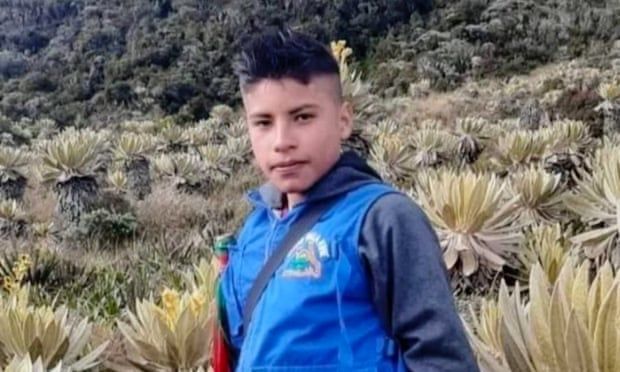 Shock in Colombia over murder of 14-year-old indigenous activist

Breiner David Cucuñame was shot dead while on patrol with the unarmed group Indigenous Guard
A 14-year old indigenous activist has been murdered in Colombia, prompting horror and shock at the latest in a spate of killings of environmentalists and social leaders in the South American country.

Breiner David Cucuñame was shot dead on Friday while on patrol with the Indigenous Guard, an unarmed group which seeks to protect indigenous lands from incursions by the country’s many armed groups.

Cucuñame, a member of the Nasa people, was accompanying his father when he and two other Guard members were killed in an ambush, according to the Association of Indigenous Councils of Northern Cauca (ACIN), a local indigenous organisation.

Dissident members of the now-demobilized rebel group, the Revolutionary Armed Forces of Colombia (Farc), were blamed by indigenous authorities for the murder.

“The indigenous guard are protectors of the land and the environment, and Breiner represented that,” said Eduin Mauricio Capaz, the human rights coordinator for ACIN. “The murder of Breiner is the result of a phenomenon that was years in the making. In Colombia, armed groups dominate once more.”

New figures released this week showed that last year, a social leader –whether a human rights defender, community activist or environmentalist – was killed every 60 hours in Colombia.

2021’s total of 145 victims was down from the previous year’s total of 182, but the country remains one of the most dangerous in the world for activists.

“We are deeply saddened by each case, because of the impact they have on the communities,” said Carlos Camargo, human rights ombudsman, on Monday.

Many in Colombia had hoped that such violence would have been consigned to the past when the government signed a peace deal in 2016 with the Farc, which at the time was Latin America’s largest guerrilla army.

That peace deal, at least on paper, ended a decades-long low-intensity civil war that killed over 260,000 people and forced 7 million to flee their homes. Colombia’s army, state-aligned paramilitary groups, drug traffickers, and other leftist guerrillas all contributed to the bloodletting.

But since then conflict continues to plague communities across the country, with Farc dissidents and other armed factions stepping into the void. Bearing the brunt of the bloodshed are social leaders, who in many cases are viewed as the grassroots implementers of the peace deal.

“Why are social leaders a target?” asked Elizabeth Dickinson, senior analyst for Colombia at the International Crisis Group. “Because they are often the few voices within a terrified and traumatised community who are willing to speak up against the affectations of violence, whether against their communities or the environment.

“The threats against activists are not a secret to anyone; the government has been warned repeatedly - by the community, by the military, by the state ombudsman – about the risks,” Dickinson said.

“Far too often, the response is reactive, when it is already too late, rather than doing the hard work of prevention to change the context in which these individuals work.”

Age is no shield in Colombia, where last year Francisco Vera, a 12-year-old activist, received a slew of death threats for his public speeches against environmental destruction.

Throughout the country’s decades of conflict, children have often borne the brunt, said Dickinson.

“In the area where Cucuñame was assassinated, nearly 100 minors were reportedly forcibly recruited into armed groups in 2021, often with false promises or threats,” the analyst said. “Children have lost parents to the violence, been forced to displace, and as in this case, suffered violence directly.”
Add Comment