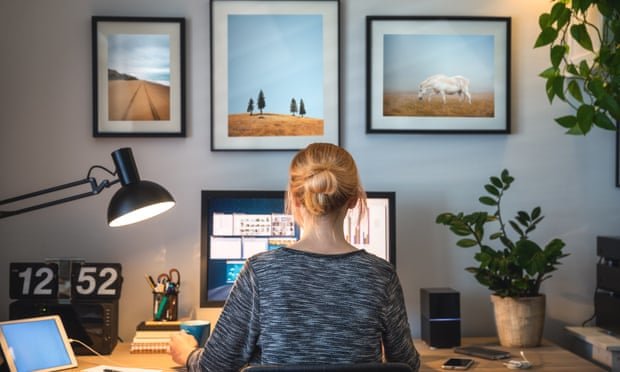 Shirking from home? Staff feel the heat as bosses ramp up remote surveillance

As management seeks more oversight of workers away from the office, campaigners fight for privacy to be respected
For many, one of the silver linings of lockdown was the shift to remote working: a chance to avoid the crushing commute, supermarket meal deals and an overbearing boss breathing down your neck.

But as the Covid crisis continues, and more and more employers postpone or cancel plans for a return to the office, some managers are deploying increasing levels of surveillance in an attempt to recreate the oversight of the office at home.

“It has really ramped up,” says Dr Claudia Pagliari, a researcher into digital health and society at the University of Edinburgh. “People are home working, and many organisations are beginning to want to track what they’re doing.”

Such surveillance comes in many forms. “Some of it is as simple as ‘checking in’,” Pagliari says, “stamping your timecard in a digital sense. You might have to do your work over the cloud, and it knows when you’ve logged on, for instance.” Tools such as Slack and Microsoft Teams report when an employee is “active”, and failure to open apps first thing in the morning is often taken by managers as the same as being late for work.

Other workers have reported more intense supervision. One communications worker, who asked to remain anonymous, said that her employer had recently started to require all staff to join a videoconference every morning, with their webcams switched on. Employees were told the move was to reduce the number of meetings, but many feel as though its true purpose is to ensure that they stay at their desks all day.

David Heinemeier Hansson, a co-founder of the collaboration startup Basecamp, which provides a software platform for companies to coordinate their remote workers, says he regularly has to turn down requests from potential clients for new methods of spying on their employees.

“There is a depressing amount of demand and it’s mostly coming from dinosaur companies who have been forced through Covid to go remote,” he says. “They think that they have to replicate – or even increase – what they do in the office.

“We went so far as to say that our API [interface which allows other developers to build additions to Basecamp] cannot be used for any form of employee surveillance.”

Silkie Carlo, director of the anti-surveillance charity Big Brother Watch, says the trend is the natural progression of surveillance in the workplace. “Now that is morphing into home surveillance it takes on a new shape and is more worrying, because some employers aren’t realising that yes, some employees are working from home, but the home still remains a private space,” she said.

“It’s important for people’s sense of autonomy and dignity, and their mental health, that the home remains a private space and we don’t go down the route of this really invasive constant monitoring of people’s homes.”

Some employers say that the monitoring they have forced on employees is required for oversight or compliance reasons.

But many employers are simply aiming for “workforce optimisation”, something Pagliari warns could have the opposite effect of that intended. “There’s not really any evidence that workers are more productive when they’re monitored,” she says. “But what we do know is that the sense of being in a panopticon can actually depress you, and make you less productive.”

Earlier this year, the consultancy PwC came under fire for developing a facial recognition tool that logs when employees are away from their computer screens while working from home.

According to PwC, it is designed to help financial institutions meet their compliance obligations, as workers would normally be monitored for security purposes on trading floors.

For Carlo, the increase in monitoring is proof that employees need legal protection against a desire for ever more data. “The consequences are going to be wild,” she says. “It’s not consent if you can’t choose.”
#Covid
Add Comment