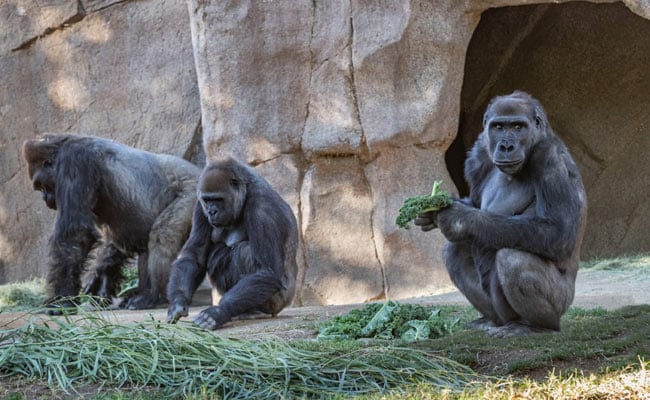 Several Gorillas At US Zoo Being Treated For Coronavirus

Gorillas at risk of developing complications were being treated with monoclonal antibodies and the zoo's whole population of 20 gorillas was being tested.
Several gorillas at Zoo Atlanta in the southern US state of Georgia have tested positive for the Covid-19 virus, the zoo said.

The western lowland gorillas were tested after keepers saw them coughing and other symptoms, it said.

Initial tests indicated they were positive for the SARS-CoV-2 virus that causes Covid-19 and the zoo said in a statement Friday it was awaiting the results of confirmatory tests from the National Veterinary Services Laboratory in Ames, Iowa.

Gorillas at risk of developing complications were being treated with monoclonal antibodies and the zoo's whole population of 20 gorillas was being tested.

"The teams are very closely monitoring the affected gorillas and are hopeful they will make a complete recovery. They are receiving the best possible care," said Sam Rivera, senior director of animal health at Zoo Atlanta.

"We are very concerned that these infections occurred, especially given that our safety protocols when working with great apes and other susceptible animal species are, and throughout the pandemic have been, extremely rigorous."

The zoo said it believed the gorillas were infected by an asymptomatic keeper, despite the employee being fully vaccinated and wearing personal protective equipment.

In any case, it said visitors did not pose a threat due to the distance between them and the primates' habitat.

The Atlanta Journal-Constitution reported that 13 of the zoo's gorillas were infected, including 60-year-old Ozzie, the oldest male gorilla in captivity.

Zoo Atlanta said it has been authorized to use the Zoetis Covid vaccine, developed for animals, and would inoculate the gorillas when they recover.

The zoo said it would also vaccinate its orangutans, Sumatran tigers, African lions and clouded leopard.