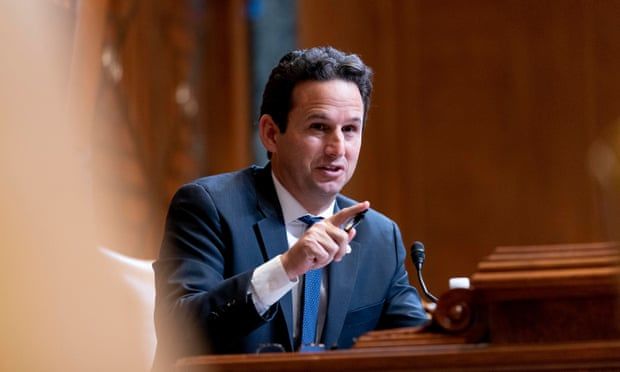 Senator urges Democrats to ‘scream from the rooftops’ against Republicans

Brian Schatz from Hawaii, who denounced Josh Hawley on the Senate floor over Ukraine, tells own side to make more noise
Democrats need to make more noise when taking on Republicans, a US senator said, after angry remarks on the Senate floor in which he denounced the Missouri senator Josh Hawley for delaying Pentagon appointments and voting against aid to Ukraine, among other flashpoints.

“Democrats need to make more noise,” Brian Schatz, from Hawaii, told the Washington Post. “We have to scream from the rooftops, because this is a battle for the free world now.”

Schatz made waves with his Senate remarks on Thursday. His immediate subject was Hawley’s decision to place holds on Biden nominees including one for a senior Pentagon position.

Referring to a famous picture of Hawley at the Capitol on the day of the 6 January 2021 attack, which the senator has used for fundraising efforts, Schatz said: “This comes from a guy who raised his fist in solidarity with the insurrectionists”.

Then he returned to his theme.

“This comes from a guy who before the Russian invasion suggested that maybe it would be wise for [Ukrainian president Volodymyr Zelenskiy] to make a few concessions about Ukraine and their willingness to join Nato.

Hawley has said he will lift his holds if the secretary of defense, Lloyd Austin, resigns over the US withdrawal from Afghanistan.

Calling that “the final insult”, Schatz said: “That’s not a serious request. People used to come to me during the Trump administration all the time. ‘Do you think Trump should resign? Do you think [former secretary of state Rex] Tillerson should resign?’ That’s stupid.

“Of course I think all the people I disagree with should quit their jobs and be replaced with people I love. Of course I think they should all resign. That’s not how this world works. That is not a reasonable request from a United States senator, that until the secretary of defense quits his job, I’m going to block all of his nominees. That’s preposterous.”

In February, Hawley tied his holds – which can be overcome, if slowly, via Senate procedure – to Biden’s alleged failure to stop the Russian invasion of Ukraine.

“If you think that Vladimir Putin and the other dictators around this world weren’t emboldened by this administration’s weakness,” he said, “by their utter failure in Afghanistan, then you’ve got another thing coming.”

In his remarks, Schatz returned to Ukraine, pointing out that Hawley was among Republicans who in Trump’s first impeachment voted to acquit him for withholding military aid to Kyiv in an attempt to extract political dirt on the Bidens.

“So spare me the new solidarity with the Ukrainians and with the free world because this man’s record is exactly the opposite,” Schatz said.

The senator was speaking in a midterm elections year, seven months out from polling day and with Republicans favoured to retake the House and maybe the Senate. Speaking to the Post, he said he wanted voters to notice his attack on Hawley.

“The central selling proposition for a lot of moderate voters was that they could put Biden in place and then stop worrying about politics,” Schatz said, adding that despite this, noise from “the Maga movement continues to grow”.

“Voters who pay a normal amount of attention to our politics take their cues from elected officials as to how outrageous something is,” Schatz said.