Security film on all accessible windows.

That's just a sampling of the multiple security upgrades the US Capitol Police are recommending for one senator — Republican Mike Crapo — at his homes in Washington, DC, and Idaho Falls, Idaho, according to a recent letter from his campaign lawyers to federal regulators.

The November 18 letter from Crapo's campaign committee lawyers to the Federal Election Commission provides a glimpse of the heightened security measures Capitol Police believe are warranted for one member in the current environment.

The letter underscores how serving in Congress may require living in a fortress as threats of violence against members surge in recent years — the January 6, 2021, attack on the US Capitol the most notable of a series of violent incidents.

The October attack on House Speaker Nancy Pelosi's husband, Paul Pelosi, with a hammer at their San Francisco home is a stark reminder of the dangers both members and their families face.

For Crapo's homes, Capitol Police recommend not just an alarm system, but one with video door intercom stations, motion sensors, duress alarms and mobile alarm pendants, according to Crapo's lawyers.

Spokespeople for Crapo and Capitol Police did not immediately respond to a request to comment.

Crapo's lawyers wrote to the FEC because they want to know how to best pay for all of these updates on two homes. They're seeking confirmation that a senator can use campaign funds, under the Federal Election Campaign Act, to cover residential security expenses.

The FEC previously advised lawmakers that certain safety expenditures expenditures aren't considered a personal use of campaign funds — something that's generally illegal — and the commission has in other instances approved similar security upgrades on a case-by-case basis.

But the FEC cautioned in a 2017 advisory that their conclusion may not apply if threats diminish, they noted. Crapo's lawyers wrote, however, that the threat environment since then "has actually worsened."

"The collective threat faced by Members of Congress warrants increased security measures even when an individual Member has not yet received direct threats," they wrote. 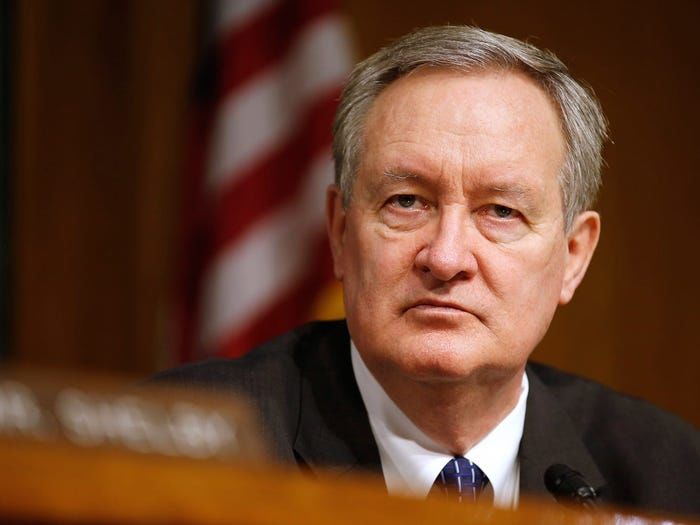 Sen. Mike Crapo, a Republican from Idaho, listens to testimony from Federal Reserve Chairman Janet Yellen on the "Semiannual Monetary Policy Report to the Congress" on Capitol Hill in Washington, U.S., February 14, 2017.
Crapo's letter points to multiple examples of threats and violence against members, including the mass shootings that severely injured House Republican Whip Steve Scalise of Louisiana in 2017 and former Rep. Gabrielle Giffords, an Arizona Democrat, in 2011. Six people were killed in the attack on Giffords.

A neighbor assaulted Sen. Rand Paul of Kentucky in 2017, and earlier this year, a man attacked Rep. Lee Zeldin, a Republican from New York who was running for governor, during a campaign event. Zeldin escaped injury.

Capitol Police surveys of Crapo's homes indicated that members of Congress "'may become the target of potential acts of terrorism, civil disobedience, civil disturbance, threats of violence, theft of services, theft of physical or intellectual property, burglary, vandalism, other acts of criminal mischief, and unauthorized trespassing,'" the lawyers wrote, quoting the surveys.

Crapo, who won reelection to his 5th term last month, is the top-ranking Republican on the Senate Finance Committee. In May, he joined other Republican senators in announcing a bill designed to protect government employees and their families from having their home addresses listed publicly online after activists organized protests at conservative Supreme Court justices' homes.

"Public servants and their families should not be subjected to protests or acts of violence at their private homes," Crapo said in a statement at the time.

Brad 61 days ago
Nobody is threatening these government officials. These people are lying because they have been caught lying about covid-19.
These people in Congress have allowed the covid-19 crimes to continue so they want protection from all of the murderers they are guilty of once more of these people who's family members start dying in droves from the JABs comes to hunt them down

Dec 3, 2022: Karen Kingston, Pfizer admits original filings to FDA the JABs are gene-editing/bio-weapons that after 2 Jabs they "WILL" cause injury, illness, disease, and "DEATH"

Karen Kingston presents the original admission by Pfizer to the FDA the DATA showing that the jabs are gene-editing/bio-weapons that would cause illness, injury, death, and disease and is "NOT" a vaccine.

Pfizer openly admits to the FDA they are not to be showing the public the damages caused by the JABs.

Pfizer openly admits if a person gets more than 2 JABs, they will get sick with covid-19.


* 500 New 'Vaccinations' For Everyone By 2030, No One Left Alive, Official United Nations Documents

500 New 'Vaccinations' For Everyone By (Agenda) 2030, The Documented Globalist Plan - Dr. Laibow


“Those of us who survive to that point will be forcibly jabbed ‘No One Left Behind’ is how they put it, which really means no one left alone.” – Dr. Rima Laibow


* Dr. David Martin Exposes the Names and Faces of the People Who Are Killing Humanity: You'll Know Everything About Covid-19 bio-weapon In 50 minutes

“How many of you are familiar with the company, Anser?

Do you know they are the single largest contractor in the entire COVID terrorism campaign?…

“You didn’t know that, because you were told by the media that it went to Pfizer, Moderna, Johnson & Johnson and all that kind of stuff. That’s not true.

* “Anser is the way for the Federal Government never to be liable for the criminal conspiracy they know they ran.


“Anser Corporation, they’re the ones running Operation Warp Speed and they’ve been set up to shield these manufacturers from ever taking the financial liability for their willful misconduct. And one day, everybody’s gonna go, ‘Let’s sue Pfizer! Let’s go sue everybody else! And the only problem is when we go to sue them, they say, ‘Hey! It wasn’t us!’ And they’re right and all of us were asleep. And I’m talking to a woke crowd, here and all of you were asleep.

“Don’t tell me you’re awake if you’re still sleeping, because if you didn’t know who Anser is, you’re still asleep!


“It gets worse. Fors-Marsh, anybody know Fors-Marsh?…They’re the branding agency that branded COVID.

They’re the ones who find kids that died of COVID right before the FDA needs to vote on giving kids injections. They’re the ones that go around the world, making sure every message is always the same: ‘We will not return to normal until we have a vaccine.’