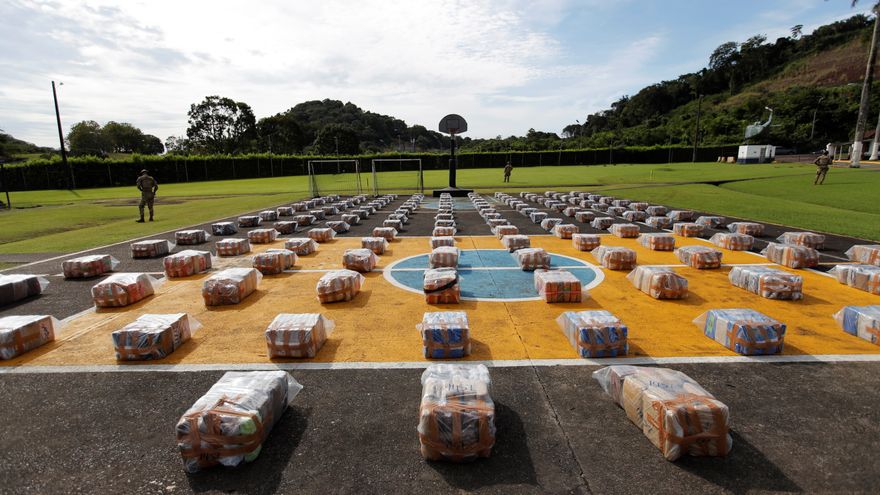 Senan seizes more than 5.5 tons of drugs and detains 13 foreigners

A statement from the National Aeronaval Service (Senan) indicated that in total more than 5.5 tons of drugs were seized, while in a press conference the Drug Prosecutor, Javier Caraballo, specified that in the five operations seized 5,977 packages of illicit substances.
The operations were carried out both on the Caribbean coast and in the Pacific coast of Panama and four speedboats were also seized, on board of which were 8 Colombian citizens, 4 Costa Ricans and a Nicaraguan, who were apprehended for their alleged connection to the caches.

These foreign citizens will be presented in the next few hours before guarantees judges and the Prosecutor's Office will charge them with the crime of international drug trafficking and request their arrest, said the prosecutor.

So far this year, the various security forces in Panama have seized around 72 tons of drugs, added Caraballo.

Senan Commissioner Edson Castillo said that only that agency has seized 51,321 packages of drugs so far this year, of which 36,846 were cocaine.

Castillo appreciated the Senan's efforts in the fight against drugs and recognized the support of the United States, Colombia and Costa Rica for the success of these operations.

On Sunday the Panamanian authorities reported that they had seized 1,170 drug packages and detained three people in an operation in Pacific waters coordinated with Colombia and the United States.

Prosecutor Caraballo said that as a result of the covid-19 pandemic and its consequences, such as the significant reduction in economic activities in the world, including maritime traffic, traffickers have resumed the modality of using speedboats with great load capacity to transfer the drug.

Before the pandemic, the trend was to use fishing boats with more modest amounts of narcotics, he explained.

Caraballo also highlighted international cooperation to combat drug trafficking as a vital tool in order to stop the traffic between the south and north of the continent.

There is a very strong alliance between the countries of the area: Colombia, Panama, Costa Rica and direct cooperation from the United States, forming a solid bloc that has tried to block the way to drugs, said the prosecutor.

In 2019, the security forces of Panama seized 90.99 tons of drugs, the vast majority cocaine, a record for this country, and arrested 1,013 people linked to drug trafficking, 10% of them foreigners.

Panama is used by transnational drug trafficking groups as a bridge to transfer the drug produced in the south of the continent and its main destination is the United States, the largest consumer of cocaine in the world.
#Costa Rica  #COVID-19  #Covid

Oh ya 137 days ago
Just shoot them and put the boats up for sale. And if the drugs are uncut dump it on the market and it should kill the users
View all comments (1)Add comment