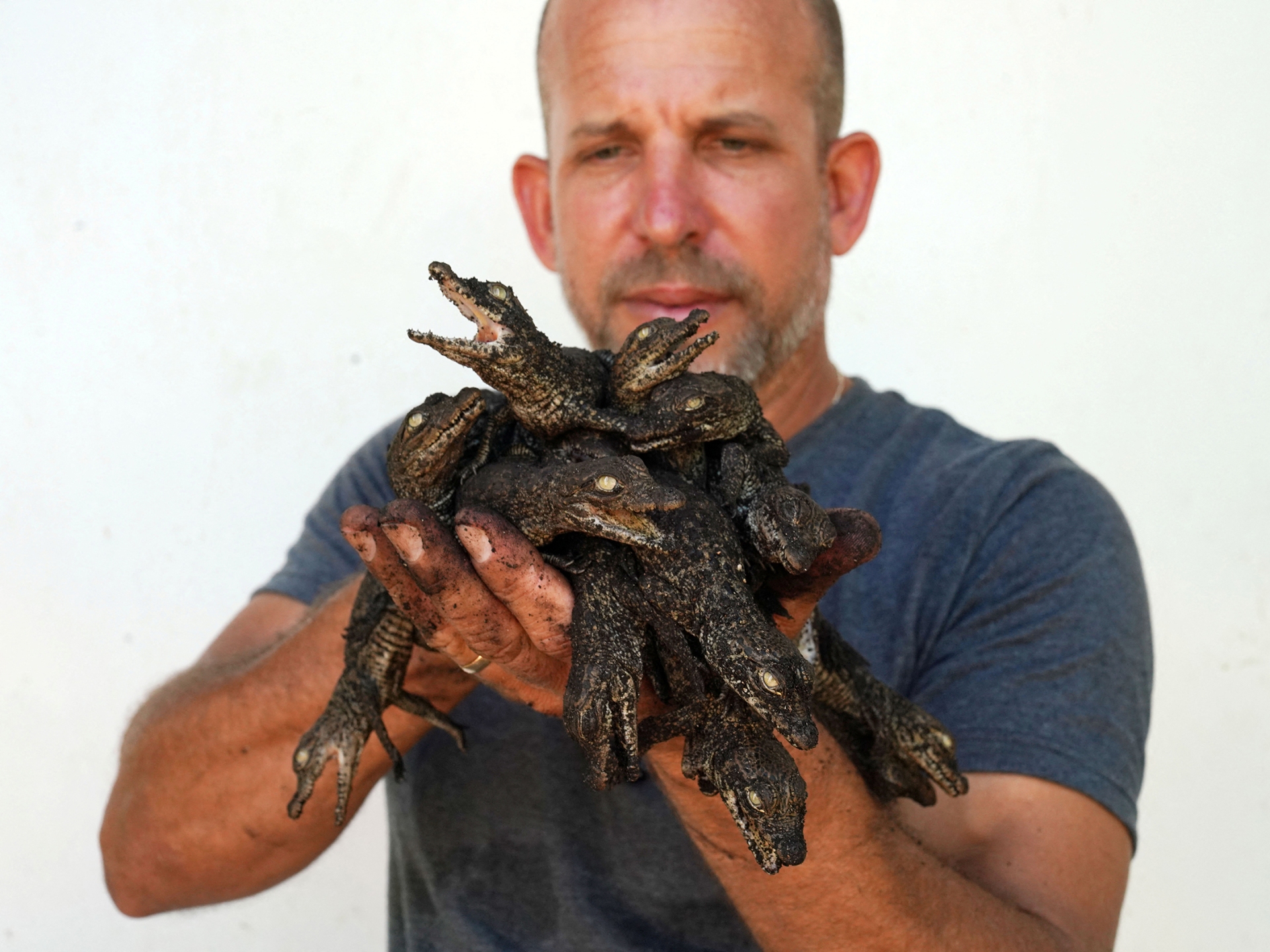 Scientists race to save Cuban crocodiles – among world’s rarest

Shirtless and waist-deep in the dark waters of Cuba’s palm-speckled Zapata Swamp, researcher Etiam Perez releases a baby crocodile confiscated from illegal hunters back into the wild.

It is a small victory in a bigger battle, he told the Reuters news agency. Cuban crocs, an endemic species found only in Zapata and in another swamp on Cuba’s Isle of Youth, are critically endangered and have the smallest natural habitat left of any living crocodile species, according to scientists.

Illegal hunting and hybridisation with American crocodiles – which muddles the species’ genetics – have for decades threatened populations here. A warming climate, which alters the sex ratio of newborn crocs, poses a new threat.

“We are trying to bring them back from the edge of extinction,” Perez said.

And despite the fact that the Cuban government has protected virtually all of the vast swamp – widely considered to be the best preserved in the Caribbean – that may still not be enough, scientists have said.

“When you compare the Cuban crocodile with other species in the world, its house is very small,” said Gustavo Sosa, a Cuban veterinarian at Zapata.

Cuban scientists estimate that around 4,000 Cuban crocodiles live in the wild. But because the area they prefer within the wetland is relatively small, a climate-related disaster – increasingly common now globally – could wipe out most of the population.

Those concerns decades ago prompted the Cuban government to underwrite a hatchery programme that annually releases several hundred crocodiles into the wild. Researchers like Perez also liberate crocodiles confiscated from hunters as part of a programme that has helped reduce poaching of the species.

The sale of crocodile meat in Cuba is tightly controlled by the state, and only those crocodiles with physical defects or hybrid genetics, for example, are allowed in restaurants.

An illegal market, however, can still be found in some areas, particularly around the swamp.

But at Zapata, those concerns feel distant as this year´s crop of freshly hatched crocs, still covered in mucus from their eggs, snap their jaws at pieces of fresh river fish, moving in unison as they discover their new world. 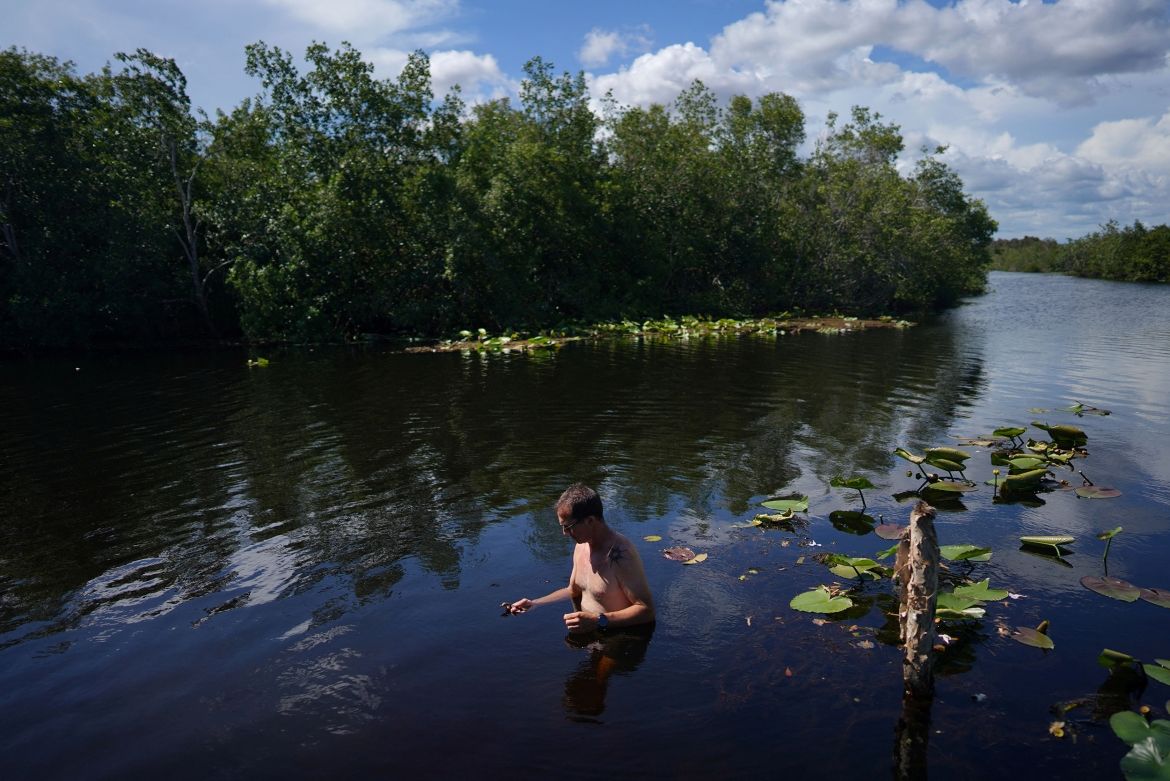 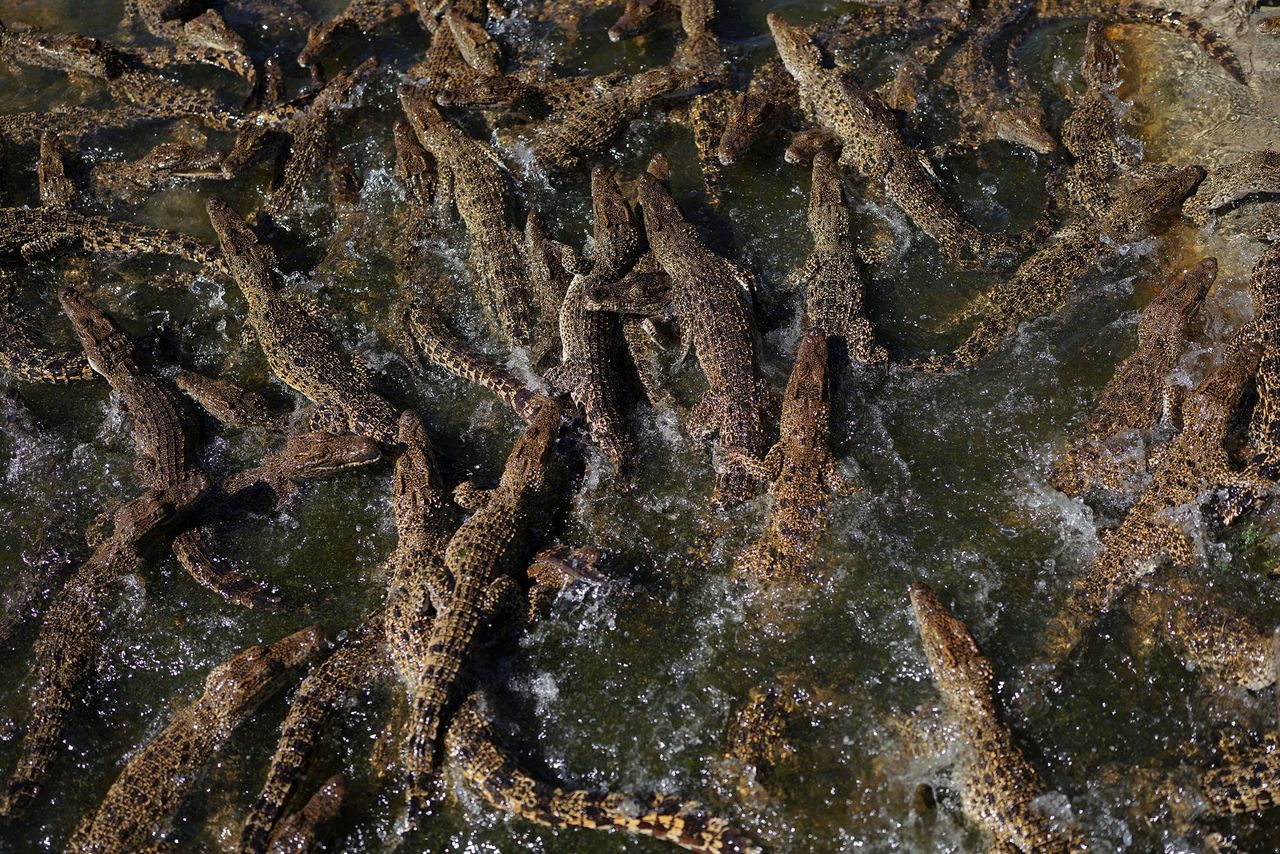 Cuban crocodiles swim at a hatchery at Zapata Swamp. The endemic animals, found only in two swamps in Cuba, are critically endangered. 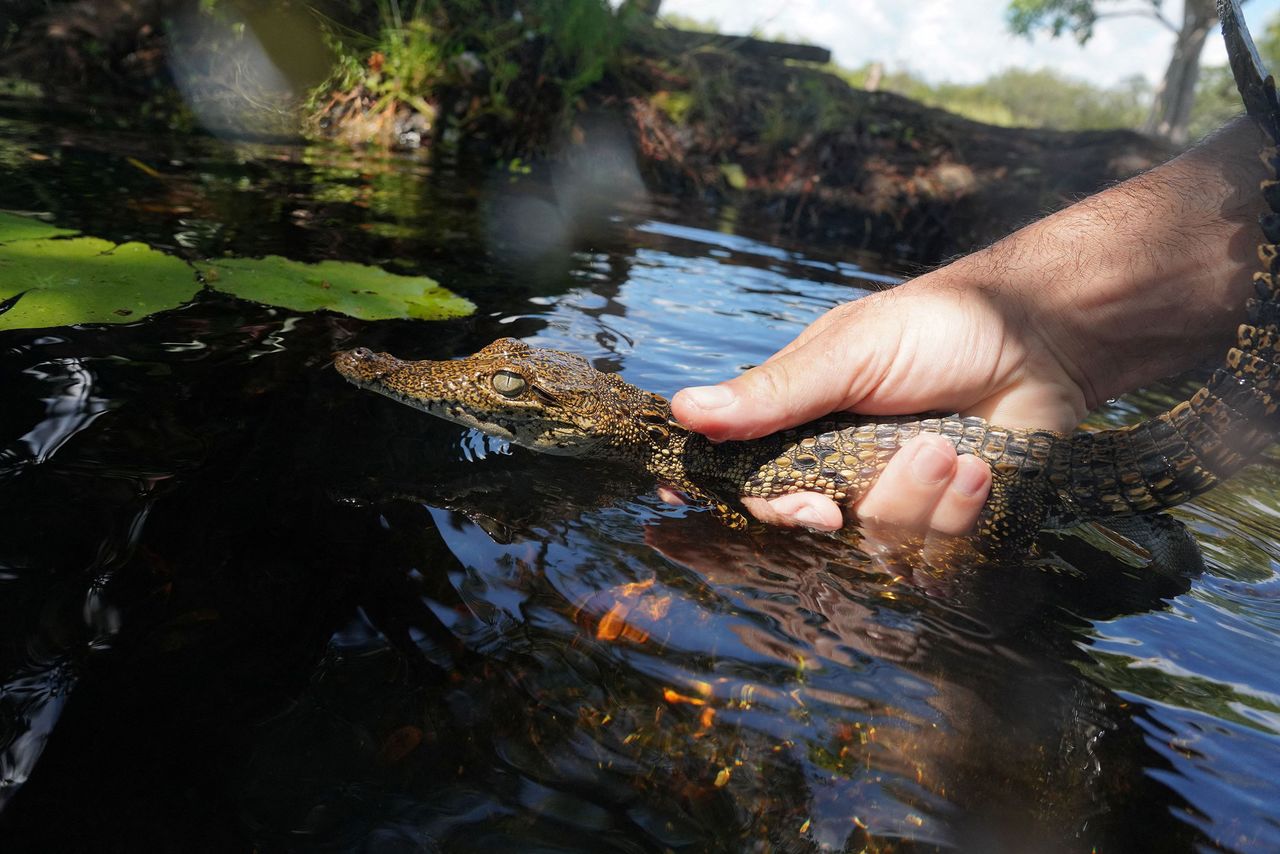 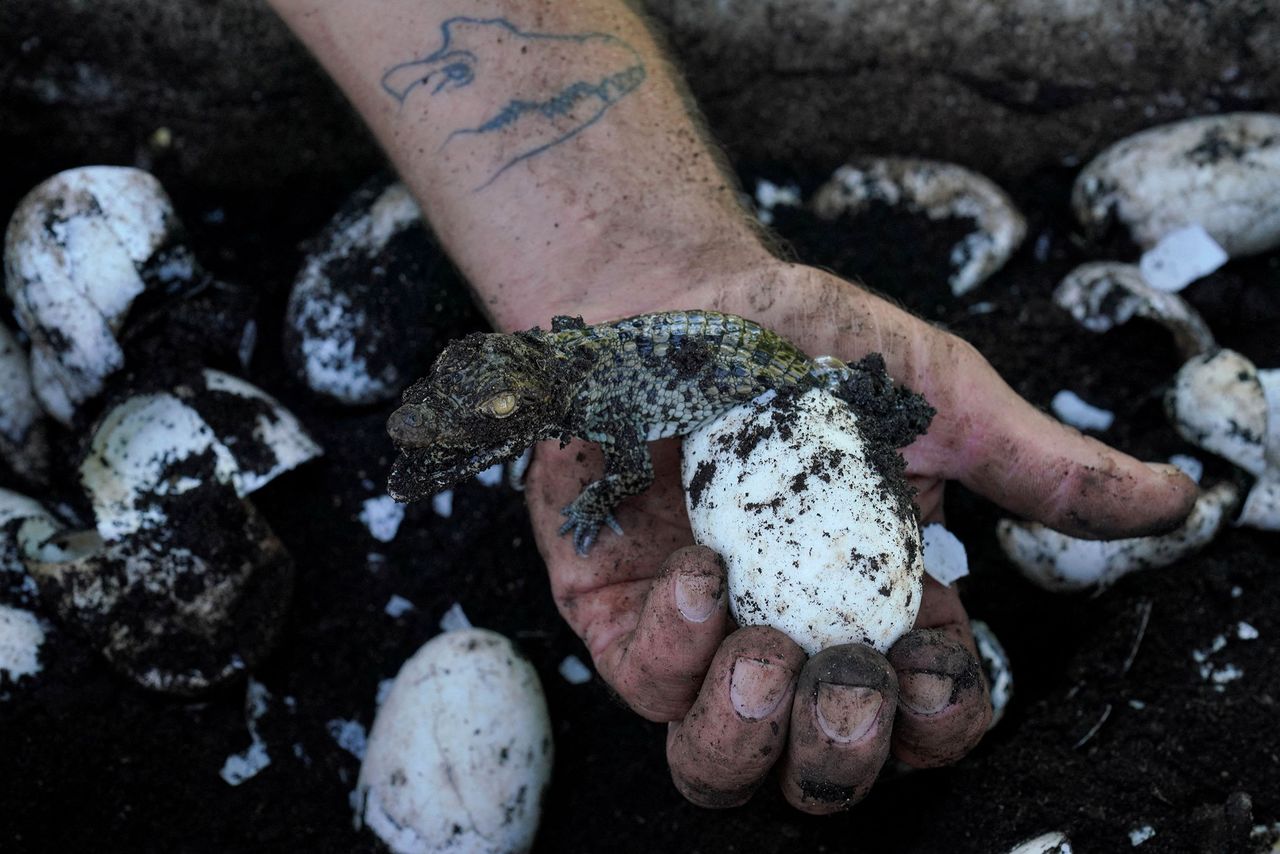 A newly-hatched Cuban crocodile emerges from an egg onto a biologist’s hand at a hatchery at Zapata Swamp. 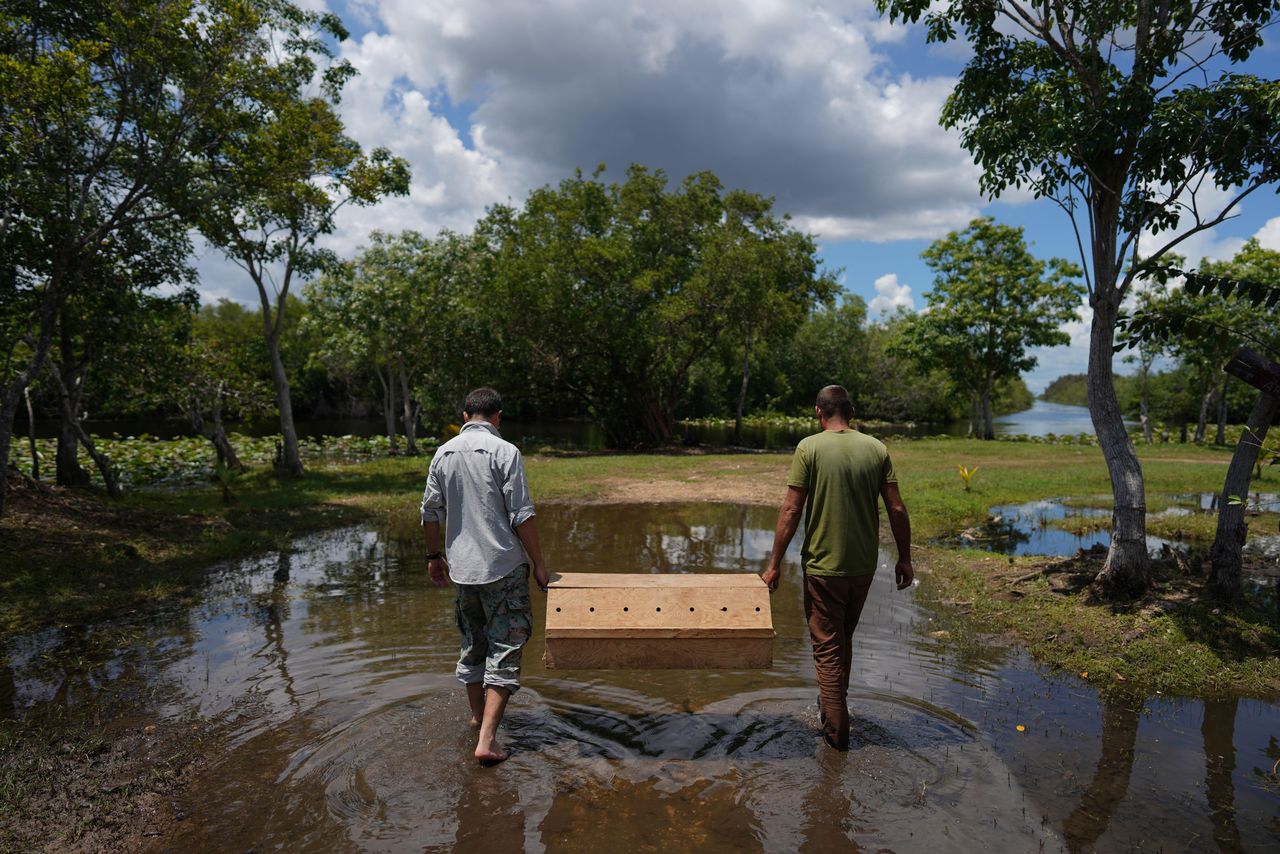 Cuban crocodiles are carried inside a box by biologists prior to being released into nature at Zapata Swamp. 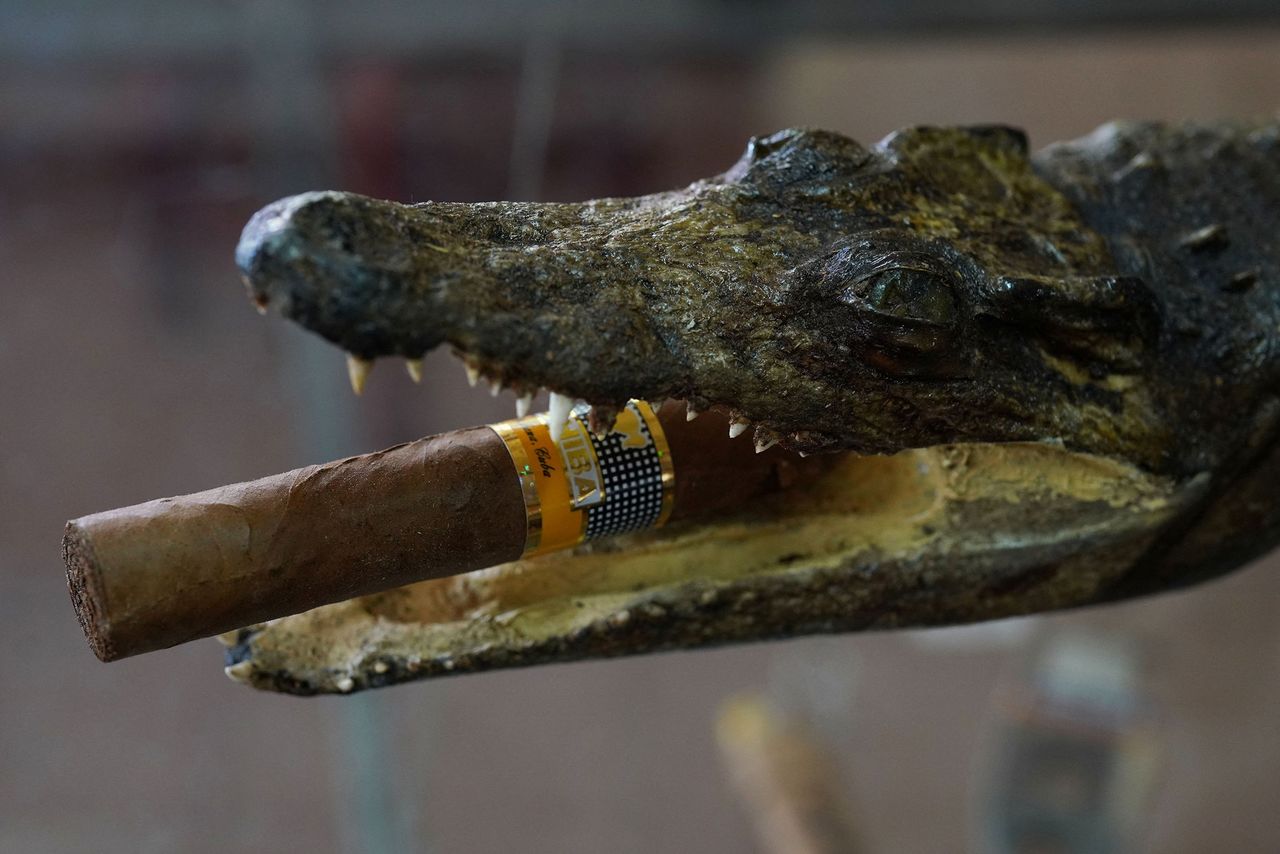 A preserved crocodile is seen with a cigar resting in its mouth inside a shop at Zapata Swamp, Cienaga de Zapata, Cuba. Cuban scientists estimate that around 4,000 Cuban crocodiles live in the wild. 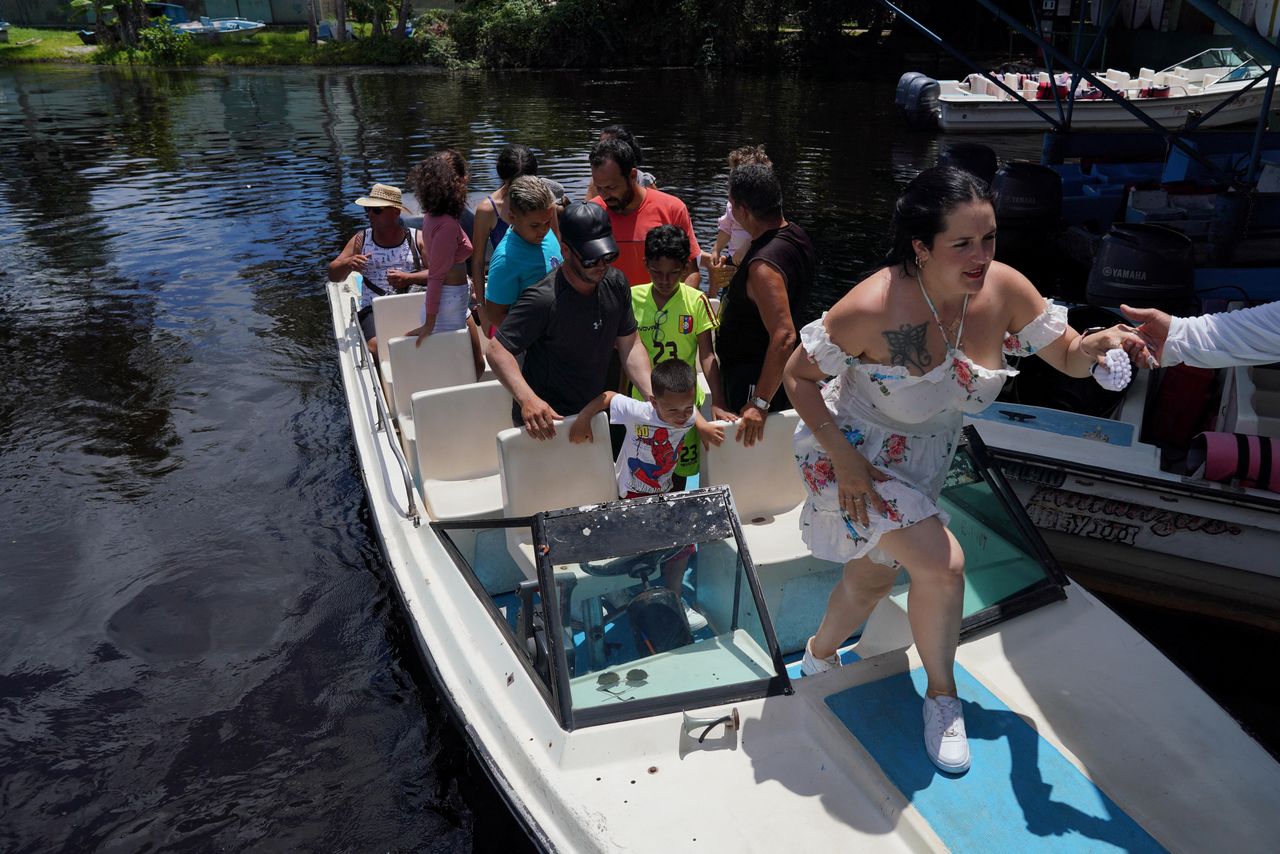 Tourists leave a boat at Zapata Swamp, Cienaga de Zapata, Cuba, one of only two habitats where the Cuban crocodile can be found. 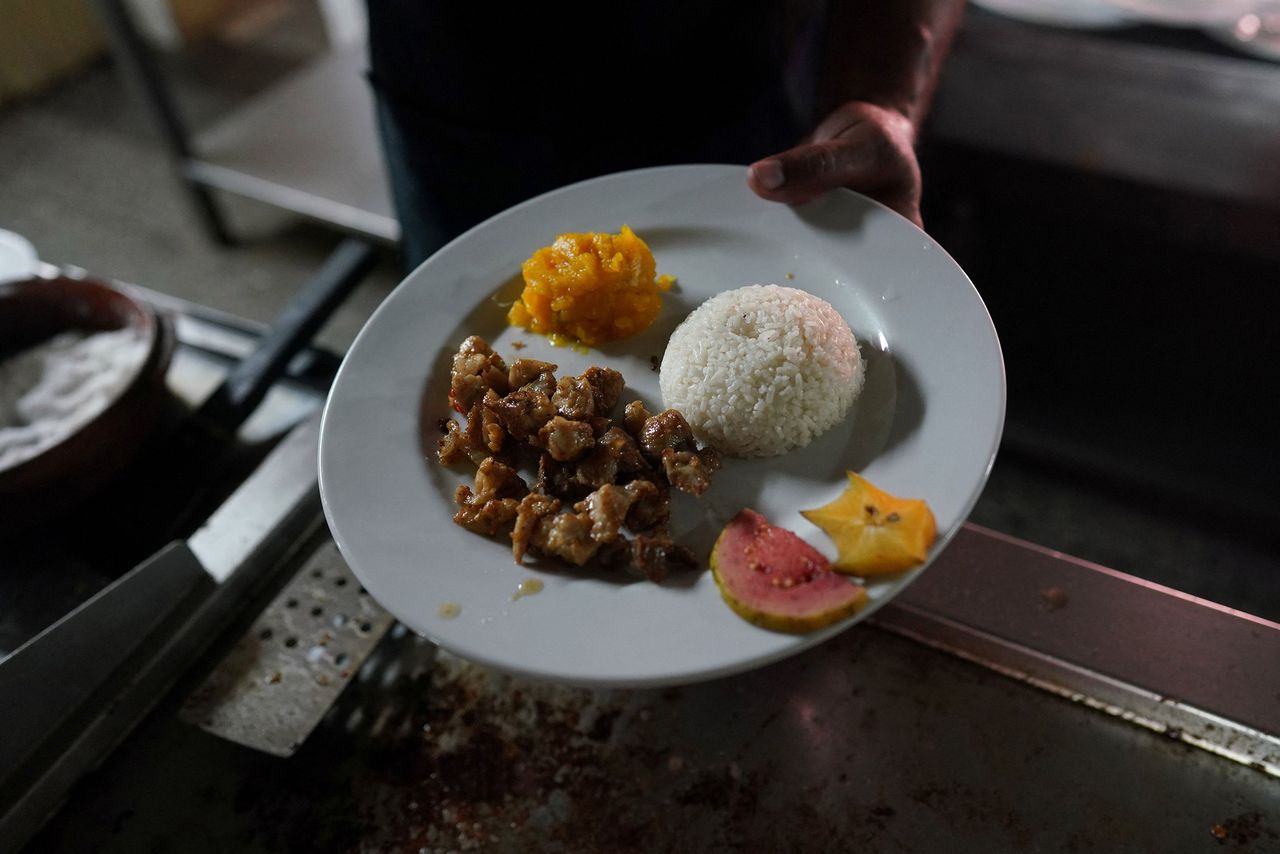 Cuban crocodile meat is ready to be served in a restaurant at Zapata Swamp, Cienaga de Zapata, Cuba. While the sale of crocodile meat in Cuba is tightly controlled by the state, there is an illegal trade in the meat. 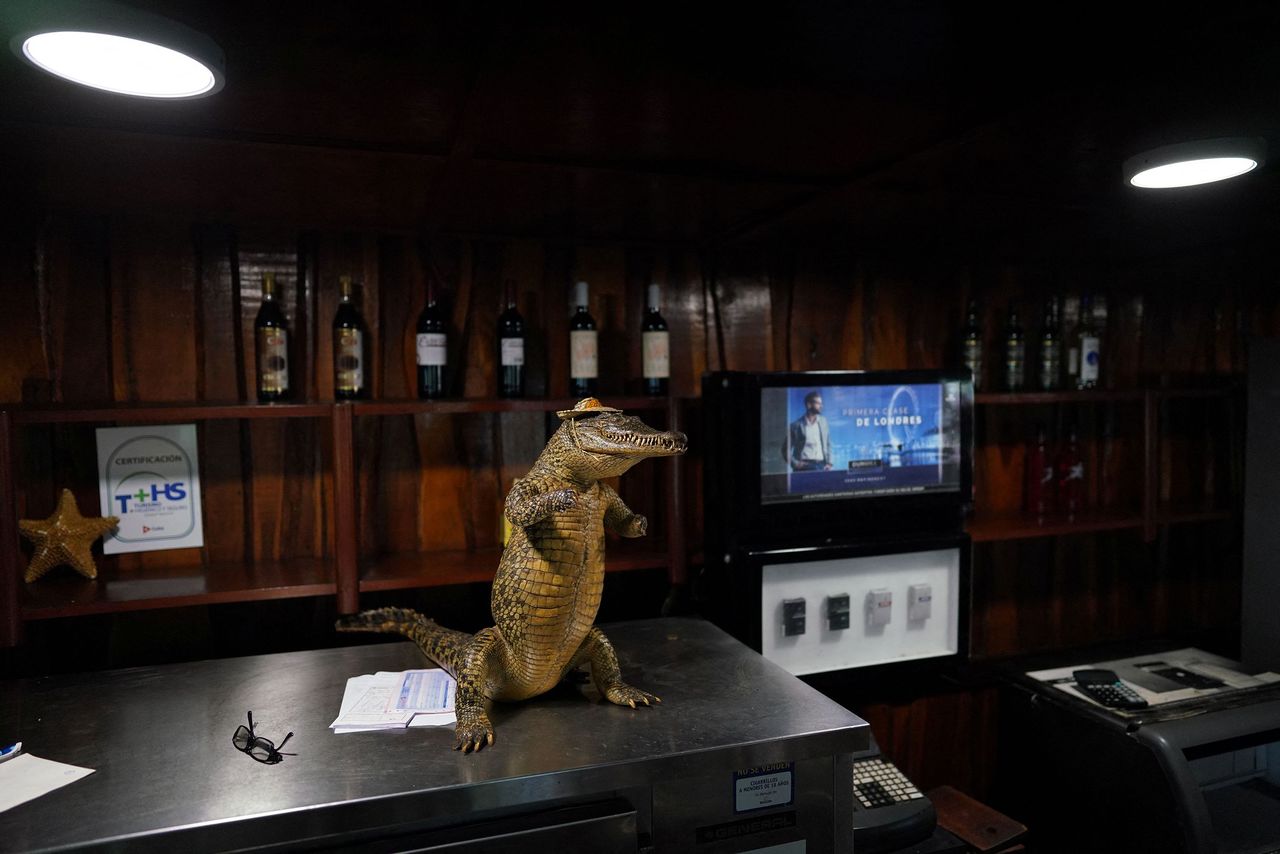 A preserved crocodile sits in a restaurant at Zapata Swamp, Cienaga de Zapata. Illegal hunting and interbreeding with other species have endangered the small crocodile population in Cuba. 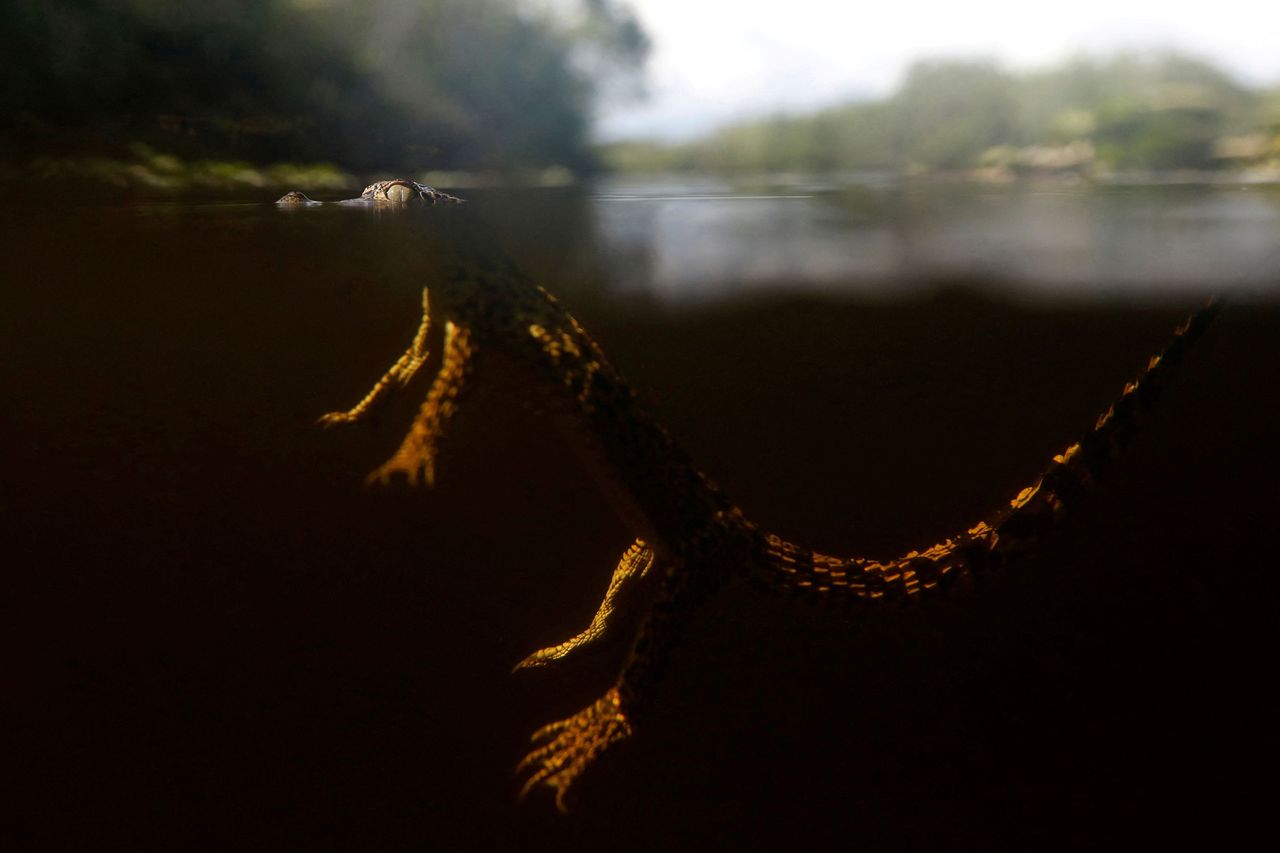 A Cuban crocodile swims during its release into nature at Zapata Swamp. These critically endangered animals have the smallest natural habitat left of any living crocodile species.