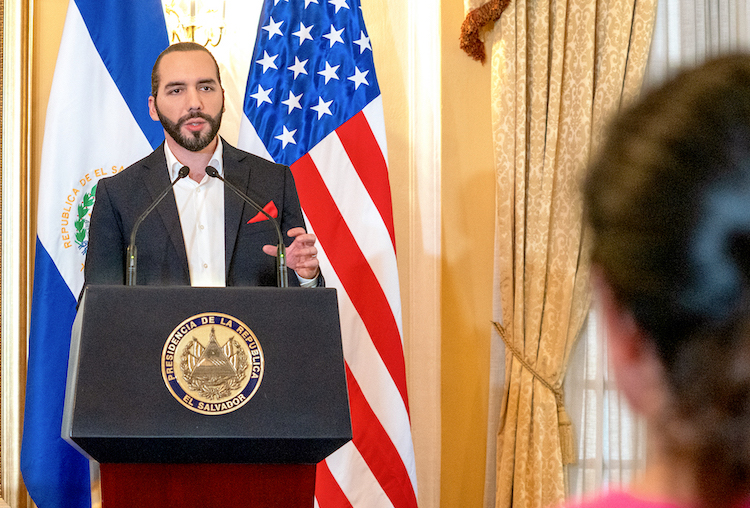 Litha María de Los Angeles slaps two cheese-filled pupusas – the El Salvadoran cornmeal flatbread – on the griddle. With a camera click on the QR code, she receives her payment: four hundred-thousandths of a Bitcoin. Then, as the rain pelts the corrugated iron roof and a gust of wind lifts the blue plastic table cloths, the power cuts out.
A tumultuous few weeks awaits El Salvador as it prepares to become the first country to adopt Bitcoin, the world’s most popular decentralised digital currency, as legal tender on 7 September. With that deadline looming, a host of challenges – technological, financial and criminal – threaten to sink the plan of the president, Nayib Bukele, to ride the Central American economy out of its current choppy waters on the back of a cryptocurrency wave.

El Zonte, a surf town with about 3,000 residents and a black sand, pebble-strewn beach, is an unlikely location for a global financial revolution. But since 2018 the town’s Bitcoin Beach project has been a petri dish for cryptocurrency adoption. Backed by Californian donors, the project gave $50 (£36) in Bitcoin to each local family, encouraged the cryptocurrency’s adoption by local vendors, and paid dozens of social projects with it, from lifeguarding to rubbish collecting.

“Now you can buy groceries, pupusas, or pay for your internet with Bitcoin,” says José Roman Martínez, 30, one of the founders of Bitcoin Beach. “For many people, this is the first time they’ve received a digital payment.”

Interest in the project from crypto-savvy tourists has given a new lease of life to El Zonte and led to a real-estate boom in the town, according to Martínez. “When I was a kid, the only thing Salvadorans wanted to do was to cross the border and head to the US. Now the kids here are dreaming of better things.”

Can a circular-economy experiment backed by a handful of foreign crypto-evangelists replicate itself at the national level? Salvadorans have had no say in the matter so far, but they are about to find out.

Bukele announced his plan to elevate Bitcoin to legal tender in June (a month before his 40th birthday) with his customary millennial elan: via video link to a Miami cryptocurrency conference. Since then, like Elon Musk with a presidential mandate, he has prolifically pumped out Bitcoin memes and promises on his Twitter account.

Just five days after the announcement, lawmakers passed the bill by a large majority. A national digital wallet called Chivo – local slang for “cool” – is in development with $30 worth of Bitcoin uploaded to each one as an initial balance. Transactions in Bitcoin will be exempt from capital gains tax, and foreigners investing three Bitcoins in the country (about $120,000) will be granted residency.

In August a research note by Bank of America enthused about the new law’s ability to reduce the cost of cross-border transactions (remittances account for 20% of El Salvador’s GDP), increase digital penetration in a country where 70% of people still do not use banks, and attract foreign investment as a first mover in cryptocurrency adoption.

Since then, however, the verdict from international financial organisations – and El Salvadorans themselves – has turned decidedly pessimistic.

“The law was adopted extremely quickly, without a technical study or a public debate,” says Ricardo Castañeda, a local economist. “I don’t think the president has fully understood the implications of the law, its potential to cause serious macroeconomic problems and convert the country into a haven for money laundering.”
#Elon Musk

Oh ya 96 days ago
Oh once you so called digital money is in your so called digital bank the government can force you too do anything they want or they will shut off your funds. You have less and less freedom every year protect what you have before you lose it. I can not believe how stupid people are to sign up for slavery
View all comments (1)Add comment