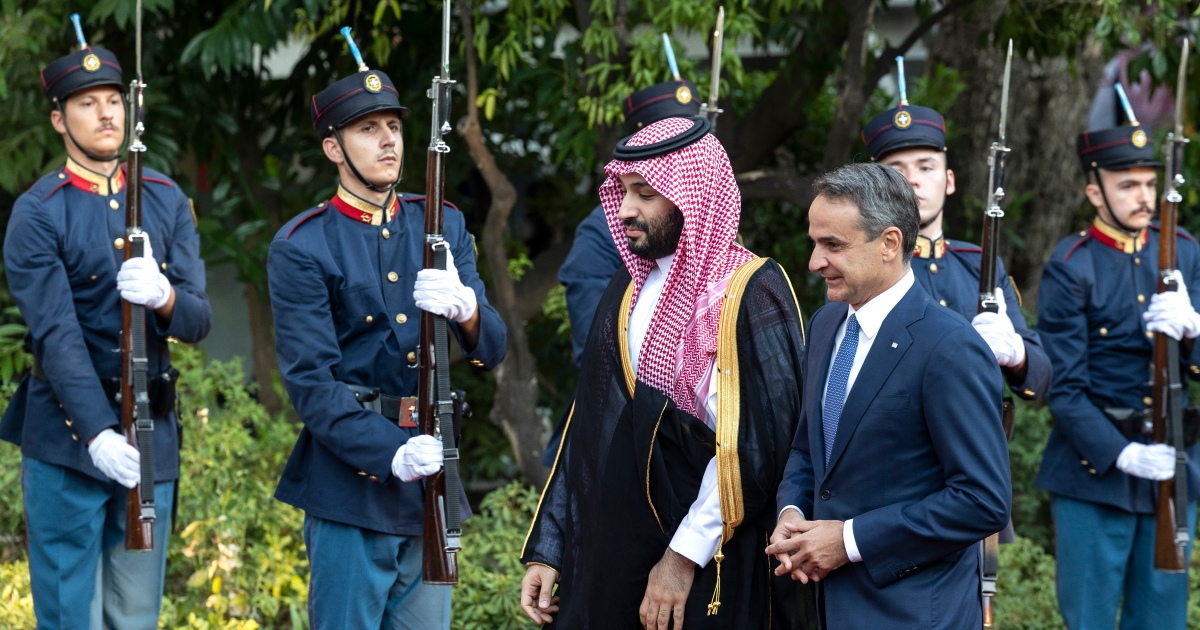 Saudi’s Mohammed bin Salman is visiting Greece and France on a his first EU visit since the 2018 murder of journalist Jamal Khashoggi.

Greece and Saudi Arabia will sign a deal on renewable energy and discuss other investments and security, Saudi Crown Prince Mohammed bin Salman (MBS) said in a meeting with Greek Prime Minister Kyriakos Mitsotakis in Athens.

MBS’s visit to Greece on Tuesday is his first to the European Union since the 2018 killing of Saudi journalist Jamal Khashoggi. He is also expected to visit France next, state news agency SPA reported.

“We can provide Greece and Southwest Europe through Greece with much cheaper renewable energy and get an MoU [Memorandum of Understanding] signed about that today,” MBS said, sitting alongside Mitsotakis.

MBS, the kingdom’s de facto ruler whose last official visit outside the Middle East was to Japan in 2019 for a G20 summit, was expected discuss bilateral ties and matters of mutual interest, according to SPA.

Greece and Saudi Arabia agreed in May on the main terms to set up a joint venture to build a data cable, the so-called “East to Med Data Corridor”, which will be developed by MENA HUB, owned by Saudi Arabia’s STC and Greek telecoms and satellite applications company TTSA.

A Greek diplomatic source has told Reuters news agency that a deal on the undersea cable along with other agreements in energy and military would be signed.

“We will be signing important agreements and we will have an opportunity to further discuss regional developments,” Mitsotakis said.

Mitsotakis was among Western leaders who have visited Riyadh since the murder of Khashoggi.

Khashoggi was a 59-year-old Saudi-born US resident who wrote columns for the Washington Post critical of MBS and his policies, as well as the Saudi government.

His killing and dismemberment by Saudi agents in the kingdom’s Istanbul consulate in October 2018 brought the powerful crown prince international condemnation, especially in the West, and tainted his image as a reformer pushing to open up Saudi Arabia, the world’s top oil exporter.

That move sealed Biden’s retreat from a presidential election campaign pledge to turn the kingdom into a “pariah” for the Khashoggi killing and wider human rights controversies.

US intelligence has implicated the prince in the killing of Khashoggi, a charge the prince and Saudi authorities deny.

MBS’s stay in Europe represents a “highly symbolic move past his post-Khashoggi isolation”, said Kristian Ulrichsen, a research fellow at the Baker Institute at Rice University.

“While there has not been any formal coordination of policy in the ‘West’ against Mohammed bin Salman since 2018, the fact is that he has not visited any European or North American country since Khashoggi’s killing,” Ulrichsen told the AFP news agency.

MBS has also received a recent boost from Turkish President Recep Tayyip Erdogan, who visited Saudi Arabia in April, and then welcomed Crown Prince Mohammed in Ankara in June.

Erdogan had enraged the Saudis by vigorously pursuing the Khashoggi case, opening an investigation and briefing international media about the lurid details of the killing.

But with ties on the mend, an Istanbul court halted the trial in absentia of 26 Saudi suspects linked to Khashoggi’s death, transferring the case to Riyadh in April.

After Russia’s invasion of Ukraine triggered a spike in energy prices earlier this year, Saudi Arabia came under pressure from the US and European powers to pump more oil.

Elevated oil prices have been a key factor in inflation in the US soaring to 40-year highs, putting pressure on the Biden administration before midterm elections later this year.

But the world’s biggest crude exporter has resisted pressure to open the supply taps, citing its commitment to production schedules determined by the OPEC+ exporting bloc it co-leads with Russia.

In May, Saudi Minister of Foreign Affairs Prince Faisal bin Farhan Al Saud said the kingdom had done what it could for the oil market.

During that trip, officials announced a deal between French energy giant Total Energies and UAE state oil company ADNOC “for cooperation in the area of energy supplies”.