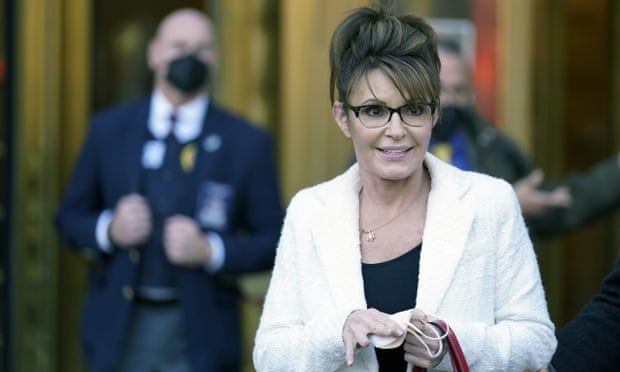 Sarah Palin announces run for US Congress in Alaska

The former governor says she will ‘combat the left’s socialist, big-government, America-last agenda’
Sarah Palin has announced her run for Alaska’s only seat in the US House of Representatives, marking her first run for public office in over a decade.

“America is at a tipping point,” Palin said in a statement released on her Twitter account announcing her candidacy. “As I’ve watched the far left destroy the country, I knew I had to step up and join the fight.

“At this critical time in our nation’s history, we need leaders who will combat the left’s socialist, big-government, America-last agenda,” she said.

It will be Palin’s first political campaign since serving as John McCain’s running mate in a campaign that saw Barack Obama elected president in November 2008.

Fiery, anti-establishment rhetoric came to define Palin’s vice-presidential campaign, which served as a precursor to the rise of Donald Trump and the modern Republican party.

Alaska’s House seat became vacant after the Republican Don Young died suddenly last month at age 88 after serving for more than four decades. Young had held Alaska’s House seat since 1973 and was seeking re-election at the time of his death.

Palin is shaking up an already unpredictable race for Alaska’s lone US House seat, where she joins a field of at least 40 candidates. The field includes current and former state legislators and a North Pole city council member named Santa Claus.

Palin, a former governor of Alaska, has kept a low profile in Alaska politics since leaving office in 2009, before her term as governor ended.

A special primary is set for 11 June. The top four vote-getters will advance to a 16 August special election in which ranked-choice voting will be used, a process in line with a new elections system approved by voters in 2020. The winner will serve the remainder of Young’s term, which expires in January.

Others who filed their paperwork by the Friday deadline include the Republican state senator Josh Revak; the Democratic state representative Adam Wool; the independent Al Gross, an orthopedic surgeon who unsuccessfully ran for US Senate in 2020; and Andrew Halcro, a former Republican state lawmaker who is running as an independent. They join a field that includes the Republican Nick Begich, who had positioned himself as a challenger to Young; the Democrat Christopher Constant, an Anchorage assembly member; and John Coghill, a Republican former state lawmaker.

Meanwhile, a man who years ago legally changed his name to Santa Claus and serves on the North Pole city council also filed with the state division of elections for the special primary. Claus, who said he had a “strong affinity” for Bernie Sanders, is running as an independent.

He said he is not soliciting or raising money. He said the new elections process “gives people like me an opportunity, without having to deal with parties, to throw our hat in the ring”.

“I do have name recognition,” he said with a laugh.
#Donald Trump
Add Comment