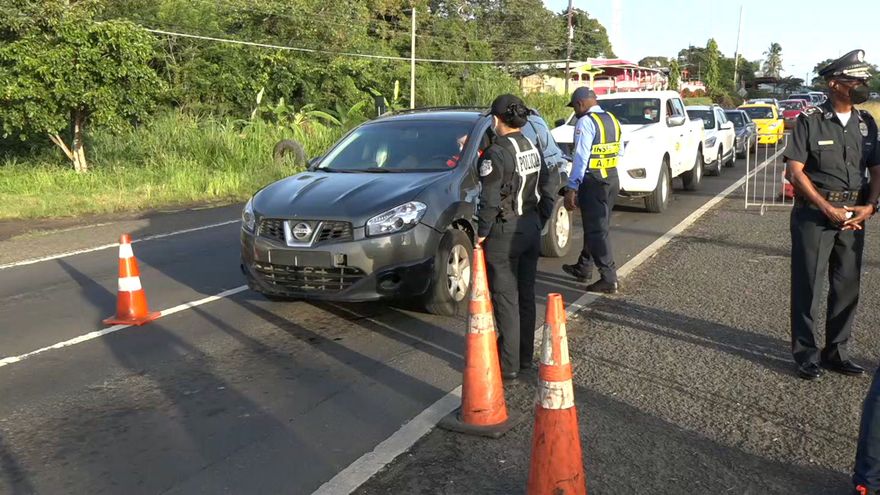 Sanitary fences raised in Panama, Minsa prohibits trips by buses to and from the interior

Starting at 5:00 am on Wednesday, December 23, the sanitary fences and checkpoints were activated in different sectors of Panama, as announced by the National Directorate of Traffic Operations of the National Police (DNOT).
The health control fences will be maintained until 5:00 am on January 4, 2021 to stop the spread of COVID-19 in the country.

The deputy commissioner of the National Police, Ignacio Taylor detailed that at the checkpoints, the left lane will be for private vehicles and the right for cargo transport and buses, so he asks the population to comply with the decree established by the authorities .

Taylor explained that when passing the fence, the citizen must carry the work card or the note requested by each company, to justify the circulation.

The control point will be located at the National Police checkpoint in the Chepo district and in Panama Oeste in the El Lago spa, Capira district.

While the health checkpoints are in Divisa, Herrera province; in La Villa, province of Los Santos; in the Chagres sector, in the province of Colón; and in Viguí, Chiriquí province.

Likewise, the Ministry of Health (Minsa), from yesterday December 22 to January 4, banned bus trips to and from the interior of the country.

The Minsa also released the list of people who can move during the curfew hours, established from 7:00 pm to 5:00 am, and during the total quarantine due to end-of-year holidays.

During the curfew and total quarantine measures, some of those who may circulate are: members of the public force, health and medical personnel that includes administrative and operational health care centers, clinics, veterinary services, whether public or private. The staff must be properly identified.
#MINSA  #COVID-19  #Covid
Add Comment