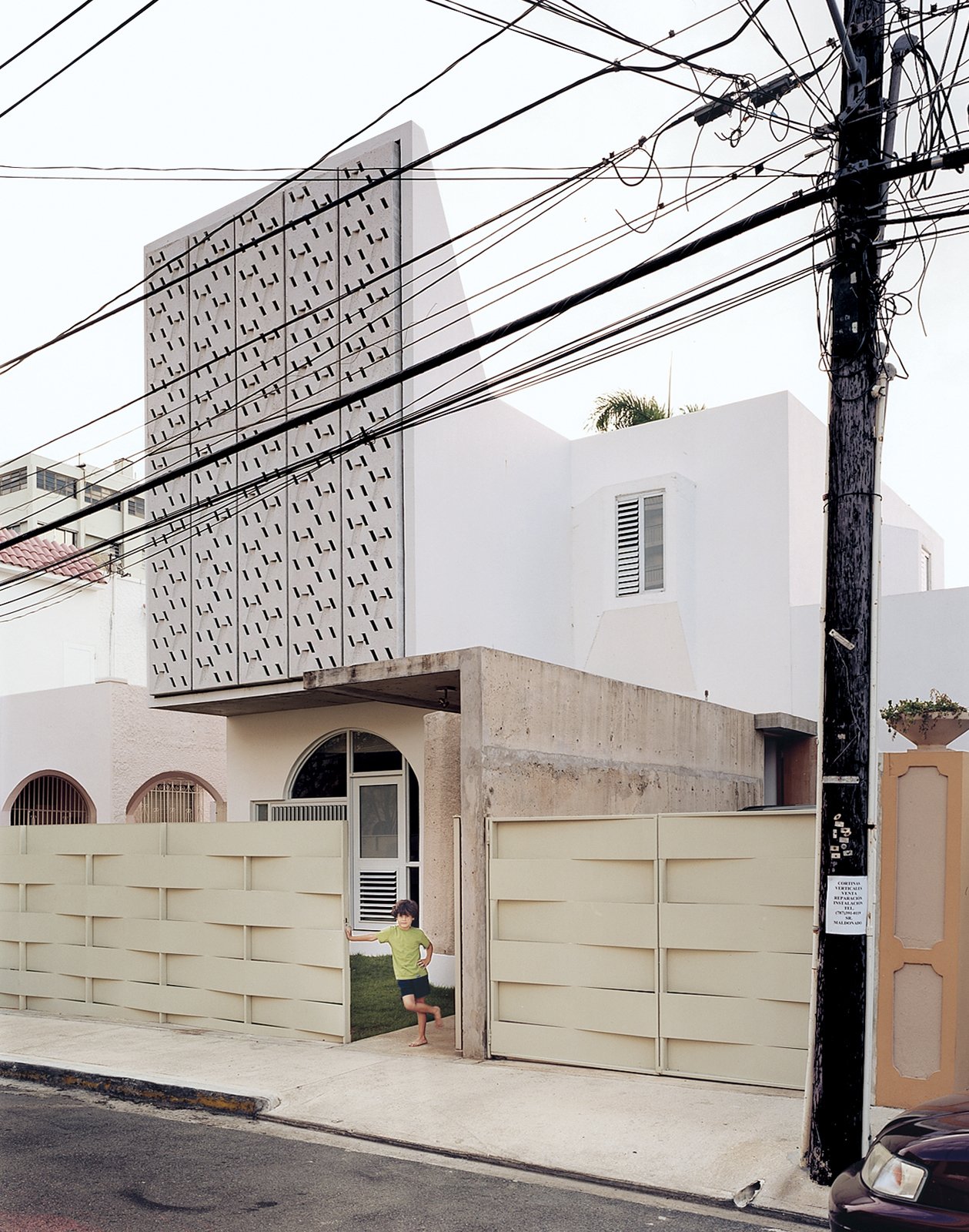 After three rainless weeks a welcome tropical shower blew into San Juan, Puerto Rico, one afternoon last May, awakening Casa Delpin with the sound of trickling water. It splattered down in sweet rivulets, dripping from diagonal slats in the concrete ceiling and dancing on the surface of a lap pool that stretches across the open living area. Eleven prefabricated ceiling panels had been perforated for just this effect. As the storm passed, sunlight filtered through the slats to reflect off the pool and onto an expanse of white wall.

In this tropical outpost of the United States, home to some of the oldest buildings in the colonial Americas, trickling water and the play of light have a long history. They were the commonplace pleasures of older San Juan homes, built as early as the 16th century with intimate courtyards in the style of southern Spain. In San Juan a subdued Moorish palette holds sway, not the candy colors one sees in much of the Caribbean.

As the city outgrew its original sandstone fortifications at the turn of the last century, outlying neighborhoods sprang up with suburban homes that turned their backs on the tropical surroundings.

The couple bought one such house, in the Miramar neighborhood, and lived in its dark warren for seven years before contemplating a change. Built in the 1940s, when Puerto Ricans tended to eat and entertain outdoors, the home had little space for guests. The yard was big enough for entertaining, but it lacked privacy and could be reached only by walking through a roundabout of first-floor rooms.

"It was like a labyrinth, and it felt very cramped," says Delpin, who is a general manager of a packaged food company. "We really bought the house for the location, and for the future. We lived in it for a while, biding our time until we had money to rebuild."

In deference to neighbors, and heritage, when the time came to rebuild the couple decided to keep parts of the original house intact-most notably the 12-foot ceilings and traditional tiles-while aspiring to a richer, more adventurous way of living. "We liked the skeleton of the house," Delpin says, "but we wanted to open it up so we could have one big space instead of lots of little ones." Most of all, they wanted to adapt the existing home to take advantage of natural light without exposing the interiors to the harsh tropical sun.

Three years ago, they consulted with Nataniel Fúster, a local architect known for a thoughtful brand of tropical modernism. He walked through the house and four days later delivered a colored-pencil sketch with a simple proposition: Reverse the arrangement of rooms so that the kitchen moved up to face the noisy street. Out back, in place of the yard, he proposed an open living area with sunlight filtering through a perforated ceiling into a swimming pool. There would be no walls or doors, just an iron screen in a basket-weave pattern for privacy and a silky cross breeze.

Hemmed in by neighbors on a narrow lot, there would be no view, but like the courtyards of Old San Juan, the living area would have water, light, and privacy. It was a sensitive reinvention of local traditions-Ponce de León meets Le Corbusier.

Delpin and Nuñez agreed to his proposal immediately, and without qualification. "He magnified the Caribbean lifestyle, with the water and sunlight," Delpin says, "but in a modern language." Fúster’s practice is in part about putting people back in touch with their surroundings. "The climate and scenery is something Puerto Ricans have tended to ignore" he explains. "We’re surrounded by water, but we turn our backs on the sea."

The renovation, completed last year on a budget of $400,000, has a graceful way of folding the past into the present. For example, the couple kept the original floor tiles, a local design with a muted geometric pattern known as isleño that was used for more than 200 years until a cheaper terrazzo replaced it in the 1950s. Fúster designed a new tile with complementary tones and a slightly more active pattern for the open living area and other additions, and the diagonal pattern recurs on the pre-cast concrete panels over the living area.

When Le Corbusier built his famous High Court Buildings in Chandigarh, India, in the 1950s, he accepted that the country’s climate and craftsmanship would conspire to give it the appearance of an artful concrete ruin. There’s some of that in the Delpin-Nuñez house, with its bush hammered walls and Rorschachs of rust around exposed metal studs.

By adopting the wisdom of age-old tropical design, the house manages a form of energy efficiency too. With cross breezes welcomed into open rooms, there is no need for air-conditioning. The clever manipulation of sunlight means the artificial lights stay off until 7:30 or so in the evenings.

More than anything, Casa Delpin is a showcase of light in its many moods. Three deep cylindrical concrete skylights protrude downward from the living room’s ceiling-two tilt east toward the morning sun, the third toward the west to pick up afternoon light. Delpin and Nuñez say they can tell what time it is from the cast of light. "In the tropics, almost any opening will create a pattern of light," Fúster says. "It’s a way of having sunlight without having the intense glare."

In the evening, after the couple’s six-year-old son Carlos has a swim in the living room and goes to bed, the family trades sunlight for moonlight, which shines through the ceiling panels and shimmers on the pool.

"Every moment has its own shapes and patterns," says Nuñez, who until recently worked as a producer in San Juan’s film industry.

The couple entertains friends on an oversized sectional of Brazilian wenge wood, and they serve an eclectic array of dishes on a concrete ceiling panel that has been turned into a glass-topped dining table. It sits in an alcove off the pool with a shallow water channel running on two sides.

"We got what we wanted," Delpin says. "We’re living the way our grandparents did, but in a new form." Intentionally or otherwise, Fúster managed to express Delpin’s sentiments poetically through the design. At the far end of the living area a curved wall envelops a 45-foot-tall royal palm tree-a relic of Puerto Rico’s past encased in a new concrete shell. 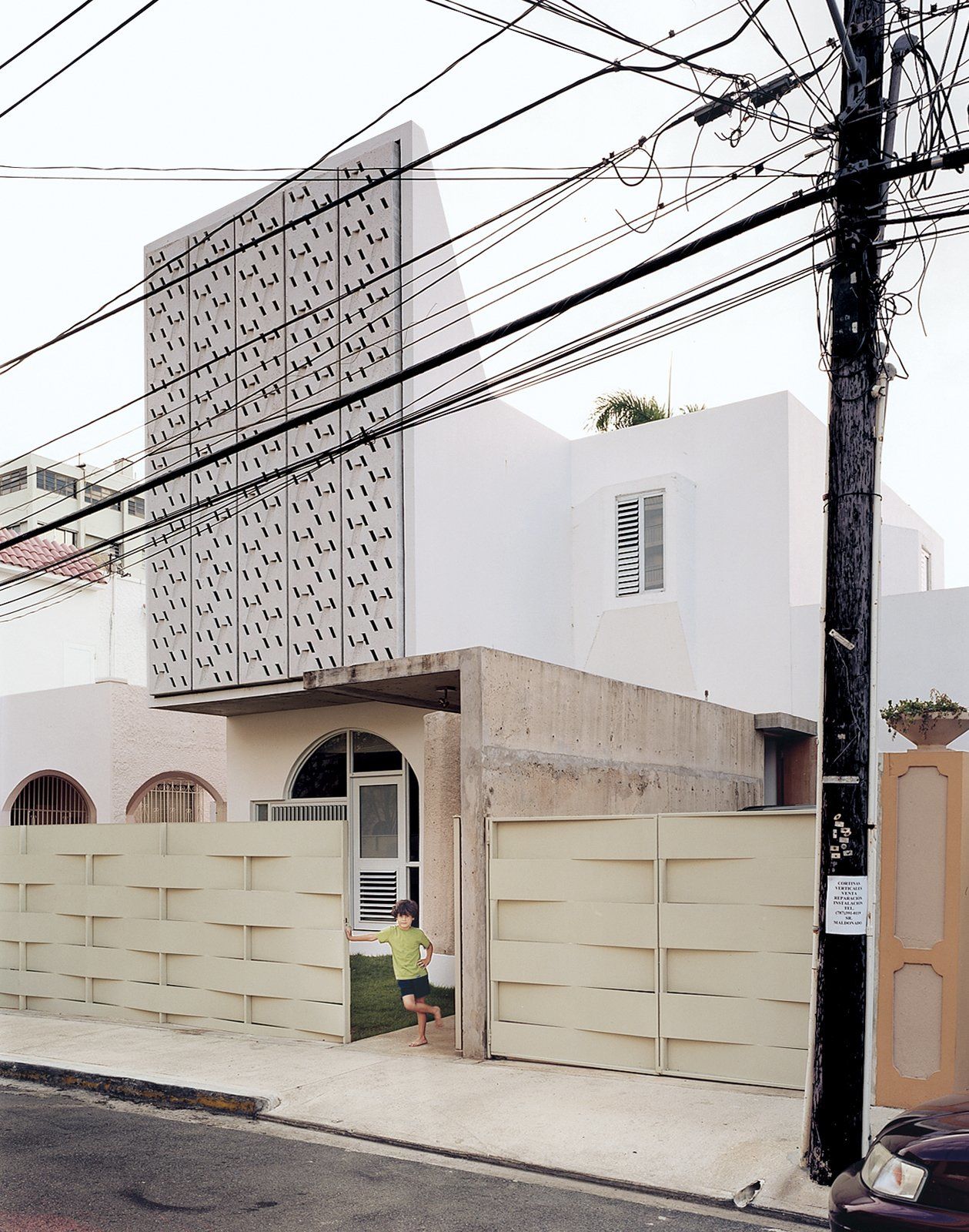 The perforated concrete panels on the façade of Casa Delpin. 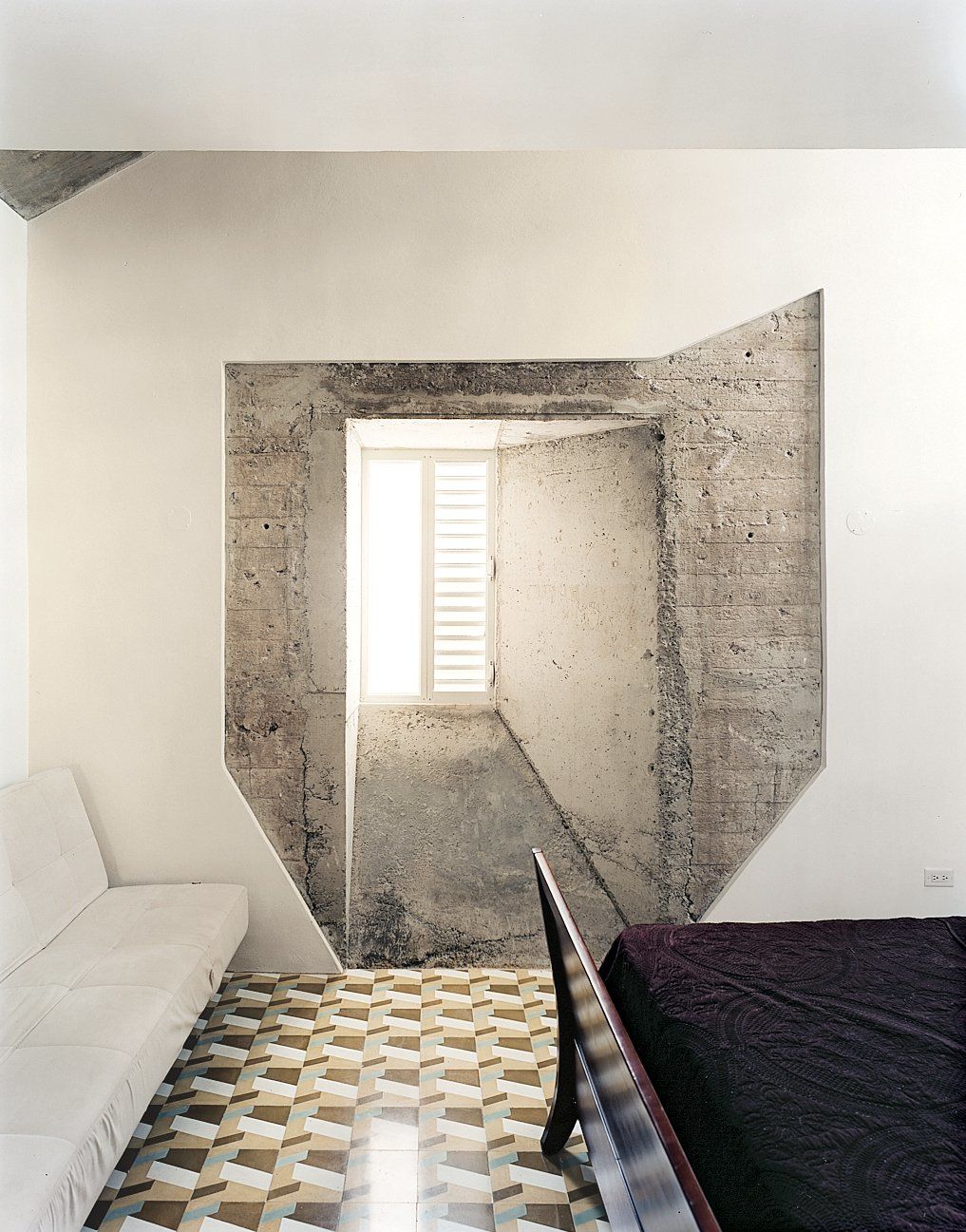 Windows have been pushed out with deep concrete wells. 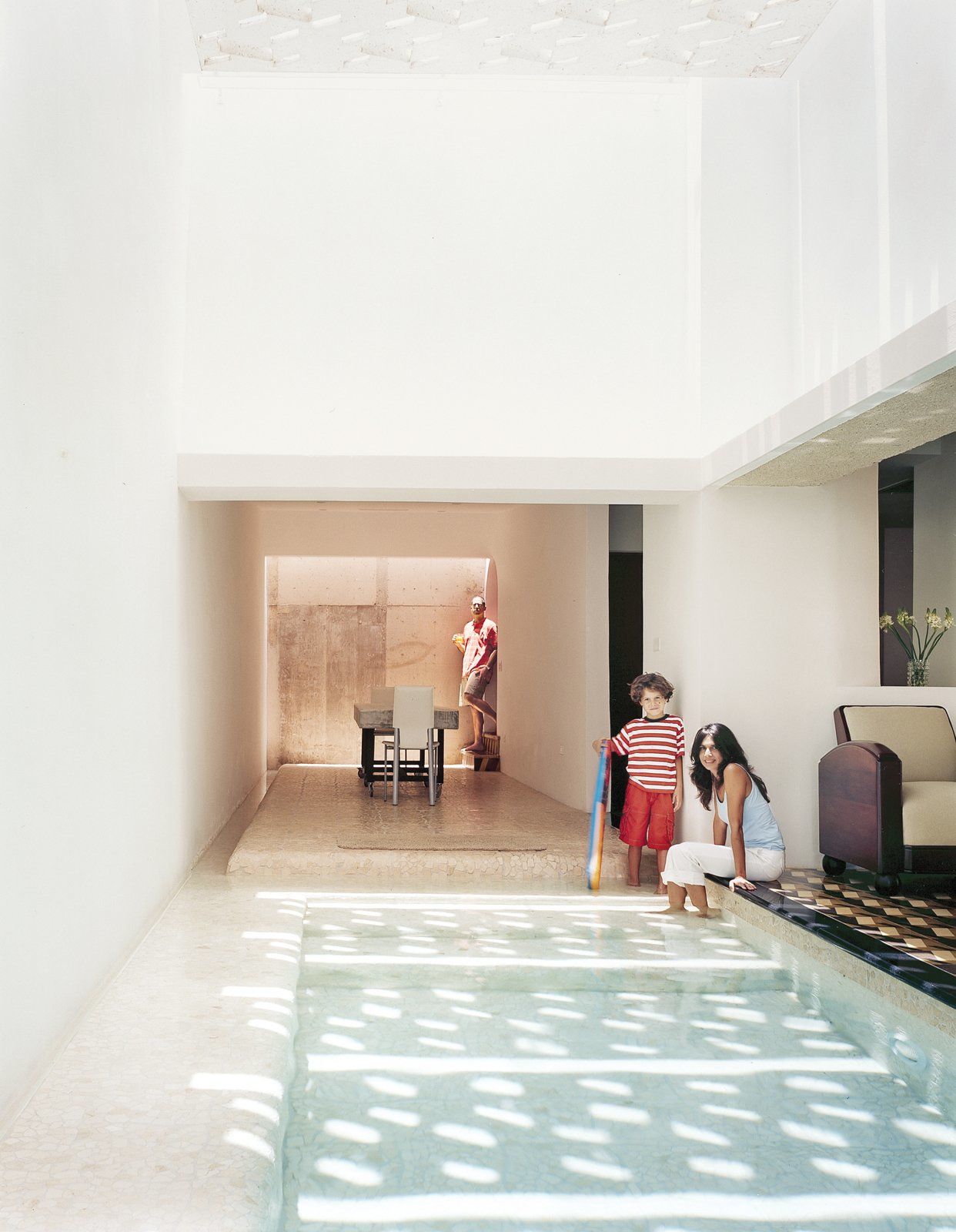 The dining area feels like an extension of the pool, with water channels on two sides. 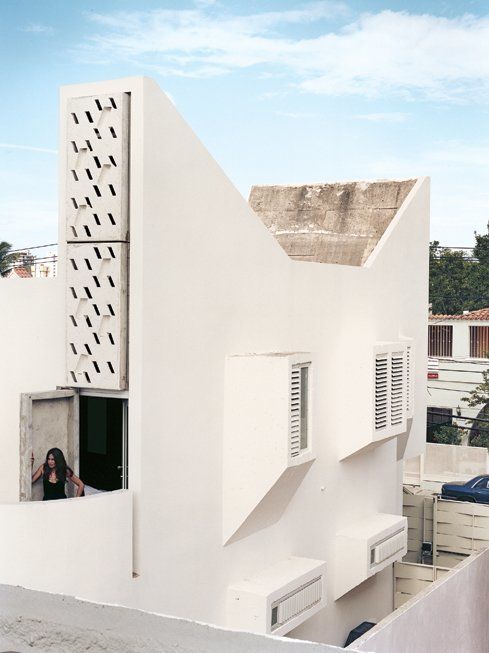 Eneida Nuñez stands on the terrace of the master bedroom. 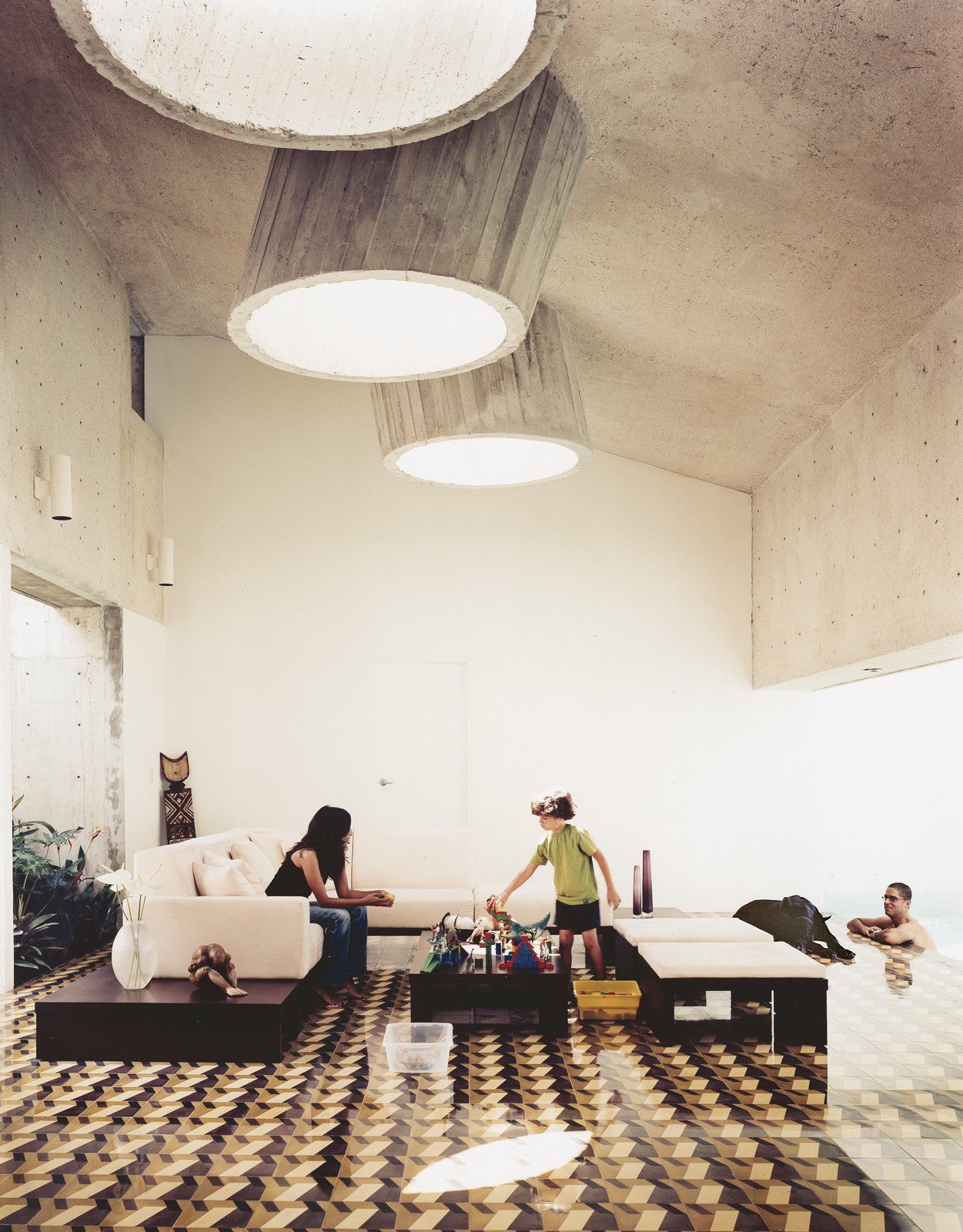 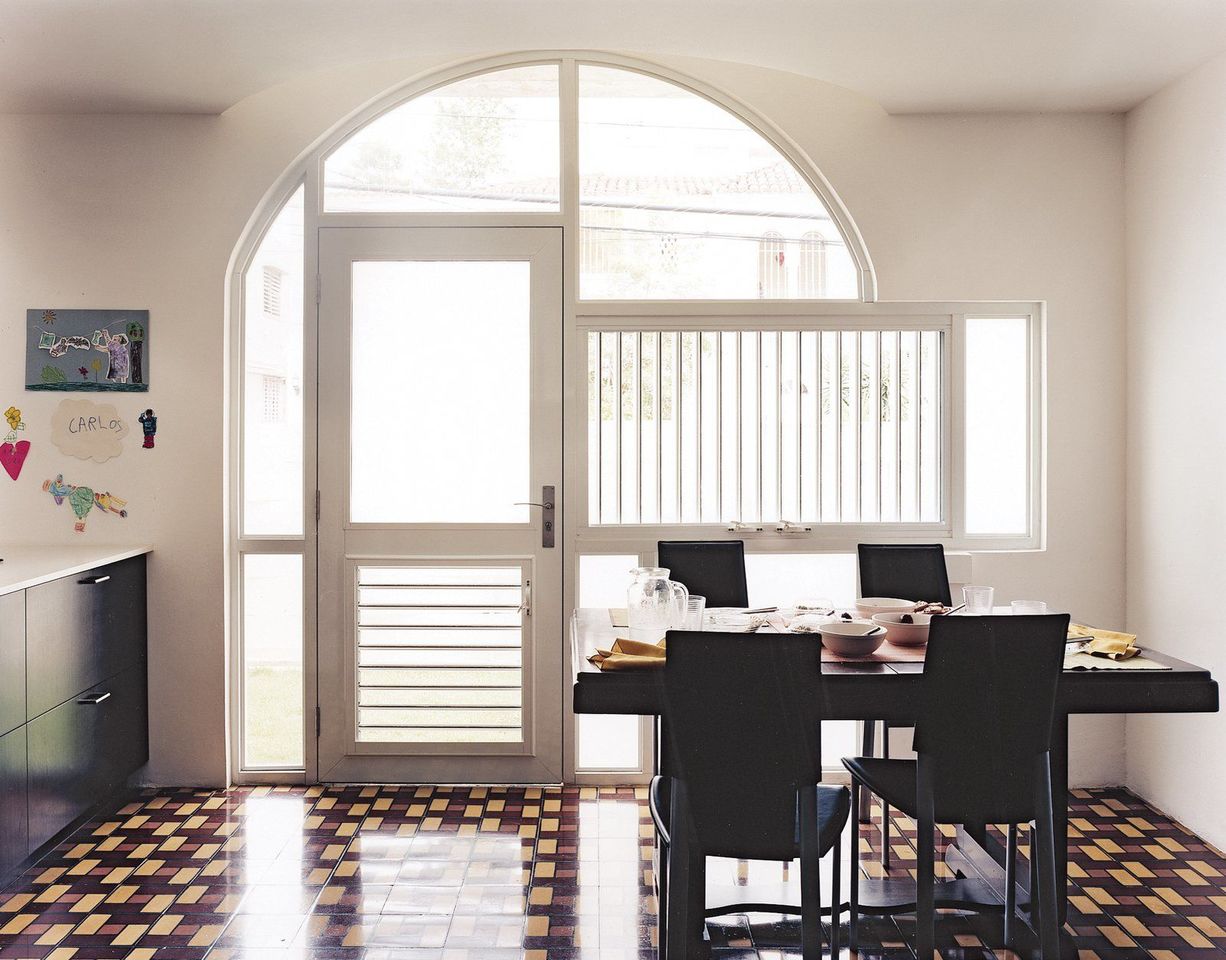 The couple kept original touches, including the arch. 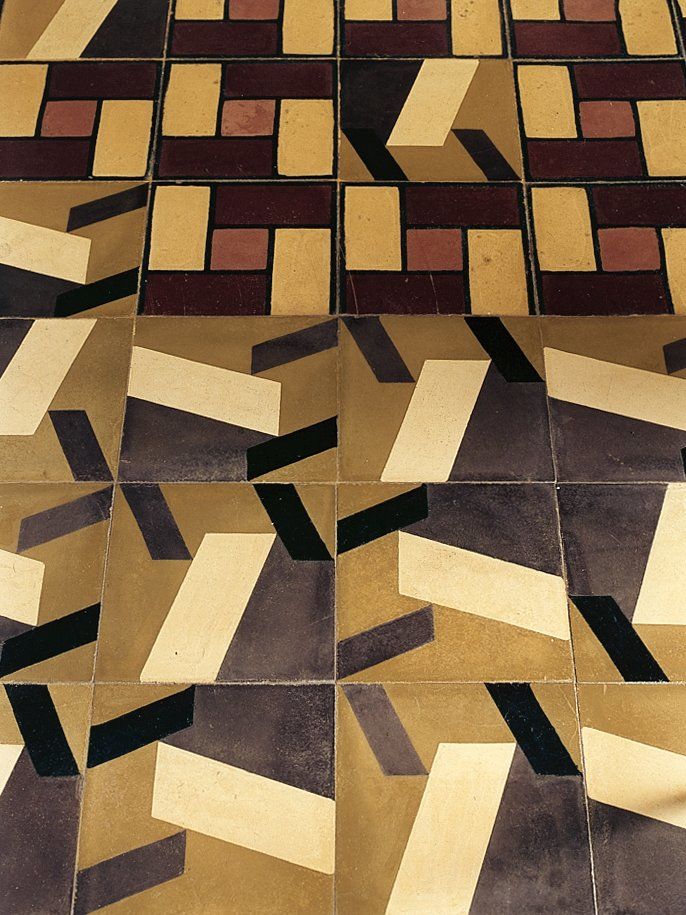 Traditional isleño tiles (at the top) were augmented with a new pattern by architect Nataniel Fúster. 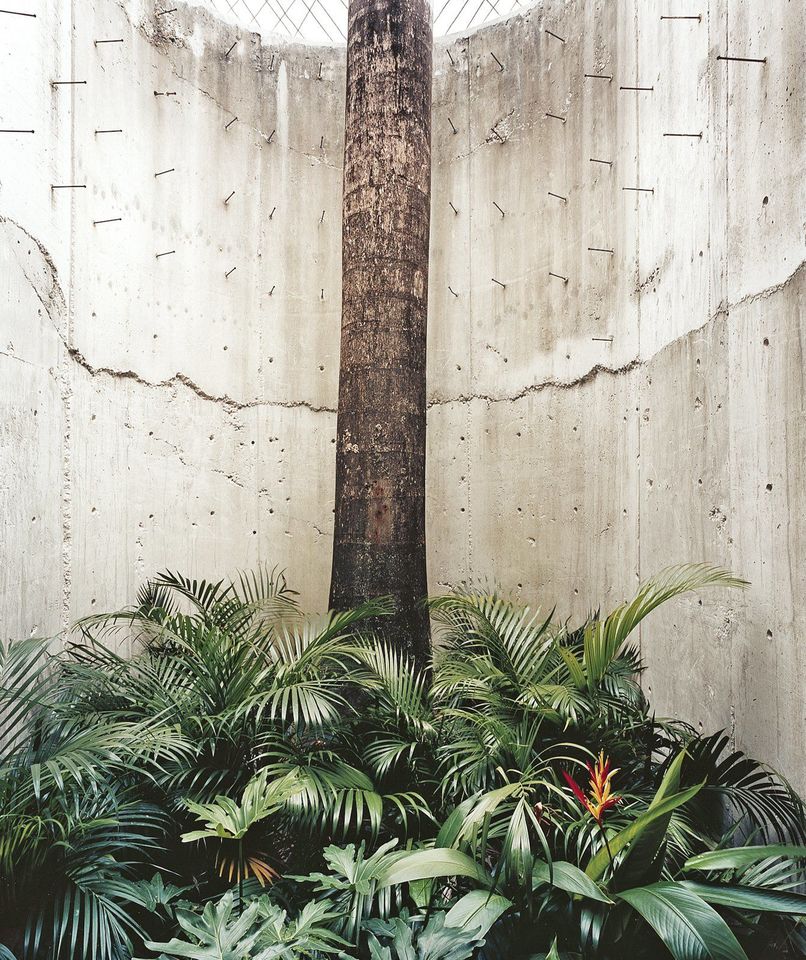 The house is largely enclosed for privacy, but hints of the outdoors, with its tropical light, are always close by. A royal palm enclosed in concrete suggests the contained foliage of courtyards found in older San Juan homes.