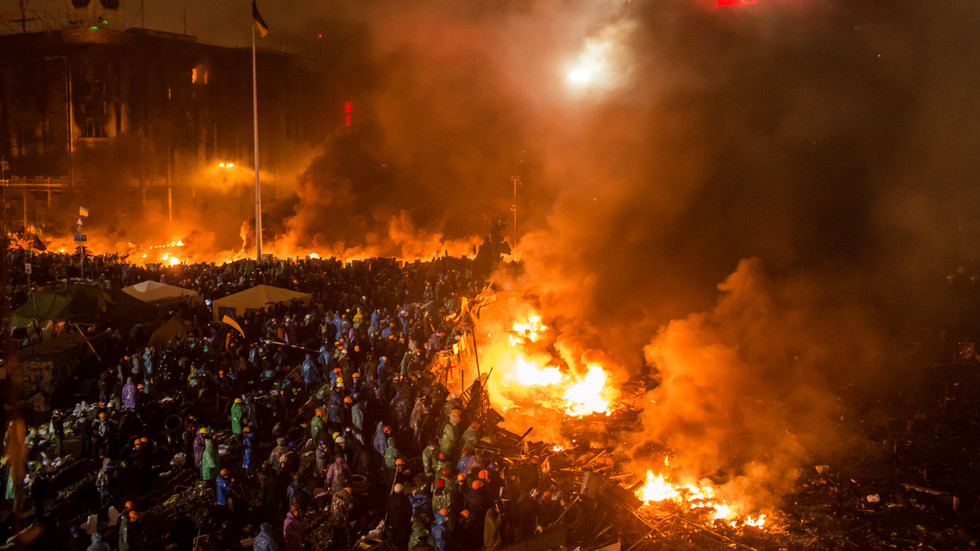 Russian military attack on Ukraine: How we got there (from the Russian point of view)

Russia began striking military targets in Ukraine early on Thursday morning, days after recognizing the independence of the two breakaway republics of Donetsk and Lugansk. Moscow insists it is protecting the people of the Donbass from Kiev’s aggression, and that it was forced to resort to military means after Ukraine abandoned diplomacy in its civil conflict in the east.

The escalation follows years of unsuccessful talks, broken ceasefire agreements, and a standoff between Russia and the West linked to the 2014 coup that overthrew the government in Kiev.

Here are the key events of the past eight years that led to this conflict.

Mass demonstrations in Kiev, which later became known as ‘Euromaidan’ or simply ‘Maidan’ protests, began in late 2013, after then-President Viktor Yanukovich decided to delay the signing of an EU association deal. The initially peaceful protests were joined by hardline nationalists and spiraled into violent riots in Kiev and takeovers of administrative buildings across Ukraine. In February 2014, pro-Western factions overthrew Yanukovich’s government, and officials with a notable pro-EU and anti-Moscow stance came to power.

While the Maidan events received widespread support in western parts of Ukraine, the eastern and southern regions, which have a large Russian-speaking population and strong historic ties to Russia, came out strongly against the events in Kiev. In cities such as Odessa, the anti-Maidan protests were soon violently suppressed. In the eastern Donetsk and Lugansk regions and the Black Sea autonomous republic of Crimea, pro-Russian protests persisted.

The Republic of Crimea and the special-status city of Sevastopol, which had continuously hosted a Russian naval base despite the entire peninsula having been transferred to Ukraine by the Soviet government in 1954, responded to the Kiev coup by holding a snap referendum in March 2014. Crimeans overwhelmingly voted to secede from Ukraine and rejoin Russia.

Moscow later admitted it used its forces stationed in the region to ensure security during the March events, while Ukrainian troops either switched allegiance, or left the Black Sea peninsula without incident. Kiev has refused to recognize Crimea’s vote and reabsorption, as did the majority of countries around the world. The new Ukrainian government’s Western allies placed restrictions on the Moscow and Crimean authorities, starting the tit-for-tat sanctions war.

3. Conflict breaks out in Donbass

In April 2014, two regions in the historic mining area of Donbass declared independence from Kiev. The Ukrainian government responded to the formation of the Donetsk and Lugansk People’s Republics (DPR and LPR) by launching what it called an “anti-terrorist operation.” Newly formed “battalions” of volunteer fighters, many of them with nationalist backgrounds, accompanied the troops sent to deal with the rebels. The assault spilled out into months of fighting, with heavy shelling in the cities of Donetsk and Lugansk, and civilian casualties and heavy losses reported on both sides.

Both Kiev and the Donbass forces accused each other of war crimes. The Ukrainian government accused Russia of directing the “aggression,” but Moscow insisted its troops never entered the Donbass.

While the fighting in the Donbass never ceased completely, it largely stopped after the internationally brokered accords signed in Minsk, Belarus. Under the second ceasefire deal between the Ukrainian government and the rebels brokered by Russia, France, and Germany in February 2015, Kiev pledged decentralization reform, providing broad autonomy to the eastern regions.

The Organization for Security and Co-operation in Europe deployed its monitoring team along the “line of contact” separating the Ukrainian army from DPR-LPR forces.

5. No reform, no peace for Donbass

Kiev and the breakaway republics have repeatedly accused each other of violating the Minsk agreements, but, crucially, the promised reforms have never materialized. The Ukrainian government continued branding the DPR and LPR officials as “terrorists” and ruled out any direct negotiations, while new rounds of talks in the same international ‘Normandy Format’ failed to produce tangible results.

In February 2022, Ukrainian President Volodymyr Zelensky said he was “not satisfied with all provisions” of the agreements, claiming Kiev and Moscow saw their implementation differently. Russia has accused Kiev of abandoning the deal altogether, as cross-border shelling continued. More than 13,000 people were killed in the conflict between 2014 and 2020, according to the UN.

6. Road to escalation in Donbass

In late 2021 and early 2022, allegations of an imminent full-scale attack intensified both in Kiev and in the breakaway republics. Ukraine’s Western allies accused Moscow of planning an unprovoked military operation that would see large swaths of the country occupied and its capital taken, while the Kremlin continued to dismiss the allegations and, in turn, accused Kiev of planning an attack in the Donbass.

Last week, officials in Donetsk and Lugansk accused the Ukrainian army of launching heavy artillery across the border. The DPR and LPR responded with a large-scale evacuation of civilians to Russia and declared the mobilization of all military-age men. Ukraine denied it was planning a full-blown assault on the breakaway republics, blaming the DPR and LPR for the ceasefire violations.

The leaders of the DPR and LPR appealed to the Kremlin on Monday to recognize the two republics as independent states. Russian President Vladimir Putin signed the recognition on the same day, citing what he said was Ukraine’s inability to implement the Minsk agreements and the continued attacks on Donetsk and Lugansk. Putin also signed friendship treaties with the DPR and LPR, which included the provision of military assistance.

On Wednesday, the Donbass republics asked Russia to help them repel the “aggression” of Ukrainian troops. Putin responded by announcing a military operation against Ukraine early on Thursday morning. He claimed he wanted to protect the people of the Donbass from what he described as “genocide” and sought the “demilitarization and denazification” of Ukraine. The president did not reveal the scope of the operation nor how long it would last.

The Russian Defense Ministry said in a short statement that it was carrying out “precision strikes” against Ukrainian military targets, without specifying their location. Ukrainian officials and media outlets have reported strikes in cities across the country, as well as alleged incursions by Russian soldiers and armored vehicles from several directions. Moscow has neither confirmed nor denied that its ground troops have crossed Ukraine’s borders.

The Russian Defense Ministry said in a short statement that it was carrying out “precision strikes” against Ukrainian military targets, without specifying their location. Ukrainian officials and media outlets have reported strikes in cities across the country, as well as alleged incursions by Russian soldiers and armored vehicles from several directions. Moscow has neither confirmed nor denied that its ground troops have crossed Ukraine’s borders.

On Thursday, Putin said Russian troops “don’t plan on occupying Ukrainian territories.” However, speaking to reporters on Tuesday, he said Moscow has recognized the whole of Ukraine’s former Donetsk and Lugansk administrative regions as the DPR and LPR. Both regions have been partly controlled by Ukrainian forces since 2015. After announcing the mobilization in Ukraine, Yuri Maximov, a senior military official in Kiev, said 46,000 reservists would join the Ukrainian army, police, and border guards.

Meanwhile, President Zelensky has been pleading with his Western allies to impose sweeping sanctions on Russia. The EU, the UK, and the US were due to announce their package of anti-Russian measures later on Thursday. The US-led NATO bloc has said it would not be deploying any troops to Ukraine.

Meanwhile, President Zelensky has been pleading with his Western allies to impose sweeping sanctions on Russia. The EU, the UK, and the US were due to announce their package of anti-Russian measures later on Thursday. The US-led NATO bloc has said it would not be deploying any troops to Ukraine.

Oh ya 272 days ago
Well western powers helped overthrow a dually elected government, and look what it has caused but the MSM will not point fingers at who is to blame NATO wants to put missiles in the Ukraine and Russia says not going to happen the same as if Iran wanted to put them in Mexico. We all remember the Cuban missile crisis. NATO promised aftervthe fall of the USSR that they would not move east and have been moving east for 30 years. Promises from NATO and the west mean nothing.
View all comments (1)Add comment