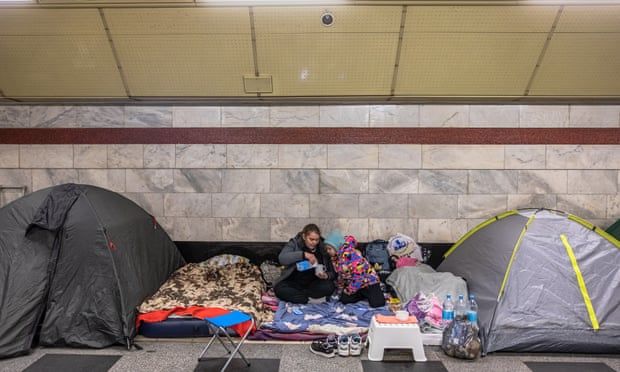 Russia could be guilty of starvation crimes in Ukraine. We must act

The absence, to date, of mass death from hunger doesn’t mean that Russian forces are innocent of the war crime of starvation
The deputy mayor of Mariupol, Sergiy Orlov, describes people sheltering in basements trying to survive without food, medicine or a power supply, and drinking melted snow because the water has been cut off. In Chernihiv, March 16, a line of 10 civilians queuing for bread outside a grocery shop were killed by Russian troops. Ukrainian intelligence reports indiscriminate shelling and targeting of agricultural machinery, fields and grain stores; and civilians are being blocked from leaving besieged towns and cities or killed whilst fleeing. This is a playbook familiar to any monitoring similar starvation crimes in Syria, Yemen, Tigray or South Sudan.

A few very elderly Ukrainians will remember the forced starvation of the Holodomor of 1932-33, when a combination of brutally enforced collectivization and punitive confiscation of food killed about three million Ukrainians through the resulting famine. It was the occasion for Stalin’s infamous remark ‘if only one man dies of hunger, that is a tragedy; if millions die, that’s only statistics.’ He was wrong: every Ukrainian knows the story, deeply carved into their collective memory. After Ukrainian independence, monuments to the victims of famine were constructed in Kiev and Kharkhiv.

It was another starvation crime that Volodymyr Zelenskiy chose to invoke when appealing to the Russians last week [16 March]. He said, ‘Citizens of Russia, how is your blockade of Mariupol different from the blockade of Leningrad during World War Two?’

During the 900-day siege of Leningrad, a million people perished of starvation and cold. Less well known is that a similar number died in Ukraine at the same time, victims of the aptly named German Hungerplan. Famine of this scale isn’t in prospect today. Scores of people have died from lack of medical care over the last three weeks and there are increasing reports of individuals perishing from thirst and suffering extreme hunger and cold.

The absence—to date—of mass death from hunger doesn’t mean that the Russian forces are innocent of the war crime of starvation. The crime is defined in Article 8(2)(b)(xxv) of the Rome Statute of the International Criminal Court as:

‘Intentionally using starvation of civilians as a method of warfare by depriving them of objects indispensable to their survival, including wilfully impeding relief supplies as provided for under the Geneva Conventions.’

Each element of the crime is engaged in Ukraine today.

First, it is intentional. The Russian commanders are waging war in such a way that, in the normal course of events, people will starve. That’s enough—the soldiers don’t need to have a blueprint for famine to be guilty of the crime.

Second, they’re attacking civilians. The lawfulness of siege tactics can be debated, but it there is no grey area when it comes to civilians: they must never become the targets of attack.

Third, it’s a war. Despite Vladimir Putin calling it a ‘special military operation’ it meets any objective definition of an international armed conflict. The International Court of Justice made this clear when it issued a provisional order to Russia to suspend its military operations on March 15.

Four, the Russians are depriving Ukrainians of objects indispensable to survival. In law, starvation goes beyond our everyday understanding of extreme lack of food. It is the denial of anything that is necessary for life, such as farms, cattle, drinking water, irrigation works, medical supplies, means of shelter, and fuel and electricity. The UN Under-Secretary-General for Humanitarian Affairs and Emergency Relief Coordinator has described the damage in Ukraine which is leaving ‘civilians without the basics for day-to-day life.’

And lastly, there are also reports of humanitarian aid convoys being blocked from accessing Mariupol or looted on their way in, and efforts to evacuate civilians from the city being blocked.

The Ukrainian Prosecutors General’s Office and civil society organisations have been documenting war crimes in Ukraine since 2014, supported by Global Rights Compliance, a foundation based in The Hague. The evidence base for starvation crimes is accumulating daily, alongside other war crimes.

It’s notoriously hard to apprehend war criminals and bring them to court. And in those cases where there have been prosecutions—such as Cambodia and Former Yugoslavia—no one has been charged with starvation crimes.

Just four years ago, the Russian representative at the UN Security Council cast his vote in support of resolution 2417, on the topic of ‘armed conflict and hunger.’ The resolution affirms that ‘using starvation of civilians as a method of warfare may constitute a war crime.’ Despite the ever-increasing use of hunger as a weapon of war in conflicts around the world, the UN has yet to utilize its authority to call out the culprits. Whether in Ethiopia, Myanmar, Syria or Yemen, hunger is inflicted with impunity.

It’s time for our tacit tolerance of weaponized starvation to end. The evidence is in our faces; the law is in our hands; what is lacking is public clamour and political leadership. Starvation crimes should be put in their rightful place at the head of the list of acts of inhumanity so reprehensible that they are prohibited without question. Ukrainians should not be condemned to starve for the third time in a hundred years.

Oh ya 51 days ago
Well I guess then the US should not have started the 2014 coup that overthrow a elected government so they could install this actor president. And was the USA that worried when they bombed Yugoslavia to ruins. But anything to say Russia Bad is fair game to the left.
View all comments (1)Add comment