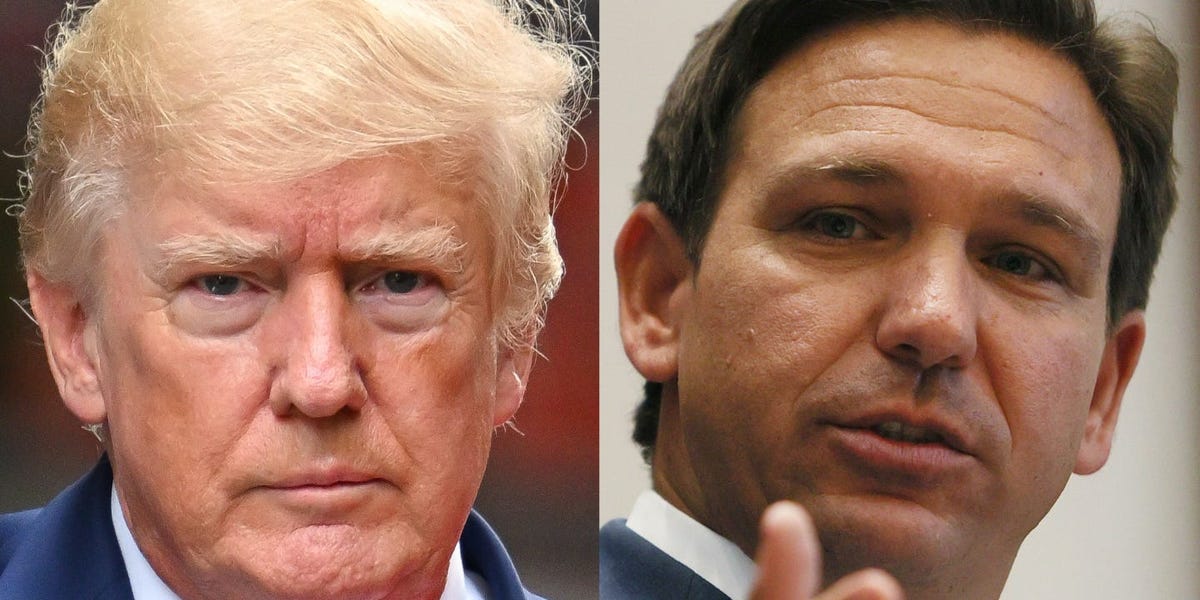 Running against Trump is more of a risk for DeSantis than peaking too soon, said a GOP strategist who was betting big on the Florida governor

It's one of the most gossiped-about stories in politics: Would Florida Gov. Ron DeSantis challenge former President Donald Trump for the 2024 Republican nomination for president?

On the one hand, running against Trump comes with a lot of risk. Trump will get vicious and will get loads of media attention, and in the end GOP competitors might only have a Trump-branded nickname to show for it all. Just ask "Low-Energy Jeb," "Little Marco," and "Lyin' Ted Cruz."

On the other hand, politicians know that sometimes the difference between winning and losing is all about timing. For example, there's broad consensus now that New Jersey Gov. Chris Christie missed his moment to run for president.

And if anyone is having a moment right now, it's DeSantis.

But at least one GOP operative — John Thomas, founder and president of the political advertising and strategy group Thomas Partners Strategies — thinks it's better for DeSantis to wait than to try to challenge Trump in 2024.

"I wouldn't advise him to go head to head with Trump," Thomas told Insider. "It's not gonna go well for DeSantis."

Until recently, Thomas was independently readying a political action committee to support DeSantis running for president.

But now he predicts DeSantis would be unsuccessful if he tried to challenge Trump. If DeSantis were to run, he said, he wouldn't have to just compete with Trump's name recognition and donor network.

DeSantis would also risk seeing what would happen if Trump's followers suddenly viewed him as anti-Trump. Right now, DeSantis is seen as not just pro-Trump but as being Trump 2.0, Thomas said. To run against Trump, he said, DeSantis would have to convince Trump's core electorate to break away from him.

"Right now he can have his cake and eat it too," he said. "He can be Trumpy and supportive. But he would have to argue that he's better, or Trump is bad. And that is a fault line that is probably a bridge too far for the Republican electorate in 2024."

During the last two years, DeSantis has been able to use Florida governor's perch to get headlines, but he'll be term-limited out by 2026, which raises the question of what he'd do to remain a GOP big shot ahead of a 2028 run.

Thomas, who also ran one of the main advertising efforts in support of then-Judge Brett Kavanaugh's Senate confirmation to the Supreme Court, acknowledged that by waiting until 2028 DeSantis may risk peaking in 2022, the year he's widely expected to win reelection in Florida.

But Thomas said the only question DeSantis should be asking is whether he thinks he can win.

"My humble strategist advice would be you can't win in a head to head against Trump today, unless there was just some kind of seismic shift," he said. "And you just have to hope that there's another moment or you can create a another moment."

The problem, Thomas said, is Trump's knack to define his opponents. If DeSantis runs and loses, but is scarred from a 2024 primary, then he could be "pretty much dead on arrival" for 2028, Thomas said.

"Trump can end careers," he said. "I think he revels in it."

Plus, plenty of other Republicans are planning to get into the 2024 race regardless of what Trump does. That means they could all go after DeSantis with opposition research to take him down, Thomas warned.

With such a large number of candidates running, Trump could take 30% of primary voters — essentially his "ride or die" base, as Thomas called them — and still win the nomination.

"I don't see how you go to to toe with Trump if Trump wants it," said Thomas, a 20-year campaign veteran who has worked in every state but Alaska. "The loyalty is so deep with Trump." 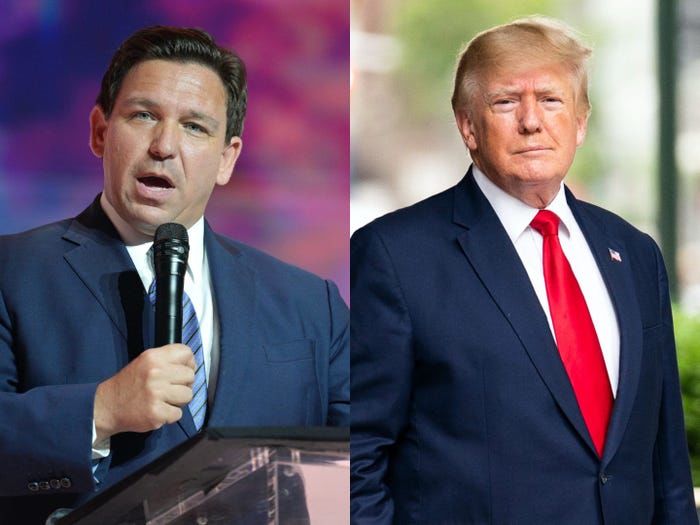 Florida Gov. Ron DeSantis and former President Donald Trump are the most talked-about Republicans in the US.

The loyalty factor is part of the reason Thomas paused his plans for a DeSantis political action committee for president. He said he saw the way that Republicans rallied around Trump after the FBI searched his Mar-a-Lago home for classified documents, and saw how Trump-endorsed candidates had been largely successful in the primaries.

"It's pretty safe to say that Trump is that difference-maker in primaries," he said. "He's still got it. He still has this vice-like grip on the Republican electorate."

Before the FBI search, Thomas said, he was looking at focus-group findings showing that "there were the beginnings of cracks in the grip Trump had on the Republican electorate." Voters were saying they were ready for someone new, but someone with a Trump agenda, he said.

But now he calls the Mar-a-Lago raid "the nail in the coffin" to conclude that arming DeSantis up for fighting Trump "would not be productive or successful."

"It turned Trump into a victim," he said of the search, "and caused people who liked him and might have softened on him to now run to his defense, and they now want Trump back front and center because he's the one that the establishment and deep state fear the most and are trying to stop."

DeSantis has stressed that he's focused on reelection in Florida this November, and hasn't said whether his future plans include the White House. But he's widely rumored to be eyeing the White House because of his ability to generate national headlines, his work stumping for candidates in other states, and the astounding amount of campaign cash he's raised for his gubernatorial race.

It's also not clear what Trump will do in 2024 or how his various legal entanglements will play out. While he has flirted with the possibility of announcing early, the former president could easily wait until the middle or even end of 2023 to reveal his intentions and still have plenty of time to qualify for the primaries.

Thomas, who hasn't talked to the DeSantis campaign about a 2024 run, said the Florida governor "appears to be going through the motions" and "has nothing to lose up until the day that President Trump announces." Then, Thomas said, DeSantis has to be ready to "catapult him to victory" in a way that would lay the groundwork for him becoming the "heir apparent" in 2028.

"DeSantis is doing the right thing, which is helping other candidates, currying political favors, doing his best to preserve the option," Thomas said. "And who knows? Maybe Trump doesn't run. But if he does run, I find the argument not persuasive to the Republican electorate that Trump shouldn't be the nominee, particularly when a lot of the Republican electorate think the last election was rigged."

Thomas does have one caveat, he said, and it has to do with the 2022 midterms. DeSantis could have an opening in 2024 if Republicans lose big in November, he said, particularly if most of the Trump-endorsed candidates lose their races.

"DeSantis could make an argument saying, 'Trump is wonderful, he's the grandfather of the party, but we need somebody who is a fighter and a winner, and Trump doesn't have that mojo," he said. "We have got to take back power, and I'm Trump 2.0. I share Trump's values.'

"He can push Trump aside basically by saying, 'We have got to win and that's the No. 1 thing here, and you're not going to be sacrificing anything on the agenda,'" Thomas said.

While Thomas thinks that could be a compelling argument, he isn't sure it'll work and warned it wouldn't be easy.

"Even then," Thomas said, "It's a tough go against Trump."