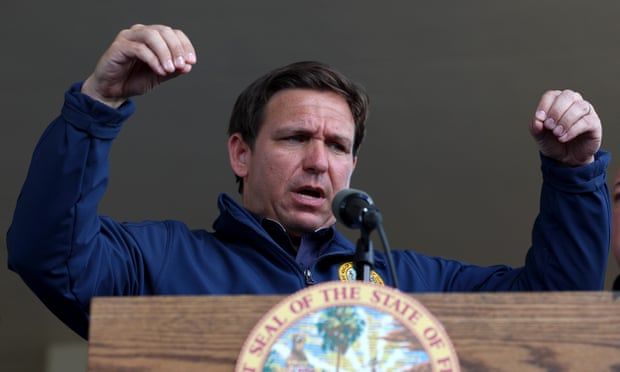 The Treasury Office of Inspector General (TIG) is inquiring into whether DeSantis used the interest earned on funds from the Coronavirus State and Local Fiscal Recovery Funds (SLFRF) program that his state received as part of Biden’s American Rescue Plan.

The intended use of SLFRF was to support state and local response to and recovery from the Covid public health emergency.

DeSantis defended his decision, arguing that the migrants had intentions to come to Florida, despite having no evidence for such a claim. The Republican governor is facing legal challenges for his stunt, including a class-action lawsuit from the migrants he transported that believe they were purposefully misled into boarding the flights.

In a letter to six House members representing Massachusetts, the treasury department’s deputy inspector general Richard Delmar wrote: “As part of its oversight responsibilities for the SLFRF, TIG has audit work planned on recipients’ compliance with eligibility use guidelines.

“In addition, as part of our oversight work of the Coronavirus Relief Fund established by the Cares Act, we have already sought information from Florida about appropriate use of those funds.”

Florida allotted $12m of its ‘Freedom First Budget’ to its transport department for “the transport of unauthorized aliens located within the state to other states within the United States of America, or the District of Columbia.” However, DeSantis’s move was called into question because the migrants were transported from another state.

Some experts believe DeSantis engaged in acts of human trafficking or smuggling. Leaders in Texas and Arizona have also bussed migrants from their states to Chicago, New York and Washington DC, sparking widespread outrage for using human beings in a humanitarian crisis to advance a political agenda.
#Coronavirus  #Covid
Add Comment