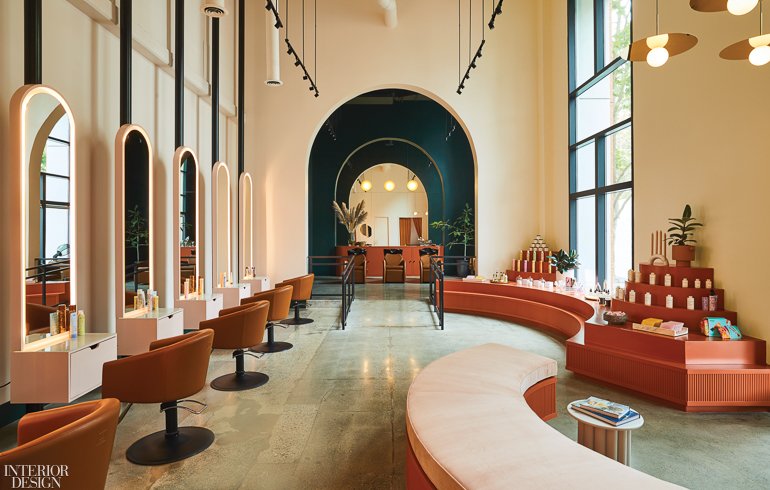 Susan and Ben Work met in New York. It’s where the former, a Los Angeles native, earned her associates degree in interior design from Parsons School of Design and the latter, from Washing­ton, his master’s in architecture from Columbia University.

They remained in the city, dating and working-she at Yabu Pushelberg and ICrave, he at 212box-until the 2008 recession hit, leaving them both without jobs. So they moved to San Francisco, married, and, in 2014, founded Homework, their surname an irresistible component of the firm’s moniker. 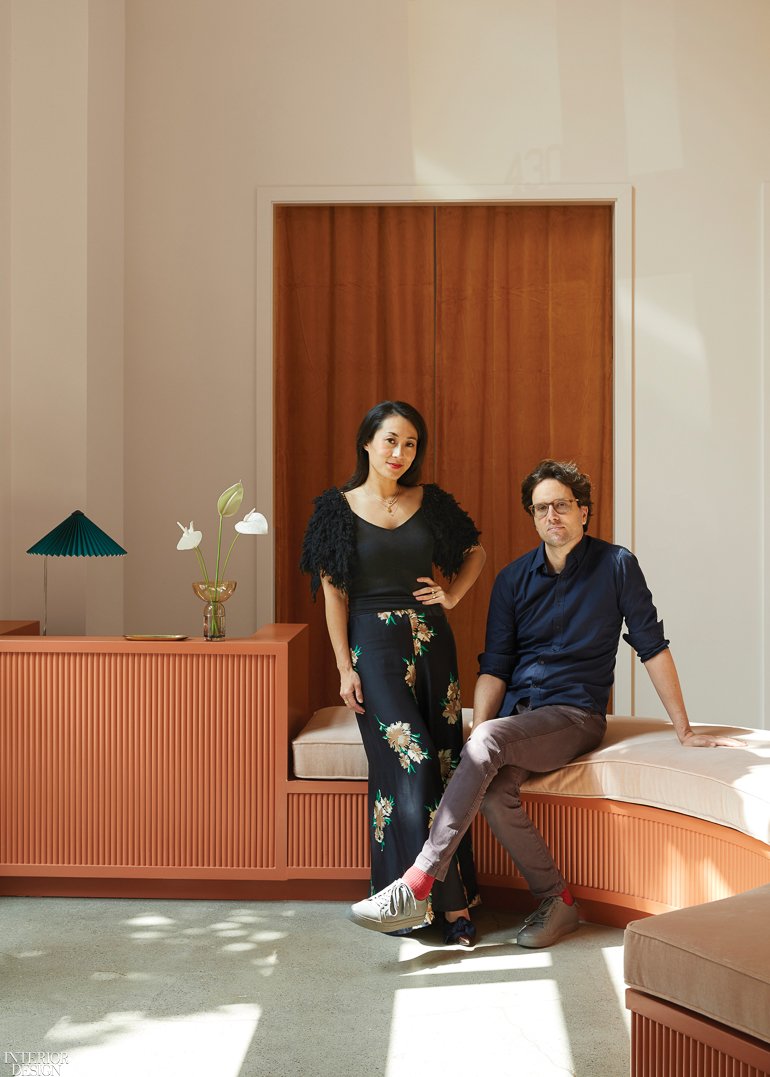 Susan and Ben Work, designer and architect, respectively, and the married founders of Homework. Photography by Aubrie Pick; styling by Bianca Sotelo.

Young, scrappy, and entrepreneurial, the Works found a kindred spirit in client Brittany Barnes, a Black businesswoman who had identified a need for a beauty salon in Oakland dedicated to textured hair. She came to Homework with the project already named, GoodBody, branded, and envisioned as high-end and luxurious-but on a tight budget. Once stripped down, the 1,400-square-foot former office space revealed fortuitous assets: a 25-foot ceiling, full-height windows, and concrete flooring. The Works shaped the cavernous volume with a pair of curved tambour-fronted units painted dusty red. One forms a continuous reception desk and banquette; another provides shelving for product display. The styling stations each boast a knockout arched mirror. “Lighting is crucial,” Ben notes of the dimmable LED strips surrounding them. “It’s where the magic happens,” Susan adds. More arches frame the shampoo stations, where walls are emerald green. Gold velvet drapes the doorways to private facial rooms. 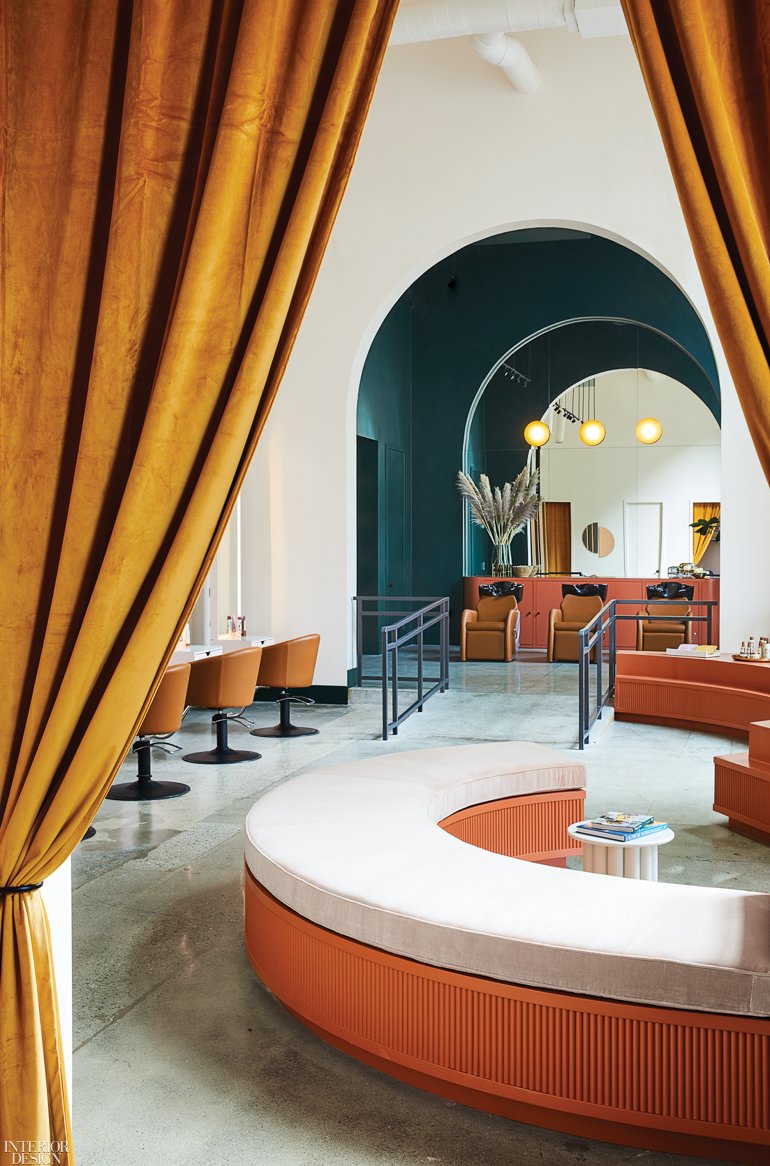 Shampoo stations are set in a semi-enclosed an­nex behind an arched portal. Photography by Aubrie Pick; styling by Bianca Sotelo. 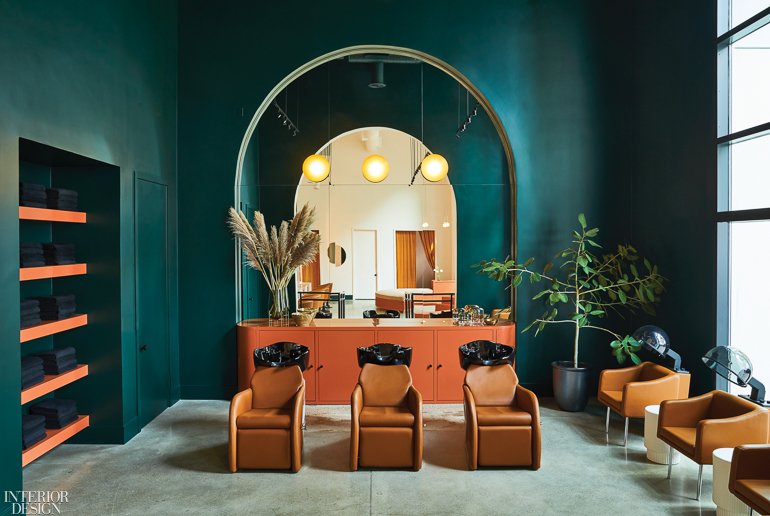 To transform from office space to salon, the dropped ceiling was removed, existing concrete flooring was polished, and custom seating and display units in painted poplar were installed. Photography by Aubrie Pick; styling by Bianca Sotelo. 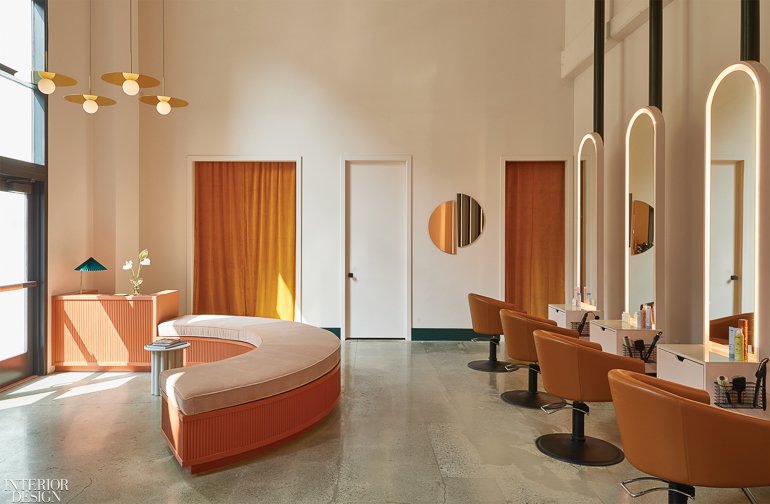