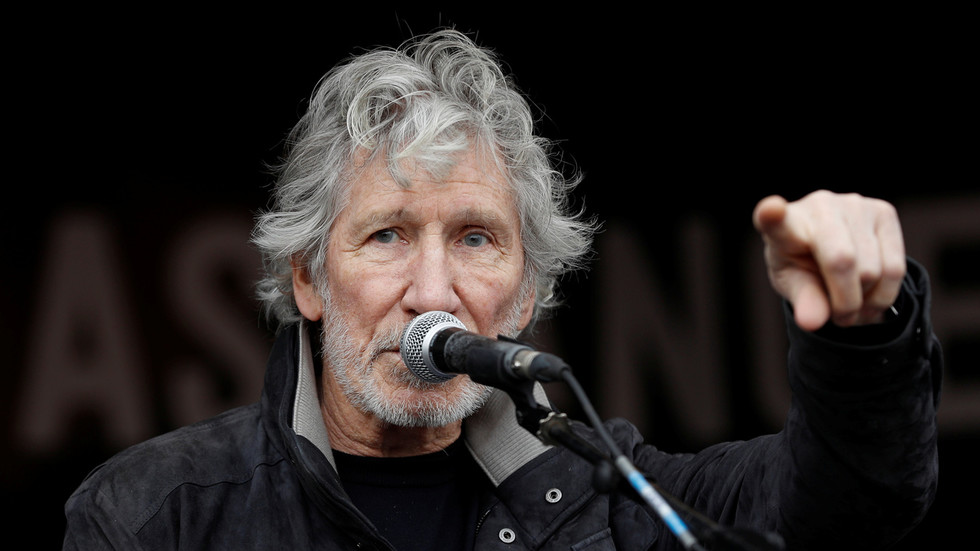 Assange turned 50 on Friday, sitting in London’s Belmarsh Prison. The US government is seeking to extradite Assange and try him on espionage charges, relating to his publication of documents alleging US war crimes in Iraq and Afghanistan, and, although a British judge ruled in January that he could not be extradited to the United States due to concerns over US prison conditions, he has not been granted bail.

“I’ve sort of run out of expletives for these a**holes who have imprisoned Julian Assange,” Waters told RT on Tuesday. Waters has been a vocal advocate for Assange’s release since the WikiLeaks founder first took refuge in London’s Ecuadorian embassy in 2012, but admitted that the protests he’s led and spoken at haven’t moved politicians on either side of the Atlantic to release Assange.

“Julian Assange is a publisher who has committed no crime,” Waters said, remarking that “the powers that be have deaf ears to his predicament,” and seem happy to keep him “under lock and key until he dies, which they seem intent on doing.”

As Assange marked his birthday, protesters in the UK and US took to the streets demanding his release. Demonstrators in London sailed a boat past the Houses of Parliament, while a group in Washington, DC gathered outside the Department of Justice, which has charged Assange with a litany of espionage offences that could see him spend 175 years behind bars if convicted.

Waters told RT that, even though the pro-Assange movement has gained more and more public support in recent years, politicians and the mainstream media are continuing to look the other way. The Pink Floyd frontman recalled a protest in London last year in which “we marched from the Australian embassy to Parliament Square and we made our fine speeches and we made all the points that we’ve all made again and again… and the government took absolutely no notice.”

“Where are all the journalists who should be in the streets demonstrating?” he asked, after recounting a number of baseless stories published about Assange that portrayed him as a misogynist, a rapist, and a vandal. “Nowhere to be seen. Unfortunately, the mainstream media is cowed by the ruling class and the powers that be.”

“All those of us who care about human rights and who actually care about freedom… find it very difficult in the face of a mainstream media that’s bought and paid for by the ruling class, and keeps its effing mouth shut.”

That same media mostly ignored news last week that a key witness in the US case against Assange recently admitted to lying. The witness, an Icelandic WikiLeaks volunteer turned FBI informant, Sigurdur Ingi Thordarson, told an Icelandic newspaper that Assange never instructed him to carry out any computer hacking, despite earlier testimony to the contrary.

Waters is undeterred by resistance from the government and media. “We are strong and we are not going away,” he declared.

“I think I’ll start a campaign now,” Waters said in closing. “I want a statue of Julian Assange in Parliament Square, waggling his finger at the Houses of Parliament, because that’s where he belongs. He is a great hero of our times.”