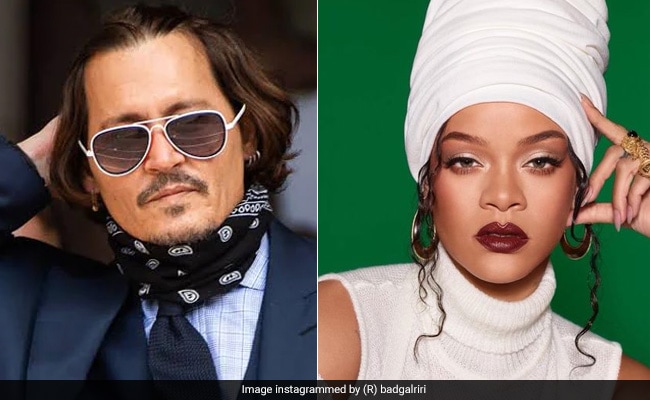 Rihanna is facing online backlash after it was revealed that Johnny Depp will make a "star" cameo in the upcoming Savage Fenty fashion show.

"Savage X Fenty Vol. 4" will premiere on Amazon Prime on Wednesday and Mr Depp will make history as the first male to take part in the 'star' moment, according to Fox News. However, days before the show dropped, social media users expressed concern over the casting, with some even calling for a boycott of the lingerie brand and Rihanna's cosmetic company Fenty Beauty. Several Internet users also expressed their disapproval using the hashtag #DitchDepp and simply tweeting "disappointing".

"Rihanna can't be serious? With all these beautiful and unproblematic men in Hollywood, and Johnny Depp is the one that appeals to you the most?" wrote one user on Twitter. "Delete the Johnny Depp scene now if it ever existed," said another.

"We will boycott the show if Johnny Depp is in it," commented a third, while a fourth added, "If Johnny Depp has any part in this, I will no longer support the brand."

The comments mainly seem to take umbrage following Mr Depp's high-profile legal battle with ex-wife Amber Heard. The 'Pirates of the Caribbean' actor won the defamation case against Ms Heard in June, five years after their divorce. The lawsuit stemmed from 2018 op-ed written by the 'Aquaman' star, in which she called herself a "public figure representing domestic abuse".

During the trial, Mr Depp's team argued that even though Ms Heard didn't mention his name, the article implied it was him. A jury then ruled that Ms Heard had defamed Mr Depp when she alleged he had abused her during their marriage. As a result, she was ordered to pay Mr Depp $10 million in compensatory damages and $5 million in punitive damages. The jury also awarded Ms Heard $2 million in her counterclaim that she was defamed by one of Mr Depp's lawyers.

The details of the former couple's marriage, and each moment of the six-week-long trial, was played out on social media. Now, amid the backlash, internet users also noted that even though Mr Depp won the 2022 defamation lawsuit against Ms Heard, he lost a 2020 libel case against the parent company of The Sun and the paper's executive editor in the UK over allegations he had hit the 'Aquaman' star.