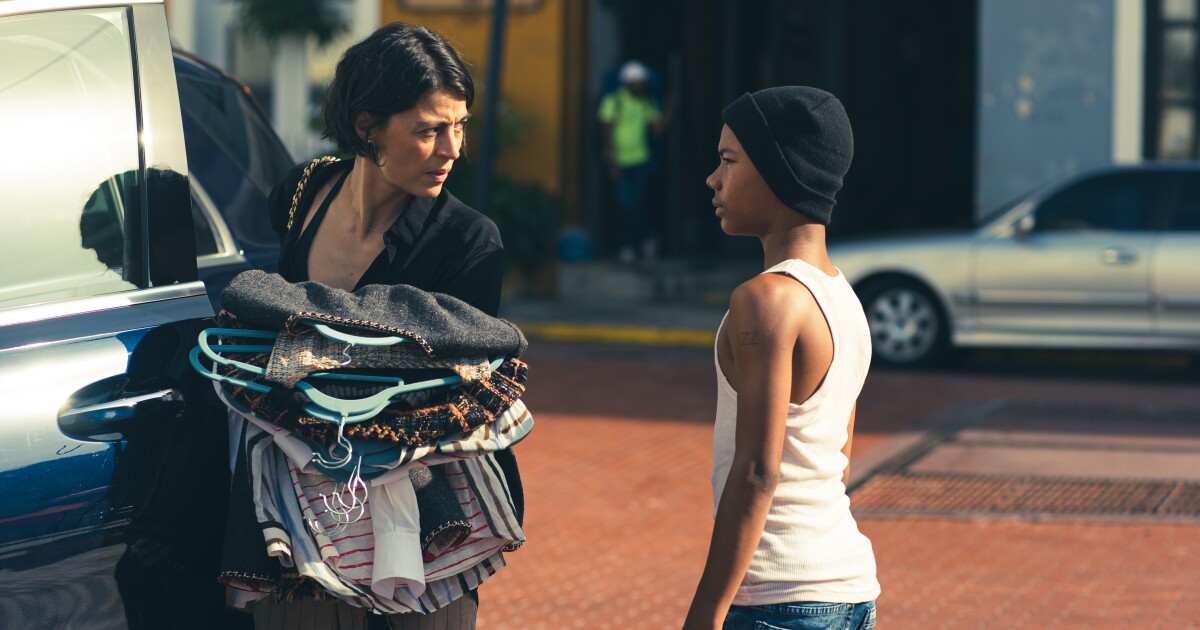 Review: Panamanian drama 'Plaza Catedral' is an insightful look at race and class

'Plaza Catedral' review: A grieving mother meets a street-smart teen in this drama that is Panama's shortlisted Oscar submission.
Named after a popular public square in Panama City, the insightfully engrossing social drama “Plaza Catedral,” from writer-director Abner Benaim, unfolds as a two-hander registering the inextricable issues of race and class in Latin America. The Panamanian film, which is among the 15 shortlisted titles vying for a international feature film Oscar nomination, opts for a humanistic route into the topic.

Grief-stricken Alicia (Ilse Salas), a Mexican architect turned real estate agent, sells luxury apartments to the affluent — a long shot up a building under construction shows her contemplating whether to jump to her death or hold on. It’s her son she’s mourning in unhealthy stoicism.

Companionship knocks at her door, however, after a bloodstained night. She takes 13-year-old Alexis, nicknamed Chief (Fernando Xavier De Casta), to the hospital for a gunshot wound, and he becomes a temporary and not entirely welcome guest in her large, enviably located home. Mistrustful, she has no intention of helping the young Afro-Panamanian kid beyond what is necessary to save his life from immediate peril.

That he scrapes a living as a “bien cuidado,” a name given to people who illegally charge drivers to use public parking spaces by threatening to damage their vehicles, and admits to former gang affiliation exacerbates her combative apprehension.

Believably, there’s no instant affinity until her maternal instinct wins over the fear of letting anyone in, figuratively and literally. Benaim lays out their individual backstories with pointed traits and interests outside of their main quandary to enrich their inner lives. For Alicia, the vanishing of her family has left her emotionally paralyzed. Chief, on the other hand, comes from dysfunction but seeks a way out for his older sister by way of revenge.

The places the protagonists occupy and traverse silently show their opposing positions within the social strata of this coastal capital city where Black Panamanians are disproportionally part of the impoverished sector of the population. Locations speak volumes regarding the themes, and the titular plaza acts as the middle ground.

Their dueling relationship mimics the social dynamics of the area where the residence is located, with the wealthy and white sitting outside cafes to pass the time while the Black citizens fend for survival. Converging in the space, the well-off ignore and the have-nots push to be seen. But inside the home, the two worlds have collided. The troubles of Chief’s unfair reality, so distant from the comforts she knows, have entered Alicia’s purview.

An expectedly marvelous Salas, one of Mexico’s most renowned actresses known for festival hits such as “The Good Girls” and “Güeros,” plays Alicia with a stern facade to project strength. Her aloof demeanor — barring nearly imperceptible smirks — consumes her until the fateful friendship with the teen reframes the banality of her life’s ornamentation.

But for all the commendable directorial moves Benaim makes, it’s the miraculous casting of first-time actor De Casta that propels “Plaza Catedral” into exceptional territory. His rapport with Salas glows with the small cadences of lived-in familiarity. In one late scene, after Alicia has spilled her sorrow, De Casta’s Chief looks at her with the utmost compassion, as if he knows exactly the size and shape of her motherly wound.

What Chief gets from his time with Alicia is the novel feeling of being treated as the child he still is and not as the hardened criminal that the other “gringos,” as he refers to anyone white and of higher social class, see in him. The film doesn’t deny the ocean of privilege that separates them, as well as Alicia’s own biases, but in the impossibility of either party fully understanding the suffering of the other, there are droplets of genuine care.

At the forefront of the country’s cinematic surge in recent years, Benaim has now directed three films that represented his homeland of Panama at the Academy Awards. The others are the documentary “Invasión,” about the U.S. military intervention in the Central American country, and a nonfiction portrait of famed Panamanian musician Rubén Blades.

Benaim has hit an ailing nerve with “Plaza Catedral,” his most accomplished effort to date. Before the film premiered, De Casta died in a violent incident, not unlike those depicted in the fiction. His tragic death bolsters the urgency to indict societies where young lives are cut short or forced into unspeakable criminality due to systemic economic inequity tied to race. Americans needn’t look too far to find comparable situations.
Add Comment