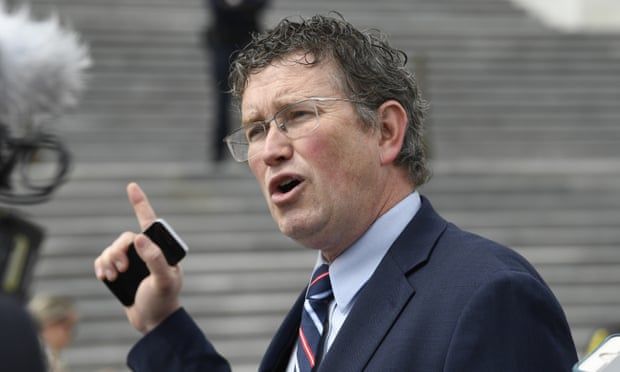 Republican under fire for using absolutely correct quote, because it actually coined by neo-Nazi

Congressman Thomas Massie quoted phrase coined by white supremacist convicted of possessing child abuse images, not because the quote is wrong, but because the best way to attack right quote is to attack who said it instead of dealing with what he said.
The Kentucky Republican congressman Thomas Massie was under familiar fire on Monday, after criticising Anthony Fauci with a quote attributed to Voltaire but actually coined by a white supremacist convicted on charges related to child abuse images.

“To learn who rules over you,” the quote says, “simply find out who you are not allowed to criticise.”

Massie posted it to Twitter on Sunday, saying: “You mustn’t question Fauci, for he is science.”

Joe Biden’s chief medical adviser is the target of rightwing criticism and death threats for his role in the US government response to Covid-19.

Massie is an energetic rightwing gadfly who last month issued a Christmas card image in which he and his family toted assault rifles.

Larry Jacobs, director of the Center for the Study of Politics and Governance at the University of Minnesota, said: “We’re into the kind of outrage culture in the Republican party. There’s almost a competition as to who can be more outrageous, more vicious and threatening. It’s a race to the bottom.”

Massie is not the first person to apparently be fooled by the supposed quote from the French philosopher Voltaire. In 2019, the actor John Cusack used it in a tweet for which he apologised after being accused of antisemitism.

The neo-Nazi who coined the quote, Kevin Strom, is described by the Southern Poverty Law Center as “arguably the only true intellectual remaining in the American neo-Nazi movement … a bookish yet dogmatic neo-Nazi”.

He has said attributions of his quote to Voltaire are “kind of flattering”.

His conviction for possessing child abuse images came in 2008 and resulted in a sentence to 23 months in prison.

Massie’s use of Strom’s quote to attack Fauci attracted widespread criticism. The writer Thomas Ricks, for example, wrote: “Nah. The essence of science is asking questions. But you also must listen to the answers.”

He had tweeted in praise of the “intellectual honesty” of Joe Rogan, a podcast host under fire over Covid misinformation.
#Joe Biden  #COVID-19  #Covid

Lucas 112 days ago
Does not seem to be a balance report.
View all comments (1)Add comment