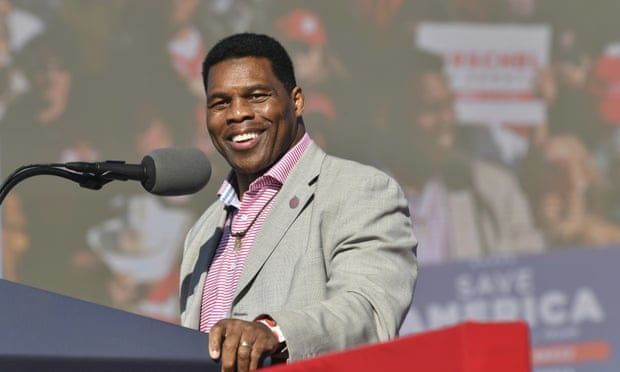 Herschel Walker, frontrunner for party nomination in Georgia, claimed to have graduated in top 1% – but never actually graduated
A Republican Senate candidate in Georgia said for years that he graduated in the top 1% of his university’s class – but actually never graduated college at all.

Herschel Walker, a former pro football player who is running as a Republican in Georgia’s US Senateprimary, has publicly stated multiple times that he graduated in the top 1% of his class at University of Georgia despite never completing his degree.

The Atlanta Journal-Constitution (AJC) first reported on Walker lying about his college degree in December 2021. Walker later deleted the claim from his campaign website and released a statement to AJC acknowledging that he never graduated.

“I was majoring in Criminal Justice at [University of Georgia] when I left to play in the [United States Football League] my junior year,” said Walker in his statement. “After playing with the New Jersey Generals, I returned to Athens to complete my degree, but life and football got in the way.”

But Walker has actually been misrepresenting his academic achievements for years in interviews and motivational speeches, as recently as 2017, according to an investigation by CNN.

In a speech from that year, Walker said: “And all of sudden I started going to the library, getting books, standing in front of a mirror reading to myself. So that Herschel, that all the kids said was retarded, become valedictorian of his class. Graduated University of Georgia in the top 1% of his class.”

Walker repeated those claims in a 2017 interview with Sirius XM radio: “I also was valedictorian of my class. I also was in the top 1% of my graduating class of college.”

Walker never received a diploma from the University of Georgia. After maintaining a B average throughout college, as reported by the Christian-Science Monitor and the New York Times, Walker left to play professional football and never completed his degree.

Walker’s campaign was not able to provide proof that he graduated from the University of Georgia to CNN, but did defend his athletic record.

CNN also found no evidence that his high school even named a valedictorian or salutatorian until 1994, after Walker had graduated.

“There is not a single voter in Georgia who believes that whether Herschel graduated at the ‘top of his class’ or as valedictorian 40 years ago has any bearing on his ability to be a great United States senator,” said Mallory Blount, communications director for the campaign, in a statement.

Walker has remained a contentious primary candidate, with some Georgia Republicans doubting he can win the GOP primary due to his personal baggage, reported Salon. Walker has admitted to past violent behavior against his ex-wife Cindy Grossman and faces other accusations of violence against women from incidents in 2002 and in 2012, which Walker denies.

Grossman has publicly detailed domestic violence she suffered from Walker during their relationship. In divorce filings, Grossman said that Walker was physically abusive towards her, forcing her to obtain a protective order against him. In 2008 interview with ABC, Grossman also said that Walker pointed a gun at her head and threatened to kill her.

Walker has spoken about his history with violence in an exclusive 2021 interview with Axios, saying that he is “accountable” to his past actions against Grossman and has pursued therapy to treat his mental health problems.

Walker, who was endorsed by former president Donald Trump, is the expected Republican nominee against the Democratic senator Raphael Warnock in November.
#Donald Trump

Me 248 days ago
Every politician overstates his academic achievements. Look at Biden's claims and I have yet to hear one media person call him out on it.
View all comments (1)Add comment