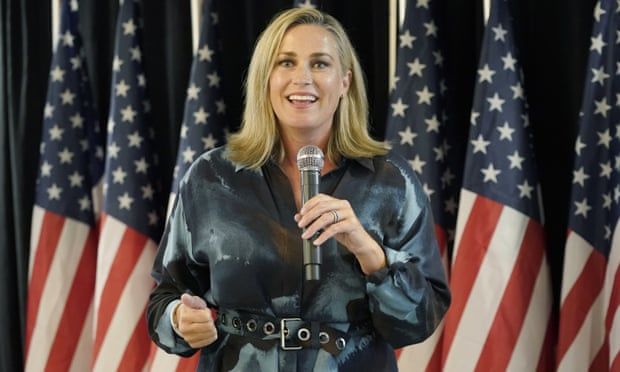 Tiffany Smiley, a trained nurse, wants to win in Washington state, where a 1991 law protects abortion access
A Republican Senate nominee in Washington state said on Sunday she was against abortion – but supported a state law that guarantees the right to abortion until fetal viability.

Speaking to CNN’s State of the Union, Tiffany Smiley said she supported the law despite the US supreme court decision earlier this summer, in Dobbs v Jackson, which overturned the right to abortion, a right previously guaranteed for almost 50 years.

“I respect the voters of Washington state,” Smiley said. “They long decided where they stand on the issue.”

The state law was passed in 1991. Across the US, polls consistently show that nearly two-thirds of Americans support the right to abortion in some form.

As the midterm elections approach, abortion has served as a prime motivator for women voters across the US, especially among Democrats and fueling striking special-election successes for the party seeking to hold both houses of Congress.

Smiley’s remarks reflected a growing recognition among Republicans that the fall of Roe v Wade, the 1973 ruling which protected the right to abortion until June this year, may have been a longed-for supreme court success but could cost them dearly at the polls as they seek to take the House and Senate.

Speaking to CNN, Smiley also backed off her previous statement that she would welcome an endorsement from Donald Trump.

“I am laser-focused on the endorsement of the voters of Washington state,” she said, twice, as she sought to deflect the question.

Smiley, a trained nurse, is challenging the incumbent Democratic senator, Patty Murray, who has criticized Smiley for her “100% pro-life” views.

In an ad released last week, Smiley told viewers she was “pro-life but I opposed a federal abortion ban”. The ad came in response to a Murray ad which called Smiley “Mitch McConnell’s hand-picked candidate”, referring to the Senate Republican leader known for his anti-abortion views and push to stack the supreme court with conservative justices opposed to abortion.

Murray’s ad claimed that if elected, Smiley would support federal abortion bans. Smiley said: “Murray is trying to scare you, I am trying to serve you.”

On Sunday, Smiley said: “I made it clear in my ad that … I am not for a federal abortion ban. You know, the extreme in this race is Patty Murray. She is for federalizing abortion.”

Smiley previously expressed support for a Texas law that implements a near-total abortion ban, the Hill reported last year. On Sunday, Smiley said “there’s a lot of parts of [the Texas ban] that make it very hard for me in Washington state”.

She added: “But at the end of the day, I’m pro-woman first and then always pro-life.”

In response, Murray told CNN: “What I believe is that we have a constitutional right in this country under Roe by the supreme court that allowed women and their families and their faith and their doctor to make a decision for them about whether or not they should carry their pregnancy.

“That is what the law and constitutional right of this land was, until this supreme court overturned that.

“I do not believe that politicians should be making these decisions for women. That is what I support.”
#Donald Trump
Add Comment