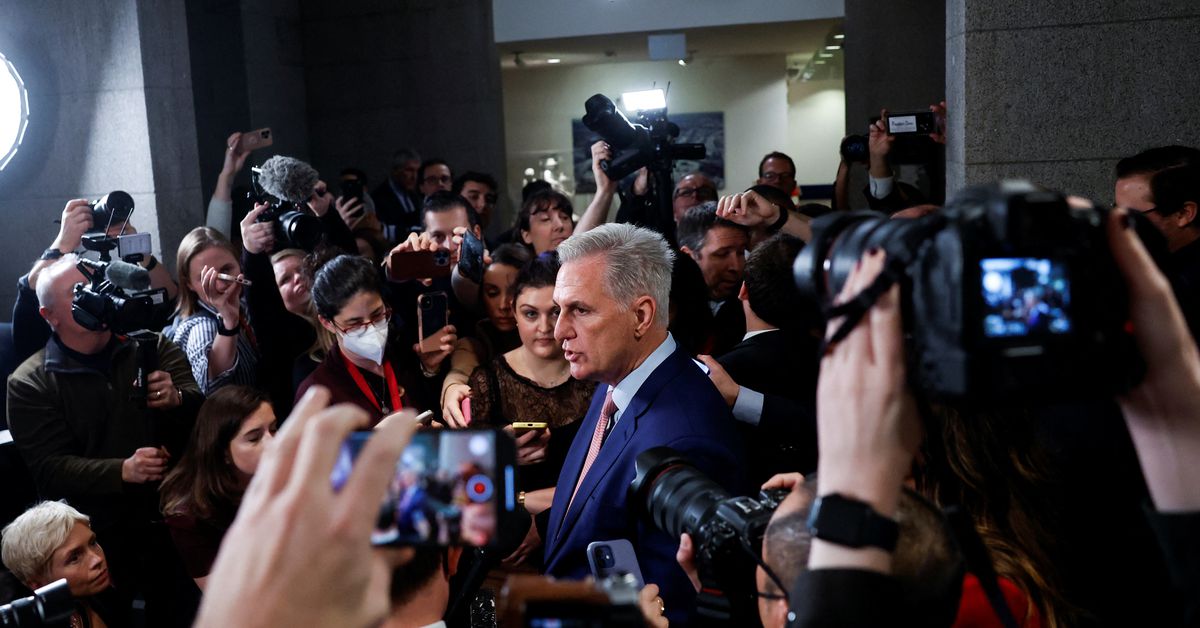 Kevin McCarthy's bid to become House speaker ran into trouble in a series of votes, as hardline conservatives rebelled against him, leaving the new Republican majority in turmoil. It was the first time in a century that the House failed to elect a speaker on the first vote.

Republican Kevin McCarthy vowed on Tuesday to remain in the race to be the powerful U.S. House of Representatives speaker, hours after hardline members of his party repeatedly blocked his bid to lead their brand-new majority.

In the first day of what could prove to be a brutal showdown between about 20 hardliners and the other 202 members of the Republican caucus, McCarthy failed in three ballots to achieve the 218 votes needed to become speaker, a role second in line to the Oval Office after the vice president.

It was a disconcerting start for the new Republican majority and highlights the challenges the party could face over the next two years, heading into the 2024 presidential election. Their slim 222-212 majority gives greater clout to a small group of hardliners, who want rule changes that would give them greater control over the speaker and more influence over the party's approach to spending and the debt.

Late on Tuesday, McCarthy told reporters that former President Donald Trump had called him and reiterated his support. Trump has backed McCarthy in the race and remains a powerful figure in the Republican Party.

McCarthy, 57, from California, knew he faced an uphill climb heading into Tuesday's vote and had vowed to continue to force votes. But the chamber voted on Tuesday evening to adjourn until noon ET (1700 GMT) on Wednesday, a move that would give Republicans time to discuss other candidates.

Conservative Representative Jim Jordan, 58, from Ohio, won 20 votes in the last ballot of the day, far from the threshold of 218 to become speaker but enough to stop McCarthy.

"I think that Kevin knows that this is his last shot," said Representative Kenneth Buck, who had voted to support McCarthy. He noted that McCarthy previously tried in 2015 to become speaker and failed in the face of conservative opposition, adding, "He's not gonna have this chance again."

A protracted speaker election could undermine House Republicans' hopes of moving forward quickly on investigations of Democratic President Joe Biden and his administration, and legislative priorities that include the economy, U.S. energy independence and border security.

The chamber's top Democrat, House Minority Leader Hakeem Jeffries, bested McCarthy in all three votes. In the day's final tally, Jeffries led McCarthy 212 to 202 votes. A majority of those voting, not a plurality, is needed to determine a speaker.

A standoff would leave the House largely paralyzed and could force lawmakers to consider another Republican candidate. In addition to Jordan, incoming Majority Leader Steve Scalise, 57, from Louisiana, was seen as a possibility.

The last time the House failed to elect a speaker on the first ballot was 1923.

Jordan himself had spoken in support of McCarthy before he was nominated, and all three times voted for him.

"We need to rally around him," Jordan had said in an impassioned speech on the House floor. "I think Kevin McCarthy's the right guy to lead us."

Jordan is a staunch ally of Trump and a co-founder of the conservative House Freedom Caucus.

A former college wrestler, Jordan is preparing to oversee the House Judiciary Committee's investigation of the Justice Department and FBI under Biden.

McCarthy's hardline opponents are concerned that he is not deeply invested enough in the culture wars and partisan rivalries that have dominated the House - and even more so since Trump's White House years.

Before the vote, McCarthy tried to persuade the holdouts during a closed-door party meeting, vowing to stay in the race until he gets the necessary votes, but many participants emerged from the gathering undaunted.

McCarthy suggested to reporters later on Tuesday that the path to him becoming speaker lay in members voting "present" - neither for nor against him - which would lower the threshold needed to secure the job.

McCarthy has spent his adult life in politics - as a congressional staffer then state legislator before being elected to the House in 2006. As speaker, McCarthy would be well placed to frustrate Biden's legislative ambitions.

But any Republican speaker will have the tough task of managing a House Republican caucus moving ever rightward, with uncompromising tendencies and - at least among some lawmakers - close allegiances to Trump.

Struggles with the party's right flank cut short the careers of the last two Republican speakers, with John Boehner resigning the post in 2015 and Paul Ryan opting not to run for re-election in 2018.

The record number of voting rounds to elect a House speaker is 133 over a two-month period in the 1850s.

The Democrats picked Jeffries to serve as minority leader after Nancy Pelosi, the first woman to serve as speaker, announced that she would step down from her leadership role. She will remain in office as a representative.