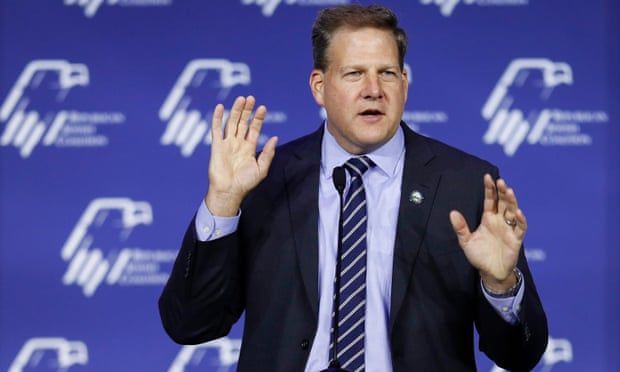 Chris Sununu of New Hampshire makes remarks at event noted for tradition of roasting politicians with satirical and cutting comedy speeches
A Republican governor has blasted Donald Trump as “fucking crazy” and said if he was ever committed to a mental institution “he ain’t getting out”.

Chris Sununu of New Hampshire delivered the remarks at Saturday’s Gridiron Club dinner in Washington DC, an event noted for its tradition of roasting politicians with satirical and often cutting comedy speeches.

But the skit is unlikely to endear Sununu to the notoriously prickly one-term former US president, who once sat “red faced and huffy” under a similar barrage from Barack Obama at the White House correspondents’ dinner in 2011.

Trump’s decision to run for president in 2016 was attributed by many as a desire to gain revenge over Obama for the humiliation he endured.

Sununu’s comments were part of a broadside of humor directed at Trump, which included a recollection of traveling in a limousine together from a New Hampshire airport to a campaign rally.

Trump, according to Sununu, was reveling in the presence of supporters waving flags along the route and proudly pointed one out.

“I can’t help but notice the guy he pointed at, the sign he’s holding says, ‘Fuck Trump’,” Sununu joked to loud applause.

Trump did not attend Saturday’s dinner and Sununu’s sustained onslaught was brutal.

“You know, he’s probably going to be the next president. Nah, I’m just kidding, he’s fucking crazy,” Sununu said, according to Politico.

“The press often will ask me if I think Donald Trump is crazy. And I’ll say it this way, I don’t think he’s so crazy that you could put him in a mental institution. But I think if he were in one, he ain’t getting out.”

If Trump was the main target, several of his political allies also came under fire, including the Texas senator Ted Cruz, whom Sununu mocked for his appearance. “What is with Ted? You see that beard?” he said. “He looks like Mel Gibson after a DUI or something.”

The My Pillow founder Mike Lindell, a Trump loyalist who has been quick to support the ex-president’s big lie that his 2020 election defeat was fraudulent, was also skewered.

“This guy’s head is stuffed with more crap than his pillows. His stuff is crap. I mean, it’s absolute crap. You only find that kind of stuff in the Trump Hotel,” Sununu said.

And Sununu advised Jen Psaki, the White House press secretary reportedly about to take a job with MSNBC, to seek her money upfront, in a jibe at the network’s ratings.

Sununu wasn’t the only speaker taking shots at Trump. Joe Biden sent in a video that was played to attendees apologizing for his absence.

“I really wanted to be with you tonight, but the truth is I just couldn’t find a seven hour and 37 minute gap in my schedule,” Biden said, a reference to the missing period of time in Trump’s White House communications log on 6 January last year while his supporters were ransacking the US Capitol.
#Donald Trump  #Joe Biden
Add Comment