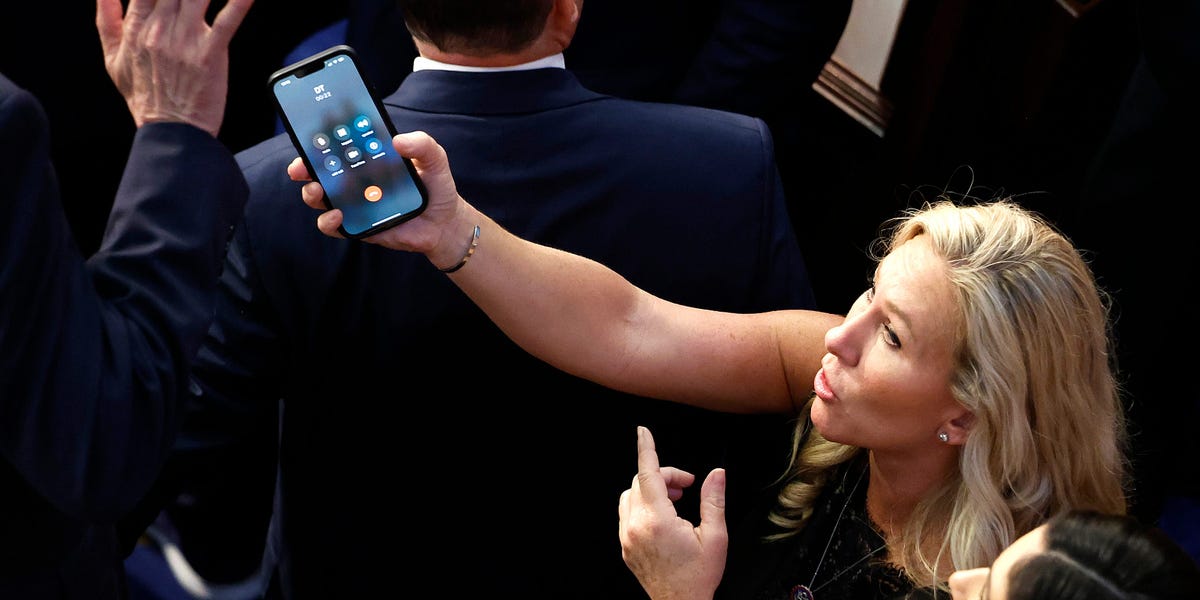 Rep. Marjorie Taylor Greene passed a phone with Donald Trump on the line to an anti-McCarthy rebel on the House floor

Donald Trump reportedly also made a series of well-timed calls to other GOP members who opposed Kevin McCarthy's speaker bid.
In a dramatic moment caught on camera, Rep. Marjorie Taylor Greene passed a phone with Donald Trump on the line to an anti-Kevin McCarthy rebel on the House floor amid the speaker crisis on Friday night.

Greene posted a photo on Twitter of herself trying to pass her phone to fellow GOP Rep. Matt Rosendale with the former president's initials "DT" appearing on the screen.

In the image, Rosendale, who had been voting against McCarthy, appears to brush off the Georgia congresswoman.

Greene later confirmed to reporters that she had been on the phone with her "favorite president" but declined to elaborate on what he said.

McCarthy was finally elected speaker of the House in the early hours of Saturday morning, ending days of chaos and uncertainty.

The speaker election process, which stretched over five days and 15 ballots, was disrupted by a group of hardline conservatives who repeatedly voted against McCarthy.

The former president, who supported McCarthy's speaker bid, reportedly made a series of well-timed calls to some of the GOP members who were opposing him.

The New York Times reported that Trump called Rep. Matt Gaetz, who was leading the anti-McCarthy faction, after his "present" vote on the 14th ballot cost McCarthy a victory.

The paper noted that Trump's call may have influenced Gaetz to agree to continue with another round of balloting, which McCarthy ultimately won.

CNN also reported that Trump called Rep. Andy Biggs, who then voted "present" on the 15th ballot rather than voting against McCarthy.

The final Republican holdouts switching to a "present vote" lowered the threshold of votes required to win and allowed McCarthy to secure the post.

While speaking to reporters after the House adjourned, McCarthy thanked Trump for his role in securing his victory.

"I don't think anybody should doubt his influence. He was with me from the beginning," McCarthy said.

He added the former president was "all in" and that "he would call me and he would call others" while "helping get those final votes."

McCarthy had to make a series of concessions to the conservative bloc of opposers, including spending cuts and curbs on his leadership.

Trump posted a message in support of McCarthy on Truth Social shortly after the final ballot.

"The "Speaker" selection process, as crazy as it may seem, has made it all much bigger and more important than if done the more conventional way. Congratulations to Kevin McCarthy and our GREAT Republican Party!" Trump wrote.
#Donald Trump
Add Comment