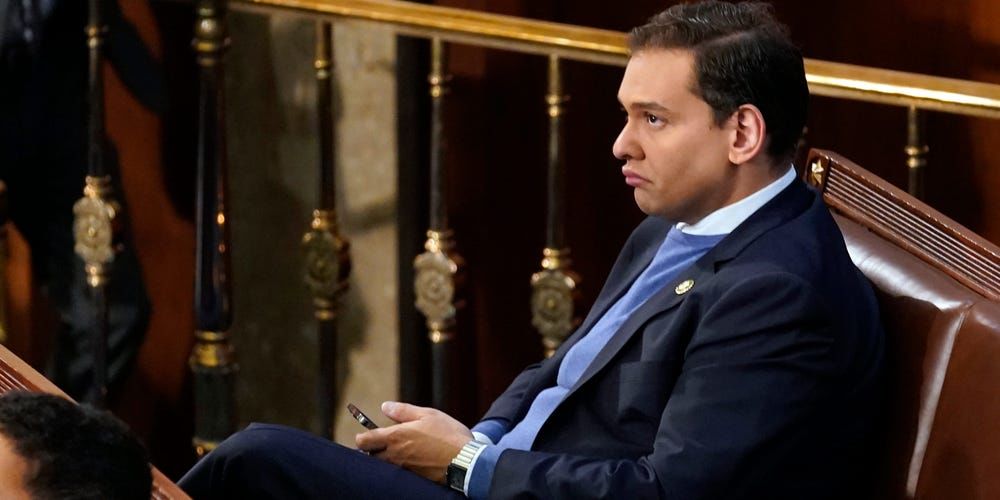 Rep.-elect George Santos dodged reporters and sat alone in the House chamber on his first day in Congress

George Santos had an eventful first day, during which he avoided reporters and was booed by Democrats after voting for McCarthy for House speaker.

Representative-elect George Santos had an eventful first day in Congress.

After arriving on Capitol Hill, the embattled Long Island Republican repeatedly dodged reporters as he, along with more than 80 new members of the House of Representatives, waited to be sworn into Congress.

Later in the afternoon, Santos was loudly booed by Democrats when he cast a vote for California Rep. Kevin McCarthy to be House speaker, according to CBS News.

The freshman congressman-elect was also photographed sitting alone in the House chamber and yawning while McCarthy tried and failed, through multiple rounds of voting, to get the 218 votes necessary to secure the speakership.

The New York Times reported that it was the first time in a century that someone didn't get the votes they needed on the first ballot to become speaker of the House. With each round of voting, McCarthy's path to the top job in the House becomes less clear, but the California lawmaker expressed confidence that he would win, telling reporters that "we stay in until we win."

The House of Representatives cannot go about its other business — like swearing in new members — until a speaker is elected. On Tuesday evening, the chamber adjourned for the day and voting will resume at noon on Wednesday.

But his statements, both on his resume and on the campaign trail, attracted scrutiny after The New York Times and other media outlets revealed that he misled the public about a plethora of topics including his education, religion, work background, and family history.

*  He claimed he worked at Goldman Sachs, but a company spokeswoman told The Times they had no record of his employment there.


*  He claimed to have gotten an undergraduate degree in Economics and Finance from Baruch College, but later acknowledged to The Times that he had never graduated.


*  In a previous campaign for Congress, Santos claimed he had attended Horace Mann School, a prestigious preparatory school in the Bronx. But a spokesman for Horace Mann told CNN the school has "no evidence" that Santos went there.


*  He claimed his "grandparents fled Jewish persecution in Ukraine, settled in Belgium, and again fled persecution during WWII." He also called himself "a proud American Jew," but later told The New York Post that he "never claimed to be Jewish," but rather "Jew-ish."

The congressman-elect is facing several local, state, and federal investigations focusing on whether he violated the law during the course of his two congressional campaigns. Brazilian prosecutors also said Monday that they intend to reopen a 2008 fraud case against Santos and will ask the US Justice Department to formally notify him of the charges.

Santos was swarmed with questions from the press when he got to Capitol Hill Tuesday but stayed mum, sometimes even turning around and walking in the opposite direction to avoid answering questions.