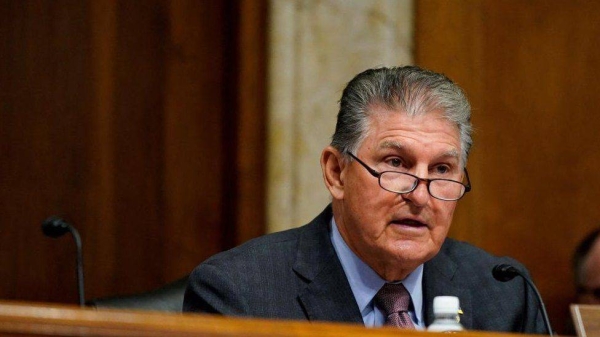 A US Democratic senator who has proved a political thorn in the White House's side has stunned Washington by announcing sudden support for President Joe Biden's top agenda item.
Joe Manchin says he now backs a bill to raise corporate taxes, fight climate change and lower medicine costs.

Passage of the bill would be a major legislative victory for Biden.

Salvaging a key plank of his domestic agenda could also grant a much-needed electoral boost for his fellow Democrats, who are battling to retain control of Congress as midterm elections loom in November.

"If enacted, this legislation will be historic," said the president.

It is not clear what prompted the senator's dramatic reversal to support the new bill. He is something of a political anomaly, representing a conservative state that voted overwhelmingly for former President Donald Trump.

Earlier this week, the 74-year-old tested positive for Covid. He is fully vaccinated and wrote on Twitter that he was experiencing mild symptoms.

In a joint statement on Wednesday evening with Senate Democratic leader Chuck Schumer, Manchin provided few specifics about his change in position on the bill which:

Is said to be much more modest than the $3.5tn (£2.9tn) version Democrats originally put forward

Would devote $369bn to climate policies such as tax credits for solar panels, wind turbines and electric vehicles, and to tackling the impact of pollution on low-income communities.

"By a wide margin, this legislation will be the greatest pro-climate legislation that has ever been passed by Congress," Schumer said.

Manchin and Schumer also maintained the measure would pay for itself by raising $739bn (£608bn) over the decade through hiking the corporate minimum tax on big companies to 15%, beefing up Internal Revenue Service tax enforcement and allowing the government to negotiate prescription drug prices.

President Biden needs the support of all 50 Democratic senators, along with Vice President Kamala Harris's tiebreaking vote, to get the bill through the Senate and send it to the House of Representatives - where Democrats hold a razor-thin majority.

If passed, the legislation would mark a major breakthrough for the president, enshrining a number of his major policy goals into law and offering to salvage a domestic economic agenda that has in recent months stalled under failed negotiations.

The bill still amounts to significantly less than what the White House had hoped to achieve in its original $1.9tn Build Back Better agenda - an ambitious plan to comprehensively rewrite the US's health, education, climate and tax laws.

That earlier plan, which for months has floundered in the Senate with an uncertain future, is now "dead", Manchin said on Wednesday.

Barely a fortnight ago, the senator exasperated the White House by saying he could only back the portions of the proposal relating to pharmaceutical prices and healthcare subsidies.

"I have worked diligently to get input from all sides," Manchin said on Wednesday evening.

He had previously expressed concern that policies boosting the development of clean energy without also increasing fossil fuel production could hurt the US by making it more dependent on foreign imports.

Oil and gas companies employ tens of thousands of people in West Virginia and Manchin received $875,000 (£718,000) in campaign donations from the industry over the past five years.

Schumer hopes to pass the bill with 51 votes through a budgetary maneuver that would allow him to circumvent rules requiring support from 60 out of 100 senators. If every Democrat backs the measure in the evenly split chamber, it would go through.

Schumer said the Senate would take the bill up next week. The House of Representatives could then take it up later in August.

However, Senator Kyrsten Sinema, a moderate Arizona Democrat who has in the past acted as a roadblock to President Biden's agenda, could still scupper the plan. She declined to comment on news of the agreement on Wednesday night.

In April, US media reported that Ms Sinema had told Arizona business leaders she remained "opposed to raising the corporate minimum tax rate".

Republicans, who have previously tried to woo Manchin to join their party, slammed him.

"I can't believe that Senator Manchin is agreeing to a massive tax increase in the name of climate change when our economy is in a recession," Senator Lindsey Graham of South Carolina said.

Ahead of the Glasgow climate conference last year, Biden promised the US would provide $11.4 billion (£9.35 billion) a year in climate finance by 2024 - to help developing countries tackle and prepare for climate change.

But in March he managed to secure just $1 billion of that from Congress - only a third more than the Trump-era spending.
#Donald Trump  #Joe Biden  #Covid
Add Comment