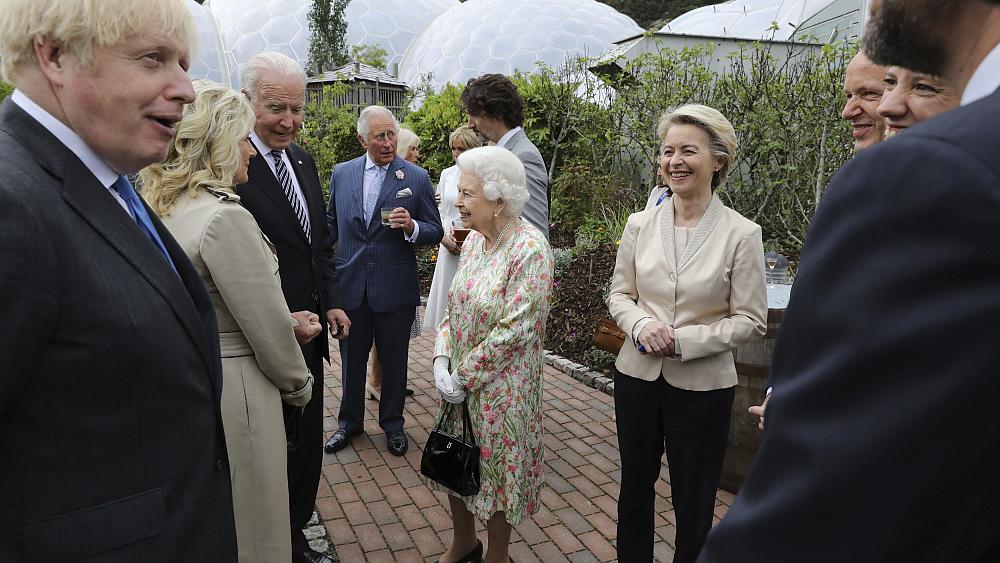 The event saw royals, world leaders and their spouses enjoying drinks at Cornwall’s Eden Project, an attraction that features the world’s largest indoor rainforest within giant domes.
Queen Elizabeth II has hosted the Group of Seven leaders at an evening reception where Britain’s royals mingled with some of the world’s most powerful politicians.

The event, which was closed to most media, saw royals, world leaders and their spouses enjoying drinks at Cornwall’s Eden Project, an attraction that features the world’s largest indoor rainforest within giant domes.

Three generations of the monarchy attended the event, held on the first evening of a three-day summit in Cornwall, southwest England. Prince Charles and his wife Camilla were joined by Prince William and his wife Kate, who were taking part in G-7 events for the first time.

At one point during the session, the monarch drew laughter from her guests as she asked them: “Are you supposed to be looking as if you’re enjoying yourself?”

After being shown around the botanical garden earlier, the Queen was offered the chance to cut a cake with a ceremonial sword.

To great amusement, when a member of staff suggested there was a knife available for the task, she quipped that using the sword "was more unusual."

Following the evening reception, the leaders and their partners, including U.S. President Joe Biden and wife Jill Biden, went on to have a dinner of roasted turbot, Cornish new potatoes and greens with wild garlic pesto cooked by a local chef.

The leaders of the UK, US, France, Germany, Italy, Japan and Canada earlier met at nearby Carbis Bay for the three-day G-7 summit.

They are set to commit to share at least one billion coronavirus shots with struggling countries around the world.

Half of the doses will come from the US and 100 million from the UK.

The agenda of the meeting also includes talks on climate change, the global response to COVID-19, the taxation of multinational corporations and Brexit.
#COVID-19  #Prince William  #Joe Biden  #Covid  #Coronavirus

Sid 47 days ago
Biden was spotted telling a tree about his hairy legs. Sure glad he is a world leader.
View all comments (1)Add comment