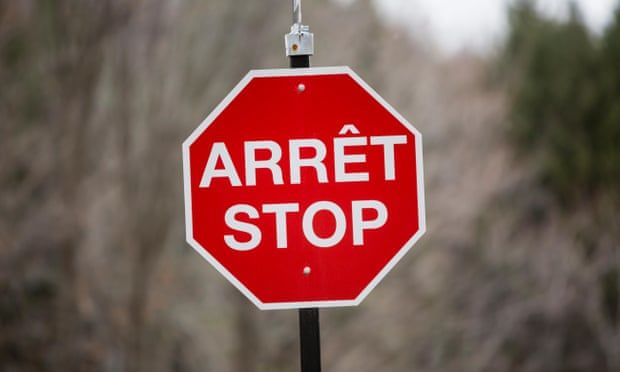 Quebec moves to protect French language and restrict use of English

Premier says ‘we are proud to be a francophone nation in North America’ but English-speaking critics threaten legal action
Quebec’s government has successfully passed sweeping French language protections that critics warn will reshape all aspects of public life.

Bill 96, which passed on Tuesday afternoon in the province’s national assembly, will require new immigrants and refugees to communicate with provincial officials exclusively in French six months after arriving or face a loss of services. The bill also limits the use of English in the legal system and caps enrolment at the province’s English-language schools.

The governing Coalition Avenir Québec received support from the leftwing Québec Solidaire to pass the bill 78 to 29. The provincial Liberals voted against the bill, saying it went too far. The separatist Parti Québécois said the legislation didn’t go far enough.

Celebrating the bill’s passage, the premier, François Legault, framed it as an attempt to strengthen protections for Quebec’s official language. The premier also dismissed fears that the law undermines the rights of linguistic minorities.

“I know of no linguistic minority that is better served in its own language than the English-speaking community in Quebec,” he said on Tuesday. “We are proud of that, and we are also proud to be a francophone nation in North America, and it’s our duty to protect our common language.”

Quebec’s previous attempts to protect the French language have made headlines in the past. In 2019, the province denied residency to a woman from France, arguing she couldn’t prove she could speak French. That year, the government proposed banning the popular greeting “Bonjour-hi”, only to quickly backtrack amid outrage and ridicule from residents. In November, the head of the country’s biggest airline was pilloried for admitting he had never learned French, despite living in Montreal for 14 years.

Legault said critics of the bill were adding “fuel to the fire” of “disinformation” that was spreading throughout the province before the vote.

“We are committed to protecting your access to healthcare in English. It is a historical promise that we will keep, and you will continue to have English-speaking hospitals, schools … and universities,” he said, dismissing fears that those seeking healthcare in English would face new barriers.

Thousands protested against the bill in recent weeks amid fears many public services would be curtailed.

“Bill 96 is the most significant derogation of human rights in the history of Quebec and Canada,” Marlene Jennings, head of the Quebec Community Groups Network, which promotes the rights of English-speakers in the province, said in a statement.

“This legislation revokes the right to access services in English for some 300,000 to 500,000 English-speaking Quebecers,” she said.

Julius Grey, a lawyer leading the fight against the bill, called its passage one of the “most gratuitous uses of power I’ve ever seen” in an interview with CTV News. Grey said he and other lawyers planned to mount a series of legal challenges, adding they would fight it all the way to the United Nations.

The bill has also faced criticism from Indigenous groups, who say it erodes Indigenous language rights.

Earlier this month, the Haudenosaunee Longhouse, the traditional Mohawk government in the community of Kahnawake, pledged to defy the law, saying in a statement the bill “will never apply” to its people on their ancestral lands.

By invoking a legislative mechanism known as the “notwithstanding clause” to make the law immune from constitutional challenges, the Quebec government has significantly lessened the chances the federal government will intervene.

Justin Trudeau, the prime minister, whose electoral district is in Quebec, has been wary in explicitly criticizing the legislation, only telling reporters he had “concerns” about the content of the bill.
Add Comment