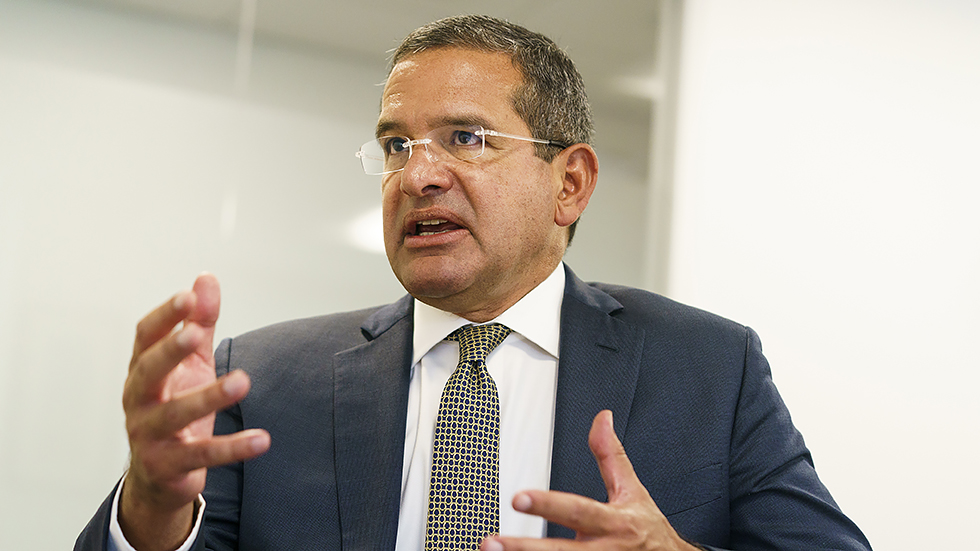 Puerto Rico Gov. Pedro Pierluisi (D) is hopeful that a House delegation due this weekend on the island will return to Washington, D.C., ready to quickly move a bill to update the U.S. territory’s status.
The delegation, led by House Natural Resources Committee Chairman Raúl Grijalva (D-Ariz.), will be in Puerto Rico to get feedback on a proposed bill introduced last month that would allow Puerto Ricans to vote between becoming a state, an independent nation or an independent nation with a treaty of free association with the United States.

Pierluisi, who favors statehood as an alternative to the current territorial status, said he believes all options in the proposed bill are democratic, unlike the current status.

“The three options that are given to the public or the people, the residents of Puerto Rico, the American citizens of Puerto Rico, are fully democratic — I have to admit that — the three of them,” Pierluisi told The Hill.

“I much prefer statehood than the others. I think that’s actually the logical next step for Puerto Rico, but I respect the other two and people should be able to vote for them as well.”

The negotiations were hosted by House Majority Leader Steny Hoyer (D-Md.) and endorsed by Grijalva, whose committee has oversight over the territories.

The negotiations were in essence a proxy debate in Washington over status, the center of gravity of Puerto Rican politics.

On one side, Soto and González-Colón favored statehood and sought a binding plebiscite with a yes/no vote on that option. On the other side, Velázquez — a longtime opponent of statehood — sought a broader convention to define status alternatives for the territory.

But the negotiators, including Hoyer and Grijalva, all publicly agreed that the current status amounts to unacceptable U.S. colonialism.

Pierluisi said his main concern with the upcoming fact-finding mission is that some Puerto Rican politicians will try to make the case for things to remain the same.

“I know some of the leaders of the Popular Democratic Party do not like the fact that the territory status was left out of this plebiscite,” said Pierluisi.

“But I hope that Chairman Grijalva and co-sponsors of this bill in the making will stand strong for the principle that we should decolonize Puerto Rico, we should get rid of the current undemocratic status of Puerto Rico and allow the people of Puerto Rico to choose among the three non-territorial status options we have available,” he added.

Since the 1950s, two major parties have ruled over the island’s limited self-government.

The Popular Democratic Party has traditionally favored the territorial status known in English as commonwealth or in Spanish as estado libre asociado, which translates to “free associated state.”

The New Progressive Party, to which Pierluisi and González-Colón belong, is a staunch pro-statehood party.

But the island’s political system has been shaken up, now with five parties represented in the legislature and competing for a say in the territory’s future.

Grijalva, who will be accompanied on his fact-finding mission by Velázquez, González-Colón and Ocasio-Cortez, is due to meet leaders of all five major parties.

If the consensus survives any additions to the bill text wrought during the trip, time will be short for Congress to move on it.

“The plan is to drop or introduce the bill within two weeks or so, then mark it up very expeditiously at the committee of jurisdiction, the Natural Resources Committee, and then take it down to the floor for a vote as soon as the calendar allows. Ideally, that that would happen before the August recess,” said Pierluisi, a former resident commissioner.

If time allows and the consensus holds, the bill is expected to pass the House with some bipartisan support.

But it faces long odds in a deeply divided Senate with few legislative days left in an election year.

“The next challenge will be to get the Senate to address the matter,” said Pierluisi. “But I hope that we find a way for the Senate to take action on this matter as well.”
#Alexandria Ocasio-Cortez  #Ocasio-Cortez
Add Comment