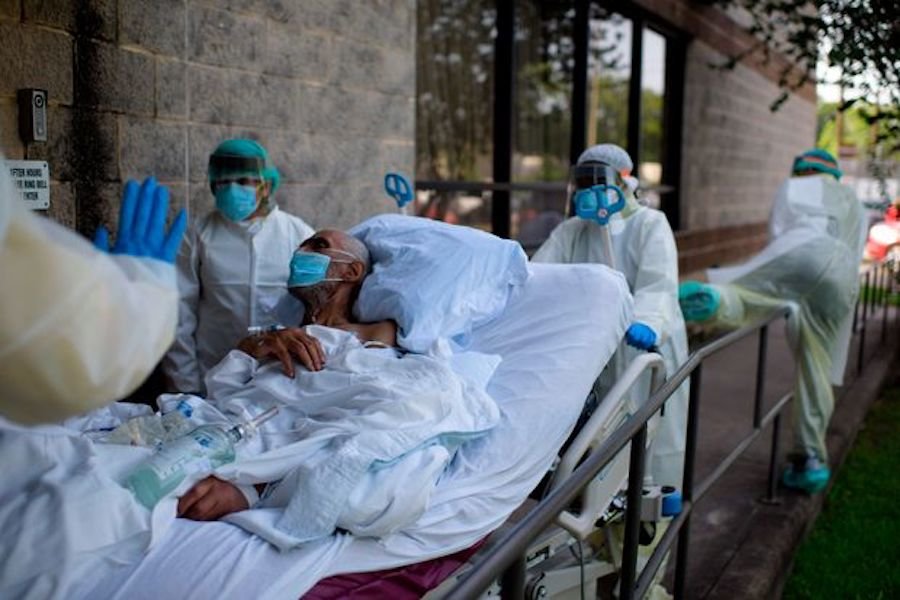 The Covid-19 pandemic has saturated the main hospitals of the public health system. This is confirmed by specialist doctors who yesterday assured that the hospital occupancy margin exceeds 95%, when the ideal is to keep it below 85%.

This scenario is more notable in the Dr. Arnulfo Arias Madrid Hospital Complex of the Social Security Fund (CSS) and in the Santo Tomás Hospital (HST), where new rooms for Covid-19 patients were enabled.

The president of the Association of Specialist Doctors of the CSS, Domingo Moreno , said that the authorities do not give the correct information on the situation facing the health system, but the opening of new rooms and the transfer of patients shows that there are serious problems.

Estimates indicate that for every thousand new cases of Covid-19 reported per day, about 200 will need to go to a hospital.

The president of the Association of Specialist Doctors of the Santo Tomás Hospital, Carmelo Wong, stressed that announcements such as the possibility of hiring foreign doctors and the authorization of convention centers show that the system is being prepared for a difficult time.

The Minister Counselor for Health, Eyra Ruíz, expressed that there is still capacity to receive patients, but acknowledged that the situation would have been complicated in the next 15 days if they had not decided to adapt the Amador and Figali convention centers. The latter will open during the weekend.


The measures that the health authorities are taking to contain the Covid-19 pandemic are a reflection that the virus is out of control and that the health system is gradually lacking the capacity to attend to the affected population in hospitals.

For Wong, who is president of the Association of Specialist Doctors of the Santo Tomás Hospital, the health system ended up collapsing about two weeks ago.

Wong said that in the HST there are about 185 beds occupied with Covid-19 patients, while progress is being made in opening new spaces to house more patients.

When you start transforming general hospitals into Covid-19 hospitals, regardless of whether they declare them as such, but if 80% of hospitalized patients are there for Covid-19, it is a Covid-19 hospital, he said.

Another example of the problems that the health system faces, according to Wong, is that the possibility of looking for specialists abroad is analyzed, because there is not enough in the country.

He stressed that the provision of service centers in convention facilities, such as Amador and Figali, means that a "very strong" scenario is looming.

All this without counting on the exhaustion of health personnel and the shortage of supplies, such as personal protective equipment, he said.

'System is out of date'


Moreno, president of the CSS Association of Specialist Doctors, stated that the Health authorities do not want to recognize the problem.

The system is already out of date, said Moreno, who explained that measures such as moving the Obstetrics service from the Hospital Complex to the Irma hospital in Lourdes Tzanetatos reflects the reengineering that is being carried out.

From the first days of the pandemic, Moreno argued that in the Hospital Complex a policy of swabbing all patients before hospitalization had to be applied, to prevent the entry of the disease into the hospital, as well as to periodically test all health personnel.

He added that this situation is worsened by the lack of capacity to confine patients to intensive care units, which leads them to die in general care rooms, as is now happening, without any justification.

Until yesterday, in the Hospital Complex there were 97 beds available, of which 457 are in the ward, and out of 117 beds in intensive care, there were about 18 left. The authorities of the facility indicated that, due to this occupation, they will enable 35 more intensive care beds today.

In this regard, the Minister Counselor of Health, Eyra Ruíz, said that hospitals still have the capacity to receive patients, and that the situation would have been worse, if they had not made decisions such as the authorization of the Amador and Figali convention centers.

The official stressed that when individually evaluated there are hospitals such as the Santo Tomás Hospital and the Arnulfo Arias Madrid Hospital Complex that will always be full.

In fact, this week they found that, for example, in the hospitals of Panama and Panama Oeste, 112 beds were available in wards, 10 in intensive care and 4 in semi-intensive, so they are generally looking for new spaces.

Ruíz explained that the authorization of the convention centers - like Figali, where they will have 160 beds - what she is looking for is to decongest the hospital rooms. In addition, she announced that they will be launching an awareness campaign so that positive people over 40 and with risk factors, go to hotels to receive a seven-day treatment that will take them away from hospitalization and intensive care rooms, to vacate the emergency rooms.