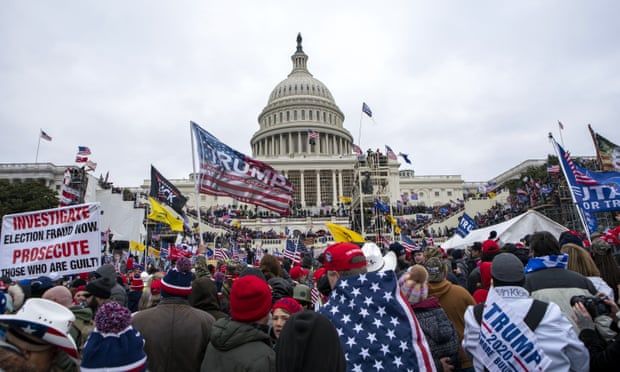 Charles Donohoe will co-operate, giving prosecutors a boost in pursuit of high-ranking members of the far-right group
A member of the far-right Proud Boys group has pleaded guilty to conspiring to attack the US Capitol in a bid to stop Congress certifying Joe Biden’s victory in the 2020 election, giving prosecutors a win in their pursuit of high-ranking members.

As part of an agreement with prosecutors that will require him to cooperate against co-defendants, Charles Donohoe, 34, pleaded guilty on Friday in US district court in Washington to charges of conspiring to obstruct an official proceeding and assaulting Capitol police.

The North Carolina native could face up to 28 years in prison. However, citing federal sentencing guidelines, prosecutors estimated in court records he would serve six or seven years.

The judge, Timothy Kelly, did not immediately set a sentencing date. Five co-defendants, including well-known group members Enrique Tarrio and Dominic Pezzola, are tentatively scheduled to go to trial in May.

In December, Matthew Greene of New York became the first Proud Boys member to admit to a role in the plot to attack the Capitol, as part of a deal with prosecutors. Greene also agreed to cooperate with authorities.

According to prosecutors, on 6 January, Donohoe was among at least 100 Proud Boys who marched from the “Save America” rally near the White House to the Capitol in hope of derailing Congress’ certification of Biden’s victory over Donald Trump.

Donohoe held a high rank in the group. In the days leading up to the rally, he, Tarrio and others used encrypted messaging apps to discuss organizing a “Ministry of Self Defense” that would invade the Capitol.

After arriving at the building, Donohoe threw two water bottles at and pushed past a line of police officers who tried to stop the mob, prosecutors wrote in a summary of the case that Donohoe endorsed.

Donohoe took a picture of Pezzola holding a riot shield just outside the Capitol, bragging in a message to other members of the militia: “Got a riot shield.”

The group made it inside after Pezzola allegedly broke a window, prompting Donohoe to send other messages boasting, “We stormed the capitol unarmed” and “took it over unarmed” because “the people are … done”.

A bipartisan Senate report connected seven deaths to the riot, which temporarily slowed certification of Biden’s win as lawmakers fled. About 140 police officers were injured.

Authorities have charged more than 800 people in connection with the attack, with one particularly high-profile case filed in federal court in Washington taking aim at Donohoe, Tarrio – who was not at the Capitol on 6 January – Pezzola and three other Proud Boys members.

Donohoe has been held in federal detention since his arrest in March last year. Tarrio, Pezzola, Ethan Nordean, Joseph Biggs and Zachary Rehl have pleaded not guilty and for now intend to go to trial, beginning 18 May.

All six defendants are also named in a pending federal lawsuit from the District of Columbia which demands damages from the Proud Boys and the Oath Keepers, another far-right group, over the Capitol attack.
#Donald Trump  #Joe Biden
Add Comment