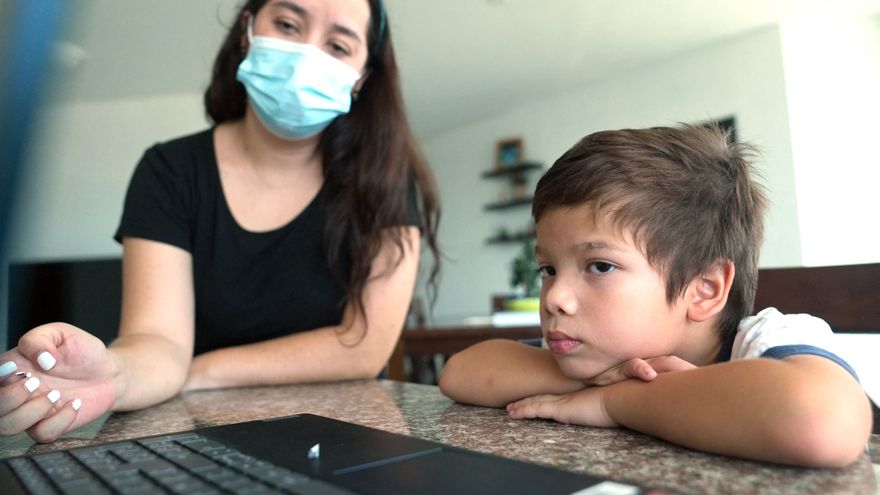 Yoselin was left without a nursery. Brithany is suspended from virtual classes. Rafael still resists studying in front of the computer while Santiago has a teacher at home, outside the formal system. In Panama, children, and their parents, suffer more and more with the prolonged closure of schools.

Érica Luna, a Nicaraguan immigrant, is 29 years old and the mother of Yoselin, 3. They live in the San Isidro neighborhood, on the outskirts of Panama City, where houses with zinc roofs emerge from the hills full of vegetation. Her husband works all day and she, due to the pandemic, stopped cleaning houses.

She chose to work in a market in the neighborhood. "The pandemic has transformed us a lot. I used to take the girl to a nursery, now it's not possible. There are times when I have to bring her here to the place where I work," she explains.

READ ALSO: Unicef: It's not possible that shopping centers are open but not Schools

Érica periodically collects material that the public nursery gives her. But Yoselin spends most of her time with her mother's cell phone, with a video game, until she falls asleep on a cardboard, at her mother's feet at the fruit stand.

Latin America is the region that has spent the longest time without face-to-face classes, according to Unicef. Panama, like Ecuador and Peru, still do not receive students in their schools in 2021.

According to Unicef, at least 3 million children in the region will never return to classrooms, after this prolonged closure that began in 2020, when the pandemic broke out. Keeping the closure this year will have serious consequences.

In Santa Rita, another suburban neighborhood, 8-year-old Brithany attends occasional virtual classes from her mother Milena Mendosa's prepaid cell phone, who sometimes has to leave the girl with a neighbor while she works in a market or cleaning houses.

Sometimes virtual classes are canceled. Others, the cell phone signal weakens and it becomes difficult to hear the lesson. Then I have to go out with my daughter, says Milena, a single mother.

I feel that it is an extra burden. They are giving too many brochures, they pressure one too much, I feel that it is something very difficult because it is one more job, Mendosa considers about the material she receives to deepen her daughter's education at home.

Panama has 4.2 million inhabitants and, according to official figures for 2021, some 890,000 are schoolchildren.

Panamanian Krystal Pérez is the mother living in Santiago. Detecting her son's boredom in front of a screen, she organized together with other mothers to remove them from private school and have a teacher teach them at home.

"That was what saved the education of our children, because 5, 6, 7 hours on the screen were not going to work for us," she explains, while his son attends the teacher with half a dozen children, in an apartment of a high-rise building in Punta Paitilla, in the urban area of ​​Panama City.

French Carolina Castillón, Leonor's mother, is also a member of this group. "We left the system at once. The school left us alone, there was no other option," she confesses.

In San Francisco, another urban neighborhood in the capital, Rafael, 5, is still part of the resistance and receives classes on the computer. But his mother, Ana María Areiza, won't take this much longer.

"I miss my son coming back from school telling me stories. He sees his friends on the computer and he doesn't recognize them. He no longer has to tell me," she confesses.

The child needs other humans to learn the behavior and qualities of the culture in which he lives. Not being with others delays the child and can generate behavior problems, explains pediatrician and neonatologist Enrique Ruidíaz.

Unicef ​​mentions studies that explain that schools are not the main contagion point for covid-19, and that with health measures, classes can restart.

It cannot be possible for restaurants to open, for shopping centers to open and for schools not to open, says Ruth Custode, specialist for Latin America at UNICEF in Panama.

The Minister of Education of Panama, Maruja Gorday, says that she "endorses" the call of Unicef ​​and that the reopening is near.

The reopening, expected in April, will be gradual, progressive and safe to the extent that we advance in vaccination and that the health authorities urge us to initiate a closer process, we are ready to do so, he explained to the AFP News.

Meanwhile, Brithany, who likes English and already knows how to count to 1,000, sums up the sentiment of her generation: "I want this to end."