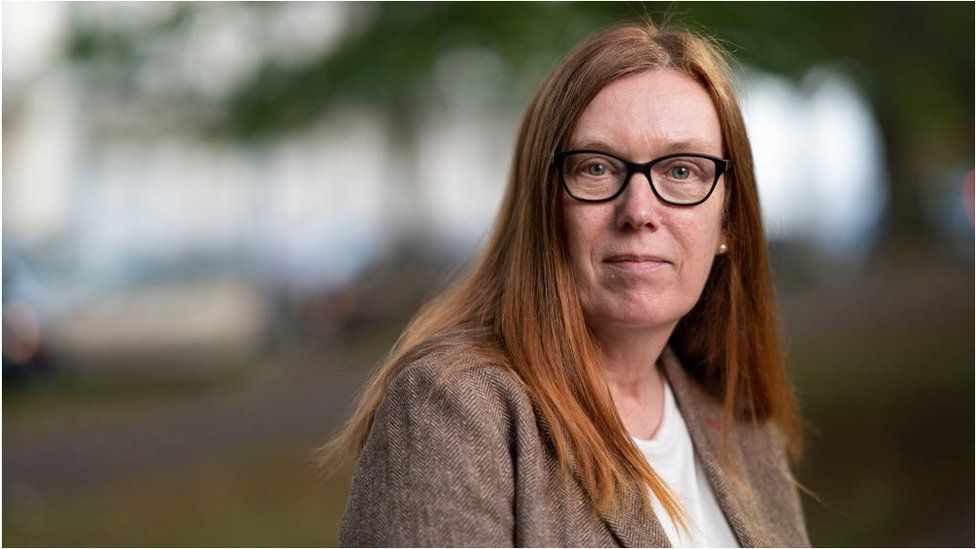 Medical science has transformed the pandemic, and the experimental technologies that helped develop vaccines in record time have strapped rocket boosters to scientific ambitions. Could we be entering a golden age of new vaccines?

If you head to the cutting edge of vaccinology you will find Prof Dame Sarah Gilbert, from the Jenner Institute and the architect of the Oxford vaccine.

Using a revolutionary technology, the team at Oxford had a vaccine ready to start clinical trials in just 65 days. In partnership with pharma giant AstraZeneca, more than 1.5 billion doses have been distributed around the world.
You might assume that once you had reached the top of your professional tree you would be free to think profound thoughts that push the boundaries of human knowledge. Yet nearly every time I interview Prof Gilbert, I get the sense that a huge chunk of her time is taken up buying fridges and freezers. After all, if you can't keep viral samples and prototype vaccines cold then you can't do vaccine research.

"I'm still being asked for more," Prof Gilbert tells me.

But the kitchen, where such appliances are most commonly found, is not a bad place to build an understanding of the leap in vaccine science achieved by Prof Gilbert and her contemporaries.

The new generation of vaccines are quick to make and highly flexible. "It's like decorating a cake," says Prof Gilbert.

The old-school method of developing vaccines means you must go back to the raw materials and start from scratch for every vaccine you make. It is like starting with a bench of flour, sugar, eggs and butter. The next step is to take the offending virus, or other disease-causing microbes, and either kill it or weaken it to make a vaccine.

Take the two seasonal flu vaccines that are given each year. The adult jab is made by growing influenza viruses inside eggs. The viruses are then purified and killed to make the vaccine. The nasal spray for children has live viruses, but these are made weak and unstable so they can grow in the cooler temperatures of the nose, but not in the warmth of the lungs.

But it takes a lot of work to start from scratch for every new disease and there is plenty that can go wrong. You can end up with the vaccine-equivalent of a soggy bottom.

With this type of vaccine most of the work has already been done - the cake has been pre-baked, it just needs to be "decorated" in order to match its target.

"We've got the cake and we can put a cherry on top, or we can put some pistachios on top if we want a different vaccine, we just add the last bit and then we're ready to go," Prof Gilbert tells Inside Health. 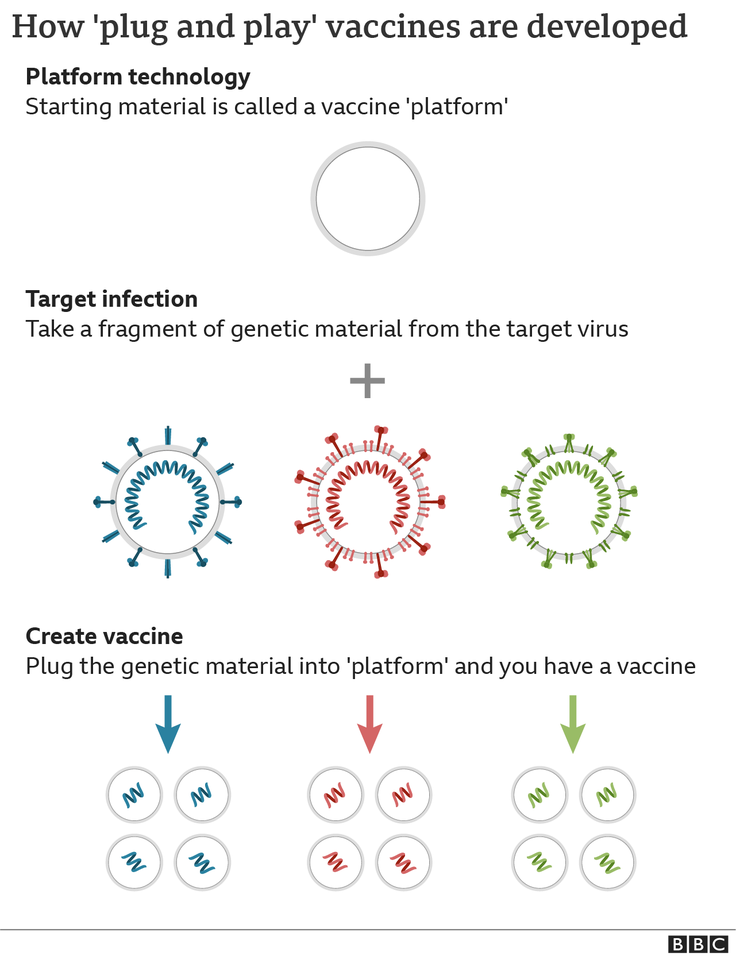 The Oxford vaccine's "cake" - or platform, to employ the scientific term - is a virus that causes the common cold in chimpanzees. It has been genetically modified to make it safe so that it cannot cause an infection in people. The "decoration" is whichever genetic blueprint is needed to train the immune system to attack. Such a blueprint is added to the cake and job done.

It was this work, applied to the Sars-Cov-2 coronavirus, that led to Prof Gilbert's many accolades which range from a damehood to a Barbie doll made in her image. "Barbie's comfortably ensconced in my office, but yeah I am thinking of sending Barbie as a stand-in.

"It would be useful to have a double who could go and do interviews for me," she says.

Two of the other big Covid vaccines - one made by Pfizer-BioNTech and the other by Moderna - use another style of highly adaptable plug-and-play vaccine technology. And all these technologies should make it quicker and easier to develop the vaccines of the future.

"There's a lot of vaccine development that we need to do now that we can do it," says Prof Gilbert.

Top of her list of targets are the official "priority pathogens". While Covid was a surprise, these are the deadly known threats that are bubbling away. They have the potential to cause large outbreaks and could be the pandemics of the future. Vaccines against them would save lives.

Some of this work is already under way. Oxford has started clinical trials of a plague vaccine using its plug-and-play technology. Plague infamously caused the Black Death pandemic killing hundreds of millions of people. Separately Moderna is already looking at using its own mRNA technology to make a Nipah vaccine. The virus kills up to three-quarters of infected people.

Yet, the big barrier for tackling these diseases will be the same as it has always been - money. They affect some of the poorest parts of the world and there is concern that, even in the wake of pandemic, research won't be funded.

And, while vaccine technology has leapt forward - the old enemies are still the same and some have tricksy quirks that mean they pose monumental challenges.

All vaccines need a target - called an antigen - that they train the immune system to attack.

For all the problems Covid has caused, the virus was a pretty simple beast and the target antigen was blatantly obvious. The outer surface of the virus is covered in spike proteins. So all researchers had to do was plug in the genetic blueprints for the spike protein, train the body to recognise it and be pretty confident that the vaccine was going to work.

However, the target antigen is not obvious in other more complex microbes such as the three big killers - malaria, HIV and tuberculosis. HIV is a constantly moving target. It is a shape-shifter that rapidly mutates in order to alter its appearance and outwit our immune system. It is hard to know how to pin it down.

We already have vaccines against malaria and tuberculosis, but they are far from perfect.

The world rightly celebrated the rollout of the first malaria vaccine in Africa, this month, but it is only about 30% effective at preventing severe disease. That's because the malaria parasite has a complex life-cycle, during which it morphs into a variety of forms, across two species. A tuberculosis bacterium is also far more complex than a coronavirus.

There's a long list of antigens to choose from in TB and malaria, and the right one has remained frustratingly elusive.

"There's such a huge range of choices, and it's not obvious what we should be using," Prof Gilbert tells me. "It's taking a long time to find the right antigen, so that's much more difficult. They are much more difficult than with these outbreak pathogens, which are fairly simple viruses."

However, BioNTech is using its tech to try to develop an HIV vaccine.

So, if plug-and-play was the revolution that was proven during the pandemic, what's next on the horizon?

"I think the next big leap in vaccines, rather than totally new technologies, is making the technologies we've got more stable, that will be great," says Prof Gilbert.

Vaccines are a bit like Goldilocks - they need to be kept at just the right temperature from the moment they're made to the moment they're given. It means there's a global network of freezers, fridges, cold boxes and so on, known as the cold chain. But it is hard to get vaccines to some of the remotest and poorest parts of the world, particularly where there is no electricity.

She also says it would be "really good" if we could get vaccines that don't require needles.

It might be better to stop giving some vaccines as injections. You may get a better immune response to some lung infections (such as Covid) by giving them as a spray. "Because that's where the virus itself would normally go, it's different if you've got a blood-borne infection like Dengue fever."

"But this is something that we can't do very quickly, there is quite a lot of vaccine testing to be done".