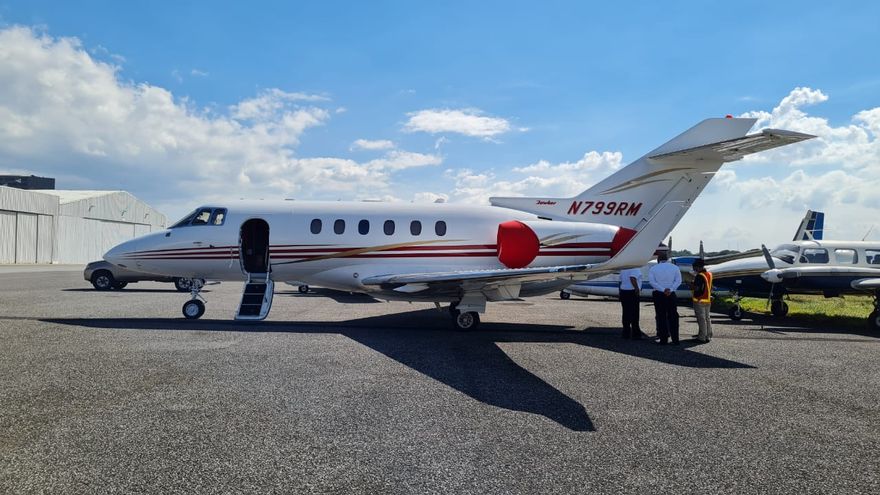 The spokesman for the National Civil Police of Guatemala, Jorge Aguilar revealed to RPC Radio that the process of withholding the private jet of former President Ricardo Martinelli, with registration number N799RM, was carried out at the request of the United States justice, noting that it had no illicit substances, but which will remain seized while it is investigated.

"It is important to mention that yesterday (Friday) the Guatemalan National Civil Police, working together with the Public Ministry at the request of the US authorities, was instructed to immobilize, in this case, an aircraft owned by former Panamanian President Martinelli. The National Civil Police has gone to the interior of the La Aurora International Airport to find out as soon as this aircraft enters Guatemalan territory ... and immediately begins with the procedures to directly immobilize this aircraft," said the spokesperson.

Aguilar details that the process for the immobilization of the aircraft was carried out by the Anti-narcotics Prosecutor's Office and the Antinarcotics Police with the use of narcotics dogs to make sure no illicit substances were in the plane.

Petition of the United States Justice


Aguilar reiterates that this retention action is carried out at the request of the US authorities, although he assures that the cause of the legal action is not specified, and points out that the aircraft is kept inside the La Aurora airport and is guarded by the National Civil Police.

The confiscation responds to a request from the United States to seize Martinelli's private plane, here it is important to mention that it is a private jet that has been seized and the investigation continues. It must be taken into account that a few months ago some people were detained here, who turned out to be the sons of the ex-president and the work continues by the National Civil Police, it is a work in coordination with international authorities at the request that it is an issue of extradition, issues of seizures and immobilizations in this case, Aguilar added.

The spokesperson added that no illicit substance was found on the plane, and that the two people who were traveling in it did not maintain arrest warrants issued by Panama, Interpol, or Guatemala.

Previously, it had been reported that the ex-president's wife, Marta Linares de Martinelli and her daughter-in-law traveled to Guatemala to visit the brothers Luis Enrique and Ricardo Martinelli Linares, detained for the alleged conspiracy to commit the crime of money laundering and for hiding information about money laundering, which involves the Odebrecht company, between 2013 and 2015.

For his part, the ex-president Ricardo Martinelli showed the inspection report on his Twitter account and highlights that it was an anonymous complaint from a false email account, also points out that nothing was found and asks that the seized asset be returned.

Martinelli rejected the versions about the hijacking of his Hawker800XP plane at the request of the United States. According to Martinelli, his plane has been detained, but following an anonymous complaint from Panama.

Martinelli, who sent his version to La Estrella de Panamá, thinks that his plane "is to divert attention from the National Secretariat for Children, Adolescents and Family (SENNIAF) and the prosecutor."

The inspection that was done of the plane in Guatemala, as a result of the anonymous complaint, was negative. Now Martinelli demands the immediate return of his plane.