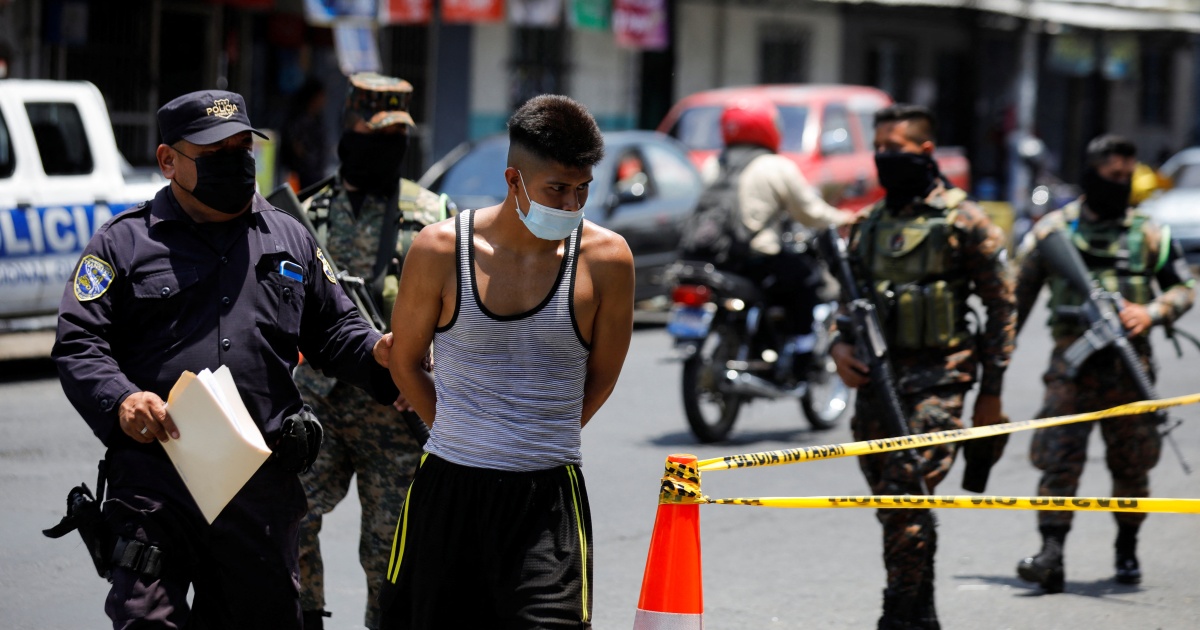 Wilfredo Gutierrez had planned a quick run to a store near his home in Soyapango, on the outskirts of San Salvador, when he encountered a soldier. “Shut up and turn towards the wall,” the 38-year-old call centre worker says the soldier instructed him that night on April 8.

It was around 9pm, Gutierrez recalls, and many of his neighbours were soon standing next to him, their hands cinched with the same plastic ties.

“Why are they saying that they want more?” Gutierrez remembers asking himself about the conversations he overheard between the heavily armed members of the Salvadoran military. In total, 21 men including Gutierrez were handed off to the police, the only institution with the power to carry out arrests in El Salvador.

“Just because the state has given them the authority, they think that they can supposedly do whatever they want and no one can say anything,” Gutierrez told Al Jazeera in an interview.

The arrests came amid a sweeping anti-gang crackdown that began in late March in response to a spike in homicides.

President Nayib Bukele and his party have defended their response – including the use of a “state of exception” that suspends certain civil liberties – as necessary and successful in the fight against gang violence, which the Central American country has long grappled with.

But the police, military and judicial system have faced explicit and implicit pressure to implement the government’s mass arrest and incarceration policy, experts say. Sources also told Al Jazeera that police have been tasked with filling an arrests quota, something rights groups say has led to arbitrary detentions and threatens to overwhelm an already overburdened penitentiary system.

Police have been told to fill an arrest quota since the start of the state of exception, according to Marvin Reyes, general secretary for the Movement of Workers of the Salvadoran National Police, a police union with roughly 3,000 members nationwide, who said he has received reports from dozens of members of the organisation.

The quota varies depending on the size of the municipality, and has fluctuated throughout the state of exception, Reyes said. The countrywide quota reached as high as 1,000 per day around the end of April, then dropped to about 500 daily arrests across different police sectors, he told Al Jazeera.

Now, there is no daily quota but police must meet a general goal post by the end of the state of exception, he said. The military is also expected to contribute to this quota by identifying people for arrest and then referring them to the police, Reyes said.

The president’s office, the National Police and the ministry of justice and public security did not respond to Al Jazeera’s requests for comment on the quotas. A police spokesperson denied the existence of quotas in a statement to the Reuters news agency this month, saying that such an order is considered a serious offence and urging staff to report it.

As of May 25, the National Police said more than 34,500 people had been arrested for alleged gang ties and other gang-related offences, such as extortion. Bukele has said there are an estimated 70,000 gang members in El Salvador, and on Wednesday, the legislature voted to extend the state of exception for another 30 days to continue the government’s “war” on gangs.

According to Reyes, by the time the state of exception was meant to expire on May 27, police had been told they needed to detain 35,000 people.

But Gutierrez told Al Jazeera he has no gang ties.

He was released less than 24 hours after being detained, he said. When he asked the police officer why he was being detained and investigated for potential gang connections, he said the officer replied: “We have to go through the process, because the order comes from above.”

Reyes said people like Gutierrez who are detained and then released are still included in the police force’s total number of arrests. Arrests should “not be a competition”, but rather should focus on “searching for who is really a criminal”, he added. 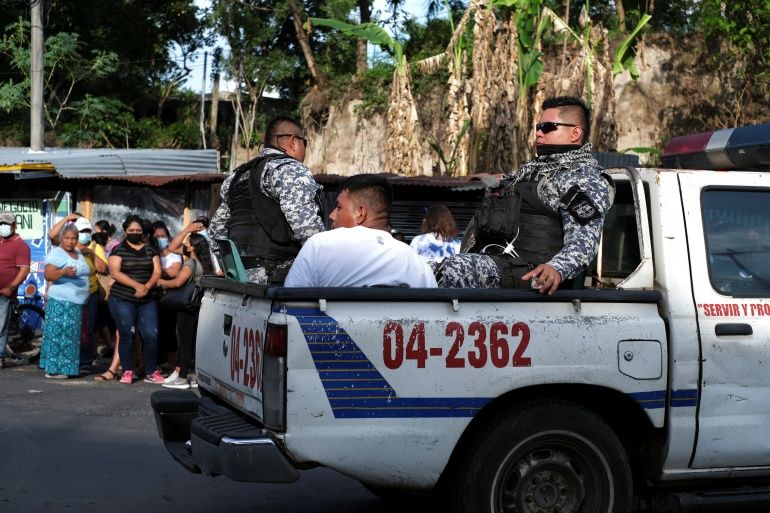 On Wednesday, the legislature voted to extend the state of exception for another 30 days

Many of the people detained under the state of exception have been charged with “illicit association”, meaning that they are accused of working with a gang or criminal group in some way, according to a report by Human Rights Watch and Salvadoran NGO Cristosal.

As part of the crackdown, legislators also passed a reform to increase penalties for gang-related crimes and reduced the age at which children can be charged for belonging to gangs or “terrorist” groups from 16 to 12.

Yet Reyes said many of the people arrested have not been investigated previously for gang connections. Several families also recently told Al Jazeera that their relatives investigated for this crime have no gang ties.

Judges would usually have discretion to allow these people to wait for their hearings outside of prison, given that cases can take years to weave their way through the Salvadoran justice system.

But the Bukele administration has taken steps to limit judicial independence under the state of exception, and has expressed a clear preference for mass incarceration, said Hector Carrillo, director of access to justice at the Foundation for the Study of Law (FESPAD), a Salvadoran NGO.

Many of the people arrested under the state of exception have been transferred to pre-trial detention while their cases make their way through the system, a process that could take six months but can also be extended by a judge. 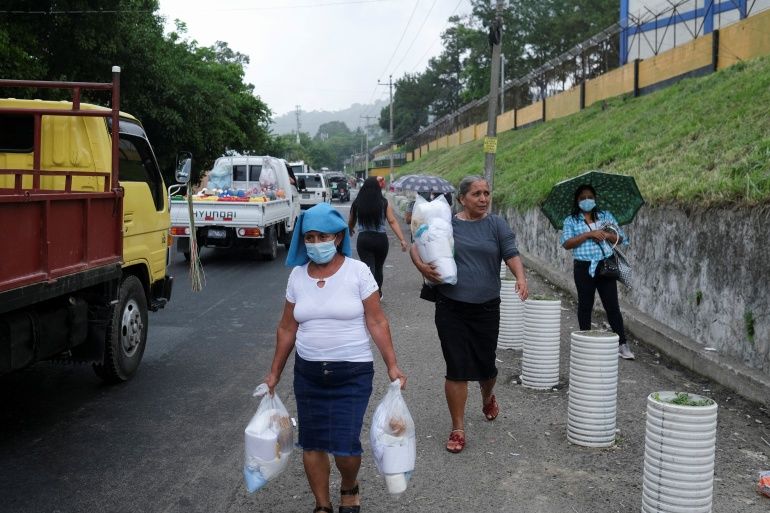 Women carry supply packages for their relatives who were detained during the state of emergency, outside La Esperanza prison, in Ayutuxtepeque, El Salvador

A reform passed under the state of exception limits judges from granting alternative measures to pre-trial detention, such as bail or house arrest. Carrillo said the reform is unconstitutional and violates the International Covenant on Civil and Political Rights, to which El Salvador is a party.

Carrillo said his organisation has not documented an explicit practice of pressuring judges to make certain decisions under the state of exception. But he said the political context in El Salvador sends an implicit message to judges who would contradict Bukele and his party’s policies.

The government “has tried to equate any questioning of its decisions — whether it be from media or civil society — to support of criminal groups,” Carrillo told Al Jazeera. “So if a judge has that in his or her mind at the moment of making a decision in a courtroom, there is no guarantee of the free exercise of justice.”

Another reform passed last year allows the Supreme Court, stacked by Bukele loyalists, to name and transfer judges. When a judge ruled in April that a case lacked evidence to convict 42 gang members for homicide, Bukele called on the Supreme Court to exercise this power to “remove judges complicit with organised crime”.

The court transferred the judge to a new court shortly after. It has also used this power to transfer a judge who rejected a defamation lawsuit filed by a legislator from Bukele’s party and another who granted bail to two members of the past government and ordered another to house arrest.

“When we see public declarations of the president of the republic against judges, that gives us a sense of what judges can be interpreting,” said Carrillo. “There is an open external interference towards the judicial profession.”

Antonio Duran, a judge who was transferred to a different court in September 2021 after speaking out against the Bukele administration, said the lack of independence in the court system during the state of exception is a result of the erosion of independent institutions.

Duran said that process began on May 1 of last year, when members of Bukele’s party assumed a supermajority in El Salvador’s legislative assembly and immediately moved to remove the attorney general and Supreme Court judges.

“The Supreme Court has been co-opted completely, and kidnapped by the executive branch,” Duran told Al Jazeera. “There is no separation of power. It does what the presidential house says.”

Mag Illa 27 days ago
First, Al Jazeera like Fox or CNN has an agenda, consider the source of your information. That being said, which bad guys do you fear the most, the government or the gangs? Not an easy solution. Good luck to the Salvadorian people.
View all comments (1)Add comment