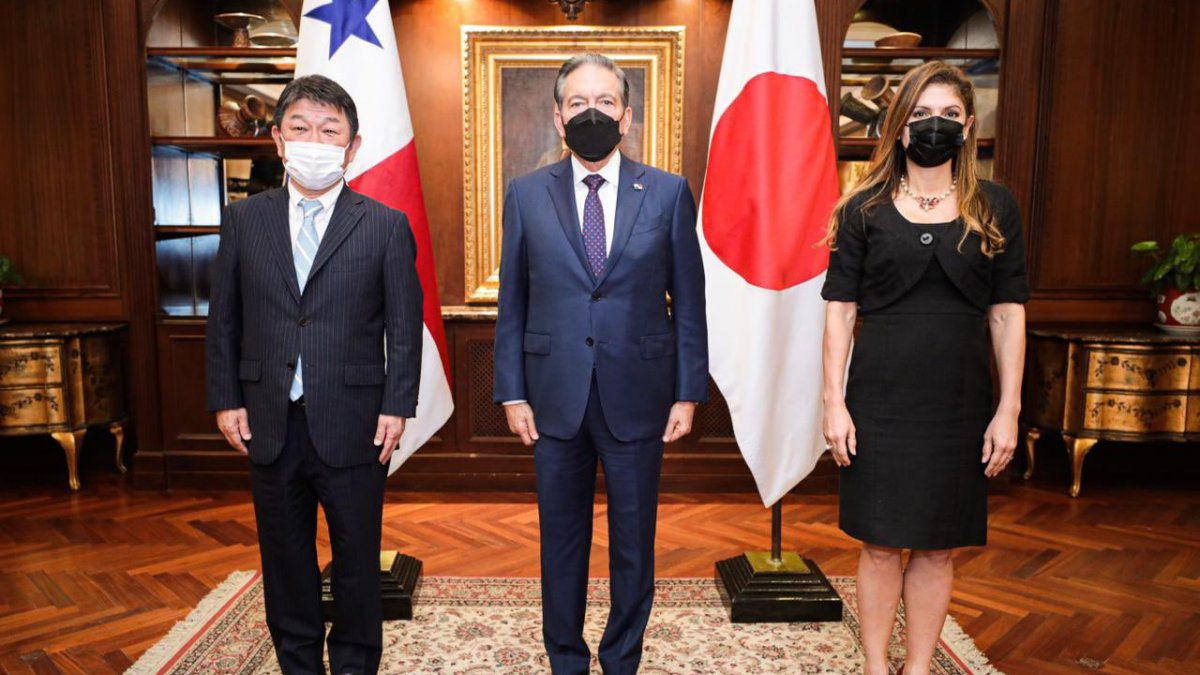 The Foreign Minister of Japan, Toshimitsu Motegi arrived in Panama this Saturday, on a tour to consolidate economic ties with Central America and the Caribbean.

The Panamanian president, Laurentino Cortizo, held a meeting this Saturday, July 17, with the Minister of Foreign Affairs of Japan, Toshimitsu Motegi, to strengthen trade relations between the two countries.

The Presidency reported that President Cortizo and Foreign Minister Motegi addressed issues related to the Panama Canal, the increase in the commercial relationship, the interest of Japanese investment in Panama, donations to alleviate the pandemic, the Tokyo Olympics and other regional issues.

During the meeting, Foreign Minister Toshimitsu Motegi expressed to President Laurentino Cortizo the interest of the Government of Japan in increasing investments and strengthening the commercial relationship between both nations, particularly in investing in the tunnel to be built under the Panama Canal and the interest of Japan to provide quality infrastructure for Metro Line 3, which is currently being built towards West Panama.

Cortizo said that the proposal will be analyzed by the Panamanian team in charge of the construction of the tunnel.

He indicated that to strengthen the commercial and investment relationship, Panama and Japan should designate a team to study the possibility of increasing exports and strengthening investments, taking advantage of the public-private partnership law.

He announced that the Panamanian Foreign Ministry is organizing a tour to Japan next year, whose delegation must be made up of government officials and private sector businessmen.

However, President Laurentino Cortizo stressed that before that tour the binational team must be formed and installed for the mission to Japan to be successful.

Regarding the Panama Canal, the Chancellor of Japan highlighted the importance of the waterway and its Expanded Canal for the ships of that nation, since 14% of the transit of its fleet passes through the Panamanian interoceanic route, being its second user larger.

On the other hand, Cortizo thanked Motegi for the help that the Government of Japan has provided to Panama in the midst of the pandemic, such as the donation of 12 thousand tablets of the antiviral favipiravir and medical equipment valued at B / .5.6 million.

Toshimitsu Motegi arrived in Panama this Saturday, on a tour to consolidate economic ties with Central America and the Caribbean.

Upon his arrival in Panama, the Foreign Minister of Japan was received by the Vice Chancellor of the Republic, Dayra Carrizo.

Toshimitsu Motegi's agenda in Panama also includes a visit to the Canal and a meeting with Foreign Minister Erika Mouynes this Sunday.

In addition, Motegi will visit Cuba and Jamaica.

Ahcmon 71 days ago
These funny actors might sitting together and discussing about how to avoid the upcoming trials, which will end them!
View all comments (1)Add comment