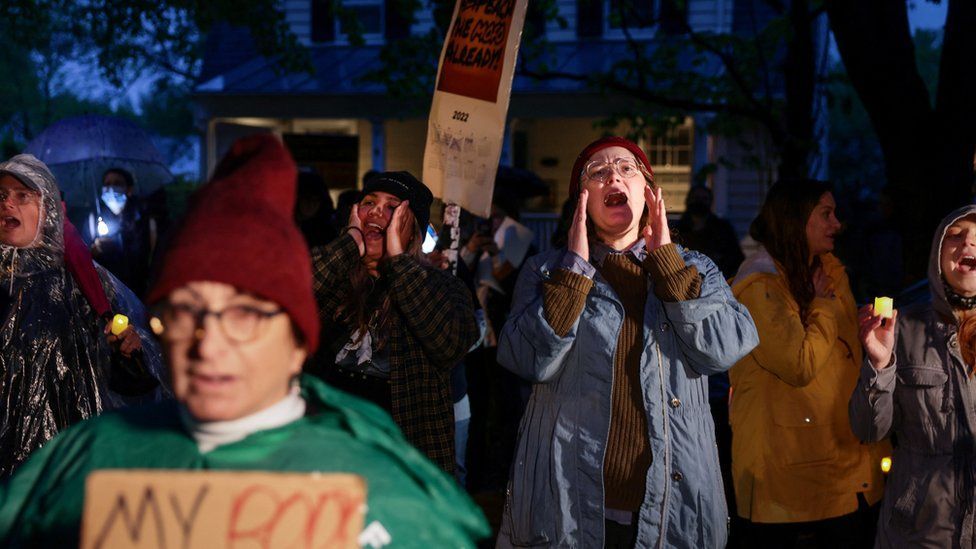 US law enforcement agencies are beefing up security around Supreme Court justices after a leak suggested they may overturn legalised abortion.

The US Marshals Service said on Monday it was helping the agencies normally tasked with the judges' security.

Left-wing activists gathered at the homes of two conservative justices this weekend.

Another protest is planned on Monday night at Justice Samuel Alito's house in Alexandria, Virginia.

On Saturday night, a group of about 100 people marched from the home of Justice Brett Kavanaugh to Chief Justice John Roberts' house nearby in Chevy Chase, Maryland.

Separately, an anti-abortion centre suffered an arson attack on Sunday.

On Monday night, the group Shut Down DC planned to march on Justice Alito's house for a candlelight vigil and to "hold a moment of silence for the rights we know are ours".

The White House said on Monday demonstrations should never include "violence, threats or vandalism".

"[President Biden] strongly believes in the constitutional right to protest," said a statement from his press secretary Jen Psaki.

"But that should never include violence, threats, or vandalism. Judges perform an incredibly important function in our society, and they must be able to do their jobs without concern for their personal safety."

On Monday, the US Marshals Service announced it was helping the police agencies normally tasked with the security of the Supreme Court's nine justices.

The US Marshals Service said the decision to back up the justices' security detail came "in response to increased security concerns stemming from the unauthorised release of the draft opinion".

Meanwhile, vandals set fire on Sunday morning to the headquarters of Wisconsin Family Action, an anti-abortion group, in what police called a targeted attack.

A message was spray-painted outside the building: "If abortions aren't safe then you aren't either." An unignited petrol bomb was also found at the scene.

A non-profit organisation in Texas that provides pregnant women with free health assistance and encourages them not to get abortions was also targeted by spray-paint over the weekend.

According to the Denton Record-Chronicle, the words "not a clinic" and "forced birth is murder" were daubed outside the entrance. 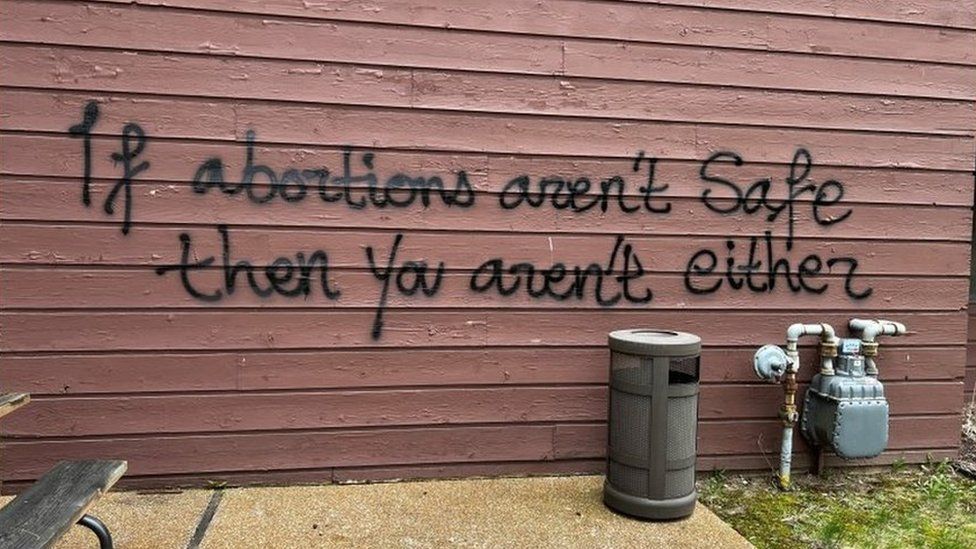 The message at Wisconsin Family Action's building in Madison

A draft opinion leaked last week suggests a majority of the Supreme Court would overturn US women's federally protected right to abortion.

Such a move would hand the issue of abortion rights over to individual US states, many of which are planning laws to ban the procedure.

The court's final ruling is expected in June.

The leaked document, penned by conservative Justice Alito, called the 1973 Roe v Wade decision - which legalised abortion across the US - "egregiously wrong from the start".

If Roe is overturned, a ban on almost all abortions would go into effect in 13 states straight away, with others expected to follow. Abortion would still be legal in around half of US states, it is forecast.

New York also said it plans to offer funding to groups that help people travel to the state for abortions.

Both pro- and anti-abortion protesters have rallied at the steps of the Supreme Court in Washington DC since the leak.

In scenes reminiscent of the unrest following the attack at the US Capitol last year, 8ft high fencing has been erected around the building.

Thousands more Americans rallied in cities and communities over the Mother's Day weekend, from Chicago, Illinois, to Houston, Texas.

On Saturday 14 May, thousands are expected to gather in Washington for the return of the Women's March.

Similar "Bans Off Our Bodies" events organised by the Women's March and Planned Parenthood are being organised in other US cities, including Atlanta, New York and Austin.