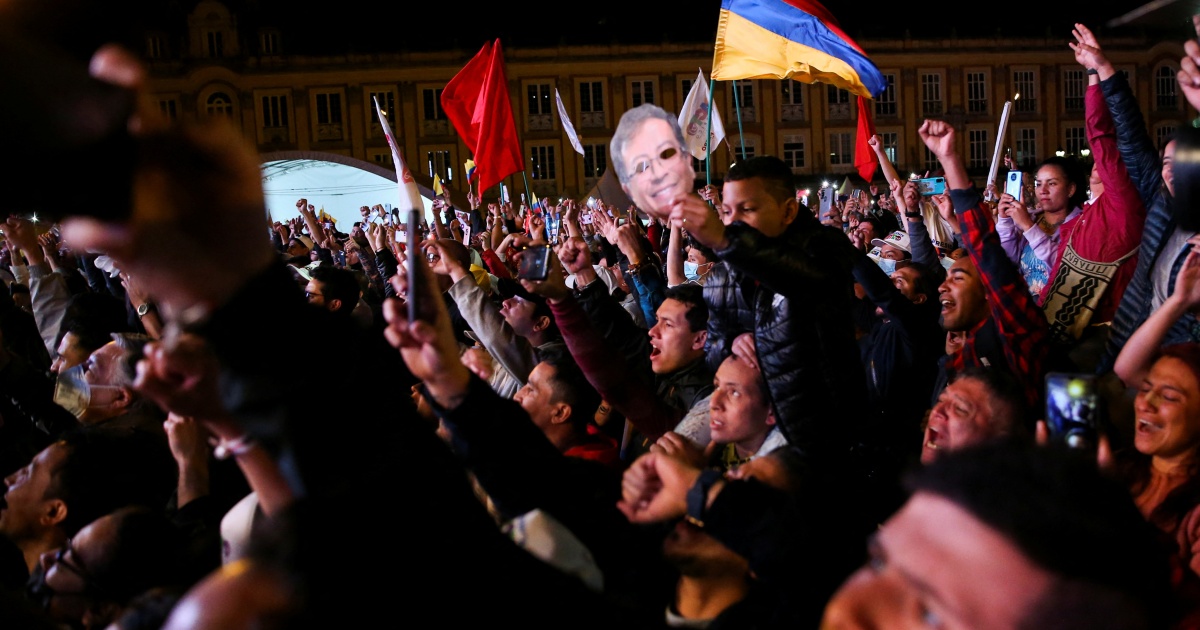 As Colombia prepares for the first round of its highly contested presidential elections on Sunday, the word that seems to be on everyone’s mind is “change”.

Up until recently, the race has been largely dominated by two candidates that have grown to represent the political and social divisions that split the polarised South American country.

On one side, left-wing former rebel fighter Gustavo Petro and his vice-presidential running mate, Afro-Colombian activist Francia Marquez, have overwhelmingly led polls with a promise of decreasing inequality and poverty and an anti-establishment message.

On the other side is conservative civil engineer Federico “Fico” Gutierrez, who has trailed Petro but is attracting the support of many right-wing Colombians as well as the country’s political establishment, which fears what electing Petro could mean.

Yet, in recent weeks, a curveball candidate has rapidly gained momentum, throwing a once clear-cut race into uncertain waters.

“There are no clear winners right now,” said Sandra Borda, a political science professor at Universidad de los Andes in Bogota, the capital. “There’s a lot of uncertainty of what is going to happen.”

Rodolfo Hernandez, a right-leaning independent populist who has largely lagged behind in the race so far, has made a surprising jump in popularity in multiple polls.

He has gone from having 9.6 percent of the vote last month to 19.1 percent, according to a May 19 poll by Centro Nacional de Consultoria, putting him neck-and-neck with conservative competitor Gutierrez.

“The Colombian people and I are the only ones who can beat Petro in the second round,” Hernandez recently said, tweeting out poll results. “I will be your president.”

But the populist candidate, often compared to former US President Donald Trump, has set political observers like Borda on edge.

Hernandez, 77, amassed a fortune from a construction business in the northeastern Santander region. The former mayor of the small northern city of Bucaramanga, he gained notoriety for his blunt, unfiltered way of speaking and his promises to do away with endemic corruption.

Over the years, the now-candidate has been sued by a firefighter after Hernandez called the fire department “fat and lazy”, made xenophobic comments about Venezuelan migrant women, and, in 2018, hit a city councilman in the face while on camera after a heated argument. 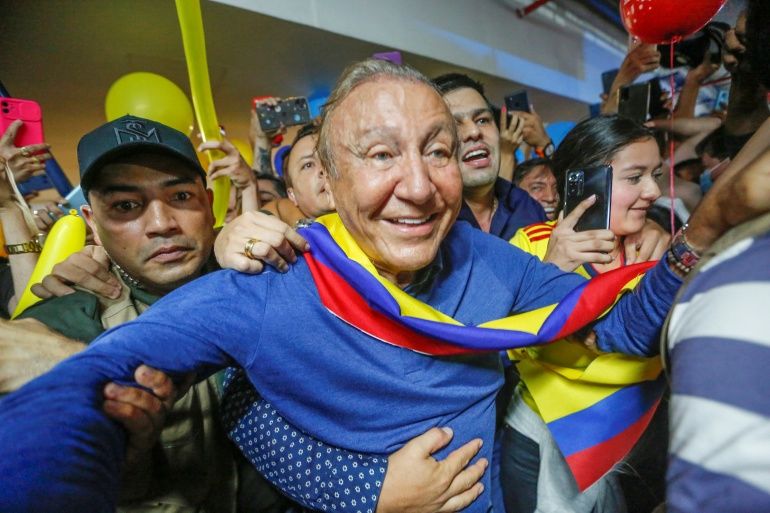 In a 2016 interview with a Colombian radio station, he also told the hosts, “I am a huge follower of a great German thinker: Adolf Hitler.” Hernandez later apologised, saying the person he actually meant to cite was Albert Einstein.

Yet his anti-corruption message and position as a relative outsider have gained the support of many Colombians, including 74-year-old Ligia del Carmen Roa, who stood outside one of Hernandez’s campaign centres in Bogota.

She wore a bright yellow t-shirt with Hernandez’s face on it, honking horns and handing out fliers to passersby. Many of the volunteers, she said, were like her: from a poorer neighbourhood and hopeful that Hernandez was different from the politicians that have historically excluded them.

“It would be an about-face [for Colombia], he would be a total change,” del Carmen Roa told Al Jazeera. “And that’s what Colombia needs right now. It’s urgent. He’s the one that can get us out of this bad place we’re in.”

If any candidate wins more than half the votes on Sunday, they will become Colombia’s next president, taking over from Ivan Duque, who defeated Petro in 2018 with the backing of Colombia’s political elite and has now become one of the most unpopular leaders in decades.

If that 50 percent threshold is not met, the two top candidates will move on to the next round of elections in late June.

Petro holds around 40 percent support, according to recent polls, while conservatives Gutierrez and Hernandez each have about 20 percent, respectively. 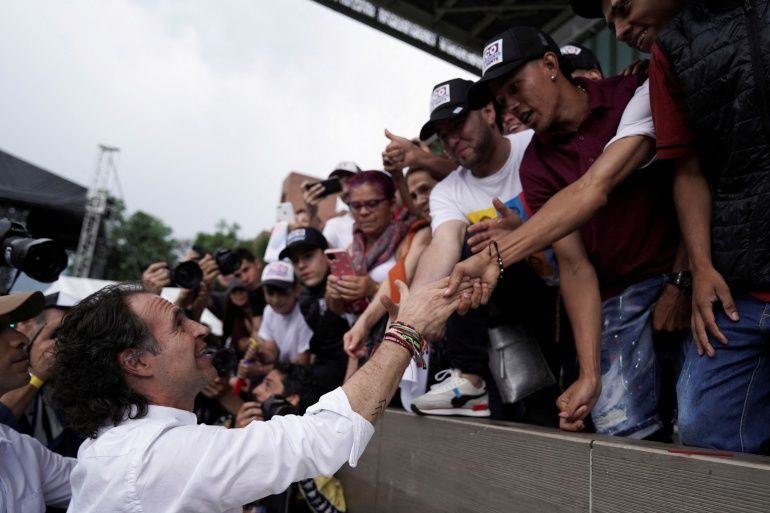 While Petro is expected to win handily in the first round, if Petro and Hernandez go head-to-head in a second-round vote on June 19, polling suggests that it will be a close fight.

Both candidates are speaking to grievances held by large segments of the Colombian electorate, which have only grown in recent years, said Arlene Tickner, a political science professor at Bogota’s Universidad de Rosario.

“Hernandez actually expresses many of the discourses of the establishment while at the same time presenting himself as something different,” Tickner told Al Jazeera. “And he is obviously much more conservative than Petro.”

As poverty and inequality worsened during the COVID-19 pandemic, Colombia has seen a surge in armed group violence in the countryside, something critics say is a product of failures by the government to implement the country’s 2016 peace accords.

Meanwhile, mass anti-government protests last year made global headlines after they were met by a violent backlash by Colombian security forces.

In May, an Invamer poll found that nearly 75 percent of Colombians felt their country was headed down the wrong path.

That public frustration was first successfully harnessed by Petro, who gained traction early on in the election season.

“Colombia needs change,” said Torres, adding that he would support anyone other than Gutierrez, running under the right-wing coalition Equipo por Colombia. “‘Fico’ just represents this continuation of what we got four years ago with Duque.”

But analysts and electoral watchdogs also have expressed concern about electoral turmoil and violence.

Last week, Colombia’s Ombudsman’s Office, a human rights watchdog, sent out an alert warning that nearly 300 municipalities in the country are at high or extreme risk of human rights violations and electoral violence.

The watchdog said that nearly half the country faces some level of risk. 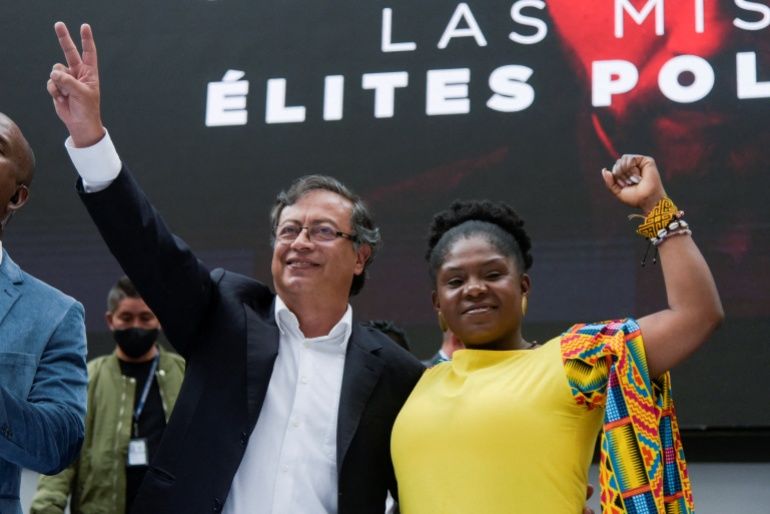 The concerns come primarily from The Gulf Clan armed group, which held nearly a third of Colombia under siege earlier this month after their former leader was extradited to the United States on drug charges.

Meanwhile, Petro and Francia Marquez, his vice-presidential candidate, have had to speak to large audiences behind police shields after alleged assassination plots and threats. “The spectre of death accompanies us,” Petro told the AFP news agency in February.

Others like Elizabeth Dickinson, a senior Colombia analyst at the International Crisis Group, have raised alarm about Petro and other candidates stirring concerns of electoral fraud in the days leading up to the first round.

In a presidential debate before the vote, candidates spent nearly a half-hour talking about concerns about electoral fraud in March’s congressional elections, which Dickinson said were significant and not adequately addressed by the government.

But she also said that candidates have over-amplified the worries as a political tool.

“All of the candidates, regardless of their political persuasions, are laying the groundwork to be able to claim fraud if the result is not what they desire,” Dickinson told Al Jazeera. “This is really dangerous.”

A push for change

But if either Petro or Hernandez is elected, it would follow a larger trend across Latin America of voters turning away from the figures and political parties that have held power for decades.

And in December, Chileans elected former student activist Gabriel Boric – who has promised to reduce endemic inequalities, and focus on gender, Indigenous and environmental issues – as the country’s youngest-ever president.

For voters like Hernandez supporter Ligia del Carmen Roa, who packed up a car of campaign materials just down the street from Petro voter Torres, one thing is evident.

“We’ve been in this same pattern for over 70 years, and we want to break out of it,” she said.

“And right now is the moment.”