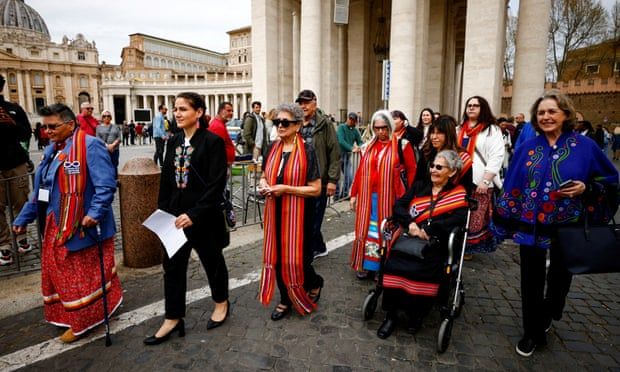 Apology sought after over 1,300 unmarked graves discovered since last May at church-run schools attended by Indigenous children
Pope Francis has heard first-hand the horrors of abuse committed at church-run residential schools in Canada, as Indigenous delegations pressed him for an apology.

Indigenous survivors are visiting the Vatican this week for meetings with the pope about the scandal that has rocked the Catholic church.

More than 1,300 unmarked graves have been discovered since last May at church-run schools attended by Canada’s Indigenous children as part of a government policy of forced assimilation.

“The pope listened … (he) heard just three of the many stories we have to share,” Cassidy Caron, president of the Métis National Council, told journalists in front of St Peter’s Square. “While the time for acknowledgment, apology and atonement is long overdue, it is never too late to do the right thing.”

Francis also held a private audience with representatives of the Inuit Tapiriit Kanatami.

The 85-year-old pontiff is scheduled to receive a delegation from the Assembly of First Nations on Thursday, before a final group meeting on Friday.

The Catholic church in Canada has apologised “unequivocally” to Canada’s Indigenous peoples for a century of abuses at church-run residential schools.

Francis has also expressed his “pain” at the scandal – but has not gone so far as to offer an apology himself.

“We really truly hoped that … (at) this meeting today, that the pope would listen … and hopefully bring an apology when he does arrive in Canada,” Caron said.

According to Canadian bishops, Francis has indicated a willingness to visit Canada, though no date has yet been set.

Caron said the pope had echoed the Métis’ request for “truth, justice and healing”, saying she took that as a sign of “a personal commitment”.

Approximately 150,000 Indigenous children, including Métis and Inuit, were enrolled from the late 1800s to the 1990s in 139 of the residential schools across Canada, spending months or years isolated from their families, language and culture.

Many were physically and sexually abused by headmasters and teachers, and thousands are believed to have died of disease, malnutrition or neglect.

A truth and reconciliation commission concluded in 2015 the failed government policy amounted to “cultural genocide”.

The 32 delegates visiting the Vatican say an apology from Francis in Canada would be “an important step” in the healing process.

“Primarily the reconciliation requires action. And we still are in need of very specific actions from the Catholic church,” said Natan Obed, president of the Inuit Tapiriit Kanatami, who led the Inuit delegation. He cited the reparations the Canadian church has been ordered to pay, as well as justice for victims of a Catholic Oblate priest accused of multiple cases of sexual abuse who is now living in France.
#Pope Francis
Add Comment