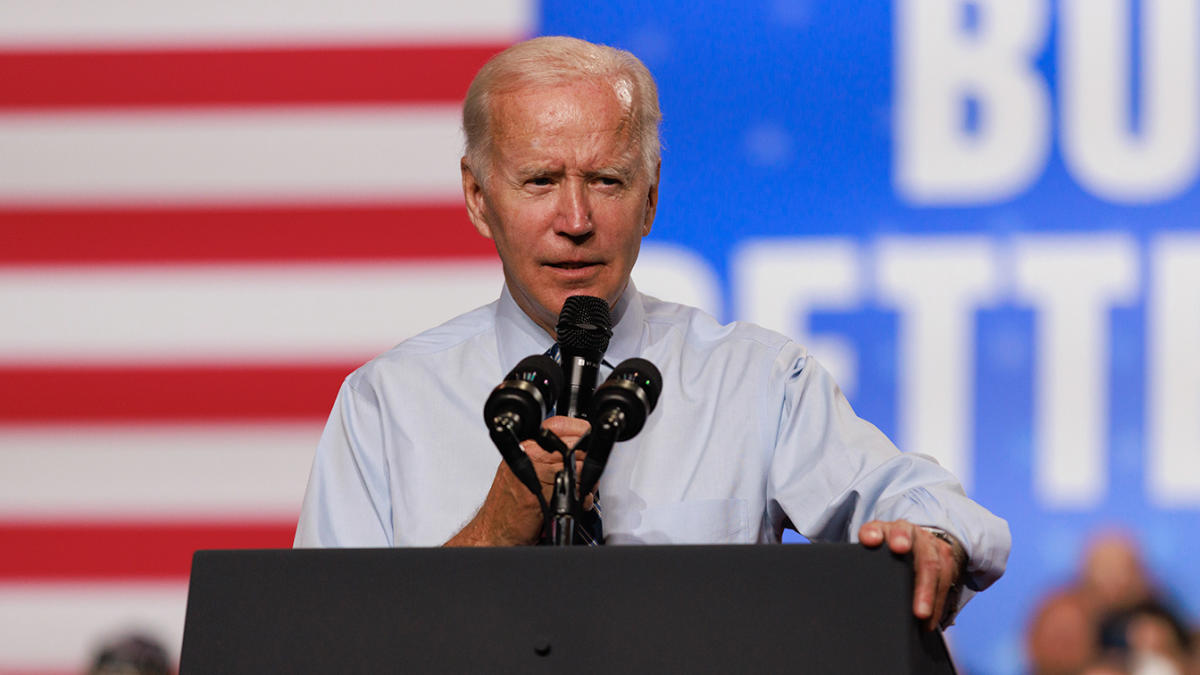 Poll: Democrats lead Republicans among those who say they'll 'definitely' vote in midterms

A new Yahoo News/YouGov poll shows that Democrats are heading into the homestretch of the 2022 midterm campaign with a lead over Republicans among registered voters — including those who say they “definitely will vote” this year.

According to the survey of 1,634 U.S. adults, which was conducted from Sept. 2 to Sept. 6, 45% of registered voters now say they would cast their ballot for the Democratic congressional candidate in their district if the election were held today; 40% say they would choose the Republican candidate instead.

Among registered voters who say they will “definitely” vote on Nov. 8, Democrats lead 48% to 45%.

The new Yahoo News/YouGov results — some of the first national numbers to emerge after the long Labor Day weekend that traditionally marks the beginning of the fall election season — align with a shift that has been underway for weeks now in congressional polling averages. (The previous Yahoo News/YouGov poll, conducted in late August, showed Democrats ahead by a similar margin among registered voters.) 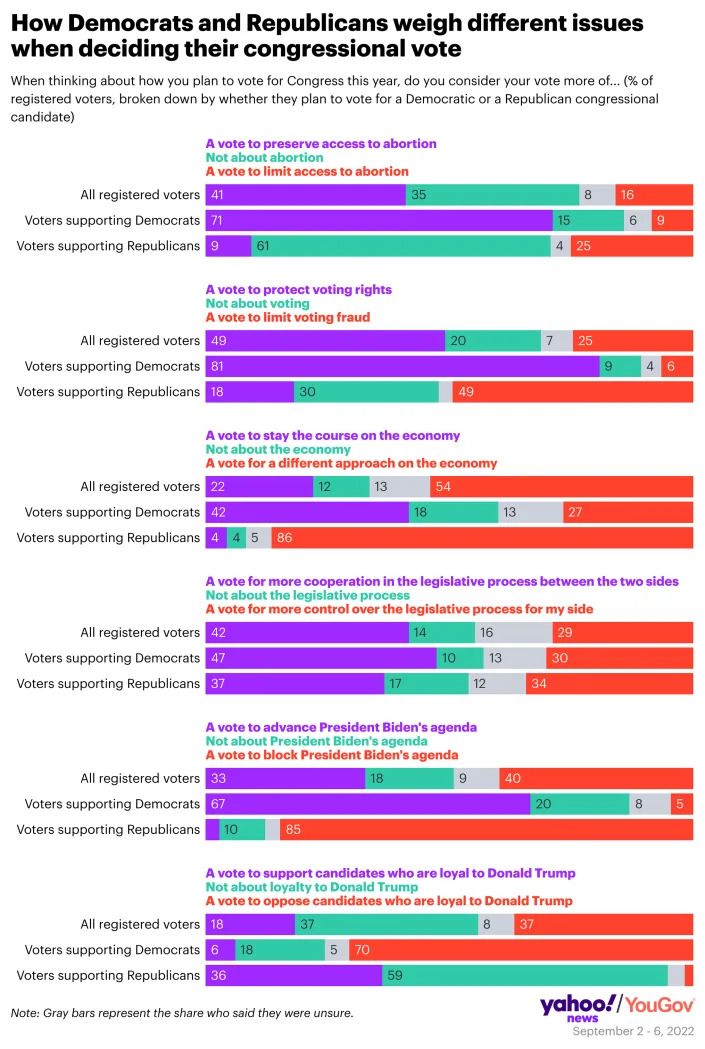 Despite the fact that the president’s party almost always loses seats in midterm contests — and the fact that high inflation numbers continue to fuel discontent with President Biden — Democrats have gone from trailing by an average of nearly 3 points as recently as May to leading by roughly 1 point today, according to FiveThirtyEight. 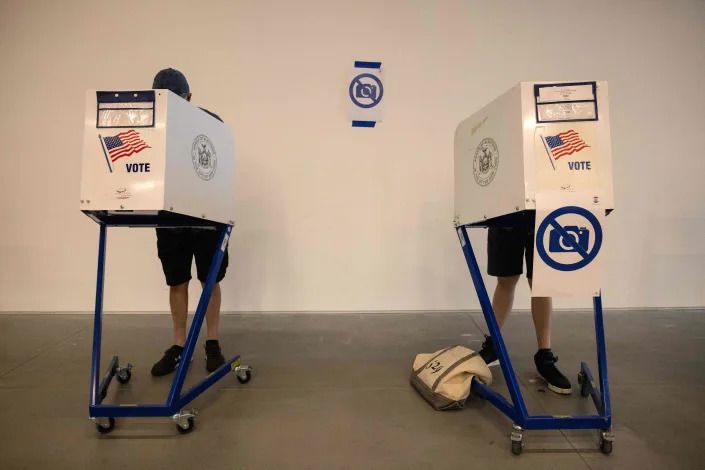 People vote in the New York primaries on Aug. 23.

That reversal hardly guarantees Democrats will retain control of Congress next year. Republicans are still favored to narrowly take back the House; the Senate is a toss-up. But the new Yahoo News/YouGov survey does suggest that two unusual factors are making Democrats far more competitive than they might otherwise be: the end of Roe v. Wade and the endurance of former President Donald Trump.

But Trump and abortion appear to be scrambling that equation. In a series of questions meant to gauge political passion and engagement, Yahoo News and YouGov asked respondents whether they were “angry,” “enthusiastic,” “satisfied” or “dissatisfied” with a series of recent developments.

The two topics that elicited the most anger were “the U.S. Supreme Court overturning Roe v. Wade" (35%) and "efforts to overturn the 2020 election" (35%) — both top Democratic concerns. The corresponding Republican sticking points — “Joe Biden's response to inflation" and "the FBI searching Donald Trump's Mar-a-Lago home" — generated a smaller number of angry responses (28% and 24%, respectively).

Broken down by party, the results are even more revealing. The share of Democrats who are angry about efforts to overturn the 2020 election (61%, up from 59% two weeks ago) and about the Supreme Court overturning Roe v. Wade (59%, up from 56%) is higher than the share of Republicans who are angry about Biden's response to inflation (54%, down from 58%) and about the search of Mar-a-Lago (53%, down from 55%)

In other words, the president’s party seems to be the angrier party this year — not your typical midterm dynamic.

Predicting how such passions will shape Election Day — both in terms of voter preferences and turnout — is pretty much impossible. Yet the Yahoo News/YouGov poll includes some intriguing clues.

It is very unusual for a former president to continue to inspire more antipathy than the current president — but then, no other former president has ever falsely claimed the election was stolen from him and laid the groundwork to potentially run again the following cycle.

A new series of questions that ask respondents to say whether they consider their vote to be “about” either side of an key issue — or “not about” that issue at all — further illuminates the forces motivating voters in 2022.

Abortion is clearly motivating registered voters on the left: A full 71% of those voting for the Democratic candidate say their vote is about “preserving access to abortion”; just 15% say their vote is “not about abortion” at all.

For candidates who have said they want to ban abortion without exceptions, the news is even worse. A 52% majority of registered voters — including 76% of Democrats, 51% of independents and more than a quarter of Republicans (26%) — say they would “definitely vote against such a candidate, no matter what their other views are.” Just 7% say they would definitely vote for such a candidate.

At the same time, more registered voters (60%) say they would either “consider” (38%) or definitely vote for (22%) a candidate who vows to “restore the law as it existed under Roe v. Wade” than say the same about a candidate who wants to ban abortion “with some exceptions for rape, incest and the health of the mother” (11% definitely, 43% would consider it).

Republicans have some things going for them. Among registered voters who say they are paying "a lot" of attention to "this year's election campaign," Republicans lead Democrats by one point, 48% to 47%, on the congressional ballot. The share of registered voters planning to vote Republican who describe their vote as a vote for “a different approach on the economy” (86%) or “a vote to block President Biden’s agenda” (85%) is larger than the share of Democratic voters who describe their own votes in any other way. It’s entirely possible that backlash to Biden — particularly on the economy and inflation — will put the GOP over the top.

Meanwhile, registered voters who identify as independents currently prefer a Republican congressional candidate to a Democratic congressional candidate by a 10-point margin (41% to 31%). Far more say their vote is about a different approach on the economy (62%) than “staying the course” (14%), and about blocking Biden’s agenda (49%) rather than advancing it (19%).