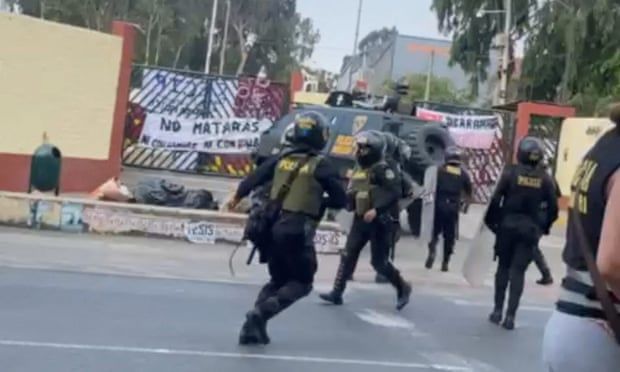 Scores of police raided a Lima university on Saturday, smashing down the gates with an armoured vehicle, firing teargas and detaining more than 200 people who had come to the Peruvian capital to take part in anti-government protests.

Images showed dozens of people lying face down on the ground at San Marcos University after the surprise police operation. Students said they were pushed, kicked and hit with truncheons as they were forced out of their dormitories.

The police raid on San Marcos University – the oldest in the Americas – is the latest in a series of affronts driving growing calls for the president, Dina Boluarte, to step down after six weeks of unrest that has claimed 60 lives, while leaving at least 580 injured and more than 500 arrested.

Amid the demonstrations and with roadblocks paralysing much of the country, Peruvian authorities on Saturday ordered the closure “until further notice” of the Inca citadel of Machu Picchu and the Inca trail that leads to the world heritage archeological site – Peru’s biggest tourist attraction which brings in more than a million visitors a year.

Rescue teams on Saturday had evacuated more than 400 tourists stranded at the iconic site, Peru’s ministry of tourism said.

“This afternoon the 418 domestic and foreign visitors were transferred from the town of Machu Picchu to … Cusco,” the ministry’s Twitter account posted, along with photographs of a train and passengers.

The demonstrations began in early December in support of the ousted former president Pedro Castillo but have shifted overwhelmingly to demand Boluarte’s resignation, the closure of congress and fresh elections.

Boluarte, 60, was Castillo’s vice-president and replaced him after he attempted to shutter congress and rule by decree on 7 December. 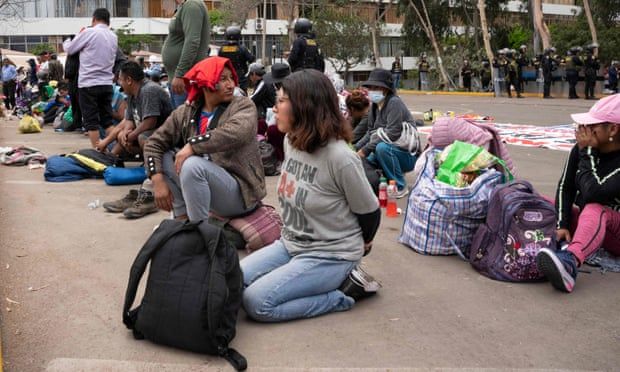 People detained on the University of San Marcos campus in Lima.
Many of those arrested in Saturday’s raid had travelled from southern Peru to the capital to take part in a demonstration last Thursday labelled the “takeover of Lima” which began peacefully but descended into running battles between protesters and riot police amid stone-throwing and swirls of teargas.

In a statement on Twitter, the office of the UN high commissioner for human rights called on the Peruvian authorities to “ensure the legality and proportionality of the [police] intervention and guarantees of due process”.

It emphasised the importance of the presence of prosecutors, who were absent for the first hours of the raid.

Students living in halls of residence said they were violently forced out of their rooms by armed police who busted in doors and used shoves and kicks to eject them.

Esteban Godofredo, a 20-year-old political science student, was given medical treatment for injuries to his leg.

“He [a police officer] hit me with his stick and he threw me to the ground and started kicking me,” Godofredo said as he sat on the grass outside the residence with a heavily bruised, bandaged right calf. 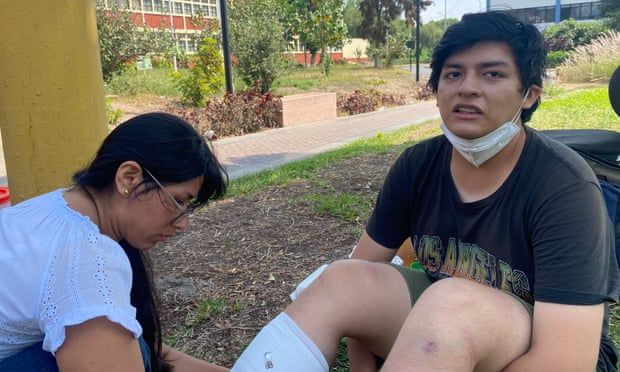 Esteban Godofredo, a student, receives treatment for injuries to his leg.

Videos seen by the Guardian showed confused and terrified students massed outside their halls, some still in pyjamas, as riot police shouted orders and insults. Young men were forced to stand against a wall or kneel in a row.

“They pointed their guns at us, and shouted: ‘Out out.’ We didn’t even have time to get our IDs,” said Jenny Fuentes, 20, a student teacher.

“They forced us to kneel. Many of the girls were crying but they told us to shut up. They didn’t tell us why we were being forced out of our rooms.”

The group of about 90 students, who had remained on campus during the summer holidays to work and study, were then marched to the main patio, a 10-minute walk, where the other people had been detained.

Several hours after the raid, they had not been allowed to return to their rooms which were being searched by police. 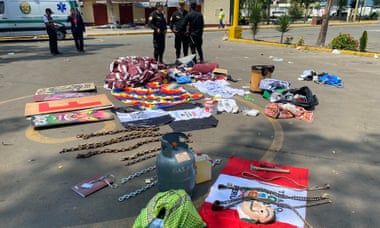 Items that Peruvian police said belonged to detained protesters who were staying on the campus.

“I have been a student at San Marcos [University] and since the 1980s we have not experienced such an outrage,” Susel Paredes, a congresswoman, said as she was prevented from entering the campus by a police cordon.

“The police have entered the university residence, the rooms of the female students who had nothing to do with the demonstrators. They have threatened them and taken them out of their rooms while they were sleeping.”

Paredes said it was a flashback to regular police and armed forces raids on the public university in the 1980s and 90s, when the campus was seen as a hotbed for subversion during the state’s conflict with the Mao-inspired Shining Path rebels.

“We are not in that time, we are supposedly under a democratic government that should respect fundamental rights,” Paredes said.