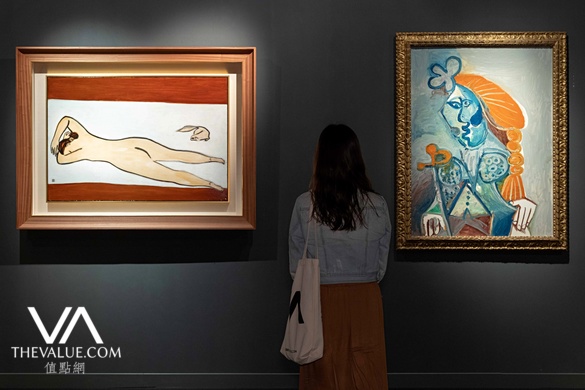 With travel restrictions still ravaging the art industry, auction houses are pulling out all the stops to work out a new normal for their auction lineups, including auctions that feature a mix of genres from different eras.

With travel restrictions still ravaging the art industry, auction houses are pulling out all the stops to work out a new normal for their auction lineups, including auctions that feature a mix of genres from different eras.

Earlier tonight, saw Sotheby’s cross-category evening sale in Hong Kong. Touted by the auction house as one that spans a thousand years of history by great artists from the East and the West.

This season’s modern and contemporary sales were opened with this diverse sale, which achieved a total hammer of HK$317m (US$40.8m), just scraping past the presale low estimate of HK$292m. Leading the five-lot sale was one of Pablo Picasso’s final matador series works, which edged out "Chinese Matisse" Sanyu and sold for HK$140m (US$18m) after fees.

The top lot of the sale was Picasso’s Buste de matador, which was backed by irrevocable bids ahead of the sale to ensure it would sell. The premium lot attracted a total of 15 bids from the specialists gathered at Sotheby’s Hong Kong gallery.

The rather slow proceeding propelled the work past its presale low estimate and finally sold to Kwok’s phone bidder, with the paddle number L0014, for nearly HK$140m with premiums.

At the age of eight, Picasso was taken to his very first bullfight. The iconic Spanish tradition had since then, became a lifelong fascination for Picasso.

The fashion portrait presented in the sale, titled Buste de matador, was painted in 1970, when the artist was 89. In that year, he attended his last bullfight in Fréjus. The very subject matter of bullfighting witnessed the shift from Picasso’s youthful passion for the sport, to a much deeper understanding of time and life.

The lot on offer is the initial work in the final matador series painted as Picasso entered the final chapter of his life between September to October 1970. The last one in the series appeared in a Sotheby’s London sale in 2018, and was sold for £16.5m (US$22.7m) with premiums.

Signed in Chinese and French

Carrying the same presale estimate as Picasso’s matador painting above, the present lot by Sanyu was expected to headline the sale tonight, but instead, only managed to create little spark.

The proceeding started at HK$75m and only saw three paltry bids from the phone bidders represented by again, Kent Law and Felix Kwok. The hammer was brought down at a below-estimate HK$90m. And this time, it was Law’s client, with a paddle number L0002, who took home the painting for HK$105.8m after fees.

Hailed as “Chinese Matisse,” Sichuan-born Sanyu’s paintings are some of the highly sought-after works in the modern art market. Sanyu was among the first Chinese artists to relocate to Paris at the height of the French city’s artistically precocious in the early 1920s, alongside today’s blue-chip names such as Lin Fengmian and Xu Beihong.

Painted in the 1950s and measuring 84 by 122 cm, Nu avec un pékinois features two of the three most favored subjects in Sanyu’s works, namely flowers, animals and nudes. The present work captures the intimate connection between a nude woman in repose and her dog. According to Sanyu’s collected essays, he created only three oil paintings featuring nude figures and dogs. A comparable work titled Deux Nus Sur Tapis Rouge, which now resides in Taiwan’s National Museum of History.

Sanyu’s momentum in the Asian art market, Hong Kong’s in particular, is unstoppable. With all his top three records all set by nudes.

Lot 8003 | Zhang Daqian, Self Portrait with a Tibetan Mastiff

Provenance: (Organized by The Value)

Previously from the Dafengtang Collection

Zhang Daqian was one of the most prolific painters of self-portraits among the artists of his time. His earliest self-portraits date back to when he was 28, and he continuously returned to the genre well into old age.

The present lot, won by a phone bidder with Nicolas Chow (Sotheby's Chariman, Asia) depicts Zhang himself wearing white robes and in profile, recognized by his long silver hair and spiky beard. The juxtaposition of the techniques between the detailed self-portrait and the splashed background of green on gold paper forms a symphonic interplay.

The self-portrait of Zhang is also accompanied by a large black dog, which is believed to be the animal-loving artist’s long-time companion, Black Tiger - from the level of meticulous details given to its features and from the way it looks up expectantly at Zhang in the painting.

The beloved Tibetan mastiff has also been featured in a few other paintings, such as Tibetan Women With Dogs, and Black Tiger below:

Provenance: (Organized by The Value)

Making its second appearance at auction in ten months, the present sculpture of bodhisattva Avalokiteshvara carried a presale low estimate of HK$30m (US$3.86m), a conspicuous 19300% jump from when it showed up in a Sotheby’s New York sale in June 2020, estimated at just US$20,000 to US$30,000.

The sculpture was sold for US$1.34m in the New York sale, when the auction house did not specify which dynasty the sculpture dates back to. This time around, listed as a Song dynasty artifact, the sculpture realized HK$45.7m (US$4.9m), sold to Carrie Li, Sotheby's Senior Specialist of Chinese Works of Art Department.

The present sculpture depicts the Bodhisattva known in Sanskrit as Avalokiteshvara, or in Chinese as Guanyin. The figure is seated in rājalīlāsana ("the posture of royal ease") on what would originally have been a base imitating a craggy rock with its right arm resting on its folded right knee.

Cast by Swiss artist Alberto Giacometti, the bronze figure on offer belonged to a group of several sculptures conceived during this decade that depict a bust set upon a tall pedestal.

Contrary to the use of the pillar to imbue a monumental vibe to the sculpture placed above, it is intended to stress the slender figure’s frailty and to suggest the enormous space surrounding the present figure that is reminiscent of Greco-Roman antiquity.

Sale: ICONS: Masterpieces from across time and space