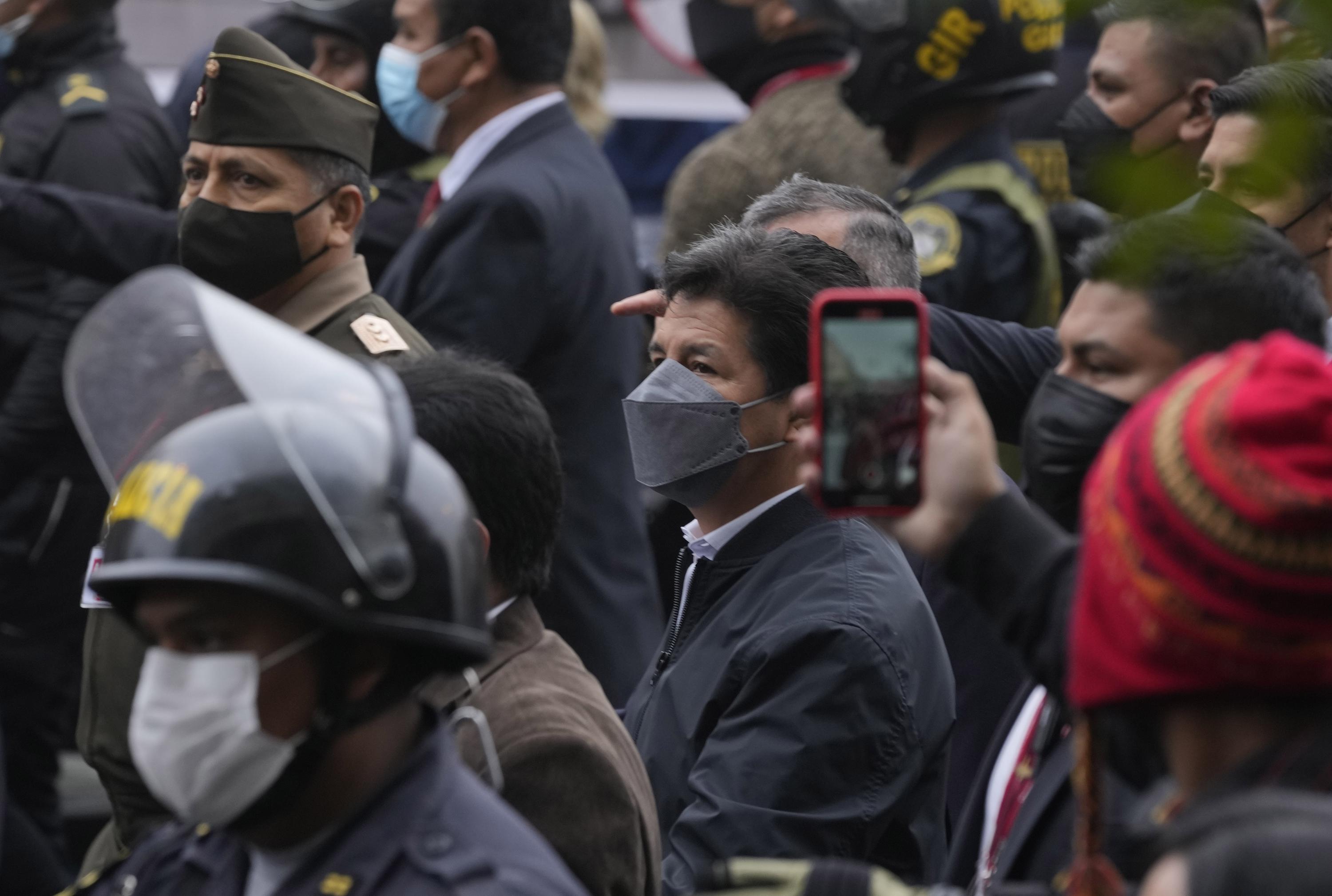 Peruvian President Pedro Castillo appeared Friday before national prosecutors to face questions as part of an investigation against him in which he is accused of being the leader of an alleged criminal conspiracy that received bribes for public works contracts.
Earlier, Castillo said on Twitter he sought to “clear up the accusations and speculations … in an act of transparency with the people and collaboration with the judiciary.”

The president walked through the streets of Lima’s historic downtown, including a main road where traffic was blocked. He was surrounded by security guards and anti-riot police, some on horseback and others on motorcycles.

Castillo shook the hands of several people present, but declined to answer questions from reporters.

Dozens of people shouted “criminal” at the president through megaphones, while others called on him to be incarcerated.

Prosecutors are also investigating the president’s former transport minister, Juan Silva, and six lawmakers. The investigation relates to an accusation that a criminal group led by Castillo had allegedly received benefits from works improperly allocated to some business leaders.

This marks the first time in Peru’s history that the district attorney’s office has investigated a sitting president.

Six former Peruvian presidents who led the country between 1985 and 2020 have been sentenced, indicted or investigated for corruption or money laundering. One of them, Alan García, who was president from 1985 to 1990 and then again from 2006 to 2011, killed himself before he could be detained as part of an investigation into bribes by the Brazilian construction company Odebrecht.

In the 10 months he has been in office, Castillo has so far survived two impeachment efforts in Congress in what is the continuation of a political crisis that began in Peru in 2016 and has led to instability as well as five presidents and three dissolutions of Congress.

Polls show Peruvians are highly unhappy with both Castillo and Congress.

A May poll from the Peruvian Studies Institute shows Castillo suffers a 70% disapproval rating, while Congress stands at 87%. More than half of the population — 67% — believes that the best thing for the country would be for the president and Congress to resign so new elections can be held.

Castillo was sworn into office on July 28, 2021 and his administration is scheduled to last for five years, until July 28, 2026.
Add Comment