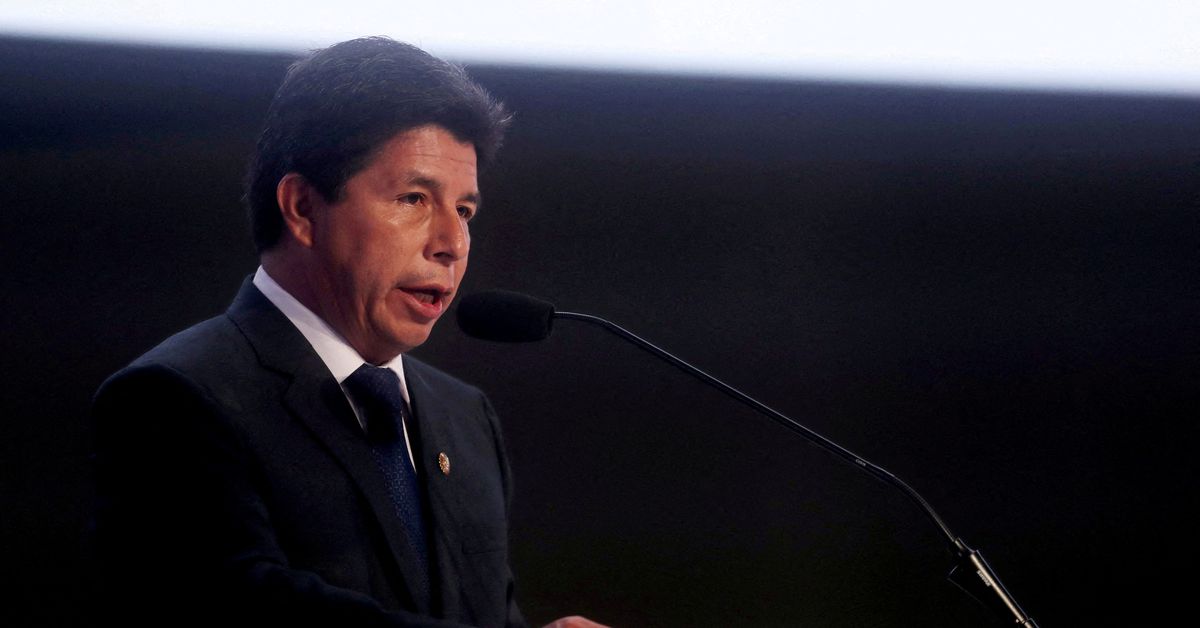 Peru's President Pedro Castillo was detained by security forces on Wednesday, according to images shown in a tweet published by the national police, shortly after Congress voted to remove him from power.

Congress began its session on Wednesday with lawmakers singing the national anthem. A majority of 101 lawmakers in the 130-person congress later voted to impeach Castillo, with the body announcing that Vice President Dina Boluarte will be sworn in as the new President of Peru.

The vote sent a clear message of defiance after Castillo announced plans for early parliamentary elections to work on a new constitution in a televised speech from the Presidential Palace, which also prompted a string of cabinet resignations and fiery reactions from top officials.

Francisco Morales, the president of Peru’s Constitutional Court, urged Boluarte to assume the presidency in a speech prior to the congressional vote.

Boluarte on Twitter also criticized Castillo’s dissolution plan. “I reject Pedro Castillo’s decision to perpetrate the breakdown of the constitutional order with the closure of Congress,” she wrote on Twitter. “It is a coup that aggravates the political and institutional crisis that Peruvian society will have to overcome with strict adherence to the law.”

Castillo’s attempt to dissolve congress was also condemned by international officials, with the United States urging the leader to “reverse his attempt to shut down Congress and allow Peru’s democratic institutions to function according to the Constitution,” US Ambassador in Peru Lisa Kenna said on Twitter.

“We encourage the Peruvian public to remain calm during this uncertain time,” she added.

Argentina’s Ministry of Foreign Affairs expressed “deep concern over the political crisis that the sister Republic of Peru is going through, and calls on all political and social actors to safeguard democratic institutions, the rule of law and constitutional order,” in a statement on Twitter.

The government of the leftist leader had been mired in chaos since inauguration, with dozens of ministers appointed, replaced, sacked or resigned in little over a year – piling further pressure on the beleagured president.

Castillo, a former schoolteacher and union leader, has railed against the opposition for trying to remove him from the first day he was in office. He has accused Peru’s Attorney General, Patricia Benavides, of orchestrating what he called a new form of “coup d’état” against him through her office’s investigations.

In October, Benavides filed a constitutional complaint against him based on three of the six investigations her office had opened. The complaint allows congress to carry out its own investigation against the president.

A cascade of investigations

Elected in July 2021 by a narrow margin in a runoff, Castillo has faced a cascade of investigations on whether he used his position to benefit himself, his family and closest allies by peddling influence to gain favor or preferential treatment, among other claims.

Castillo has repeatedly denied all allegations and reiterated his willingness to cooperate with any investigation. He argues the allegations are a result of a witch-hunt against him and his family from groups that failed to accept his election victory.

The President faces five preliminary criminal investigations on allegations of masterminding corruption schemes while in office. These include prosecutors’ allegation that he led a “criminal network” that interfered with public institutions such as the Ministry of Transport and Communications, Ministry of Housing and Peru’s state-run oil company to control public bidding processes and benefit specific companies and close allies.

Prosecutors are also investigating whether the president led efforts to peddle influence in the process of promoting officers in both the armed forces and national police.

Widening beyond the President himself, these investigations also look into Castillo’s family, including his wife and sister-in-law. First lady Lilia Paredes is being investigated on suspicion of allegedly coordinating the criminal network. Her attorney, Benji Espinoza, has stressed her innocence and argues the investigation against the first lady includes “a number of flaws and omissions.”

And her sister-in-law Yenifer Paredes is under investigation for allegedly being a part of a criminal organization, money laundering and aggravated collusion. She was in custody until a judge revoked her “preventive detention” for 30 months. She too has denied any wrongdoing.

“My daughter, my wife, my entire family have been attacked with the only purpose of destroying me because they don’t want me to finish my term, I promise you I will finish my term, I’m not corrupted,” he said during a televised speech from the Presidential Palace on October 20.

In the same speech, Castillo admitted some of his closest allies should face justice over allegations of corruption, saying, “If they betrayed my trust, let justice take care of them.”
Add Comment