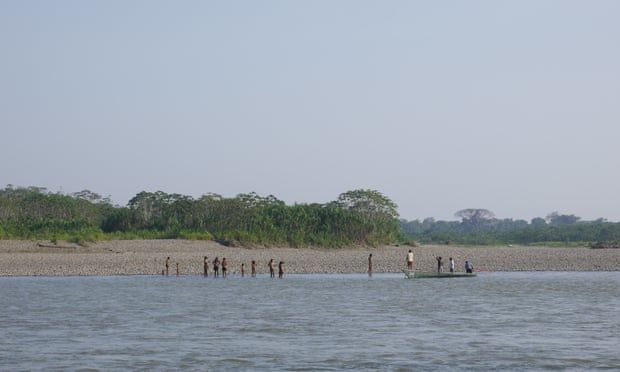 Proposal to dismantle existing reserves for ‘uncontacted’ Indigenous groups quietly pushed amid ongoing political chaos
Amid the political chaos following the ousting of Peru’s President Pedro Castillo, lawmakers in the country’s congress are quietly trying to pass a bill into law that would strip “uncontacted” Indigenous people of protection and dismantle existing reserves created for them.

The bill proposes to modify a 2006 law protecting Indigenous peoples in “isolation” and “initial contact” – those living with little or no contact with the outside world – in order to halt the creation of new reserves and eliminate existing ones, of which there are seven in Peru’s Amazon.

The proposal, put forward by Jorge Morante, a little-known lawmaker, flies in the face of abundant documentary evidence of the existence of up to 25 isolated groups living in the country’s Amazon rainforest, which is second in size only to Brazil’s.

Peru’s umbrella Indigenous federation Aidesep said passing the bill “would cause genocide”, pointing out their “brothers and sisters” were “highly vulnerable and threatened by the increasing pressures on their territories” from infrastructure projects, logging, illegal mining and drug trafficking. Isolated people have little or no immunity to common illnesses such as influenza or the common cold.

The move comes as Peru remains mired in the crisis sparked by President Castillo’s attempt earlier this month to dissolve congress and rule by decree – a move that led to his own downfall. At least 22 people have been killed in violent clashes with security forces, six have died due to blockades, and hundreds more have been injured in deepening unrest that swept the country, according to the country’s ombudsman’s office.

Congress voted on Tuesday to move forward general elections by two years to April 2024 but a second vote is required to make it final. The chamber – easily the most hated organ of a widely discredited political elite – will be closely watched by protesters who are demanding its closure.

But as attention focuses on the political crisis, Indigenous activists worry the chamber could push through the bill to undo the protections enshrined in national and international accords.

Backed by six lawmakers from Fuerza Popular, the party of the thrice-defeated presidential candidate Keiko Fujimori, the bill proposes transferring the power to establish reserves for “isolated peoples” – from Peru’s ministry of culture to regional governments in the Amazon.

The proposal appears to be backed by a group of powerful businessmen in Peru’s northern Loreto region who have financed a campaign using local television, social media and public events, to deny the existence of “isolated peoples”.

Calling itself the Loreto Sustainable Development Coordinator, the group – with the backing of the outgoing regional government and timber, oil and infrastructure-building interests – says Indigenous reserves are a sham and a stumbling block to development in the vast region which is larger than Germany.

Pablo Chota, secretary general of Orpio, who has been fighting for 19 years for the creation of the Napo-Tigre Indigenous reserve on Peru’s northern border with Ecuador, said: “[The isolated people] are our brothers and sisters, we are protecting life.”

The Anglo-French oil company Perenco, which has been drilling for oil in the Napo-Tigre region, opposed the reserve’s creation, filing an injunction earlier this year which it later withdrew. Four reserves are currently in the process of being created, three of which are also in Loreto.