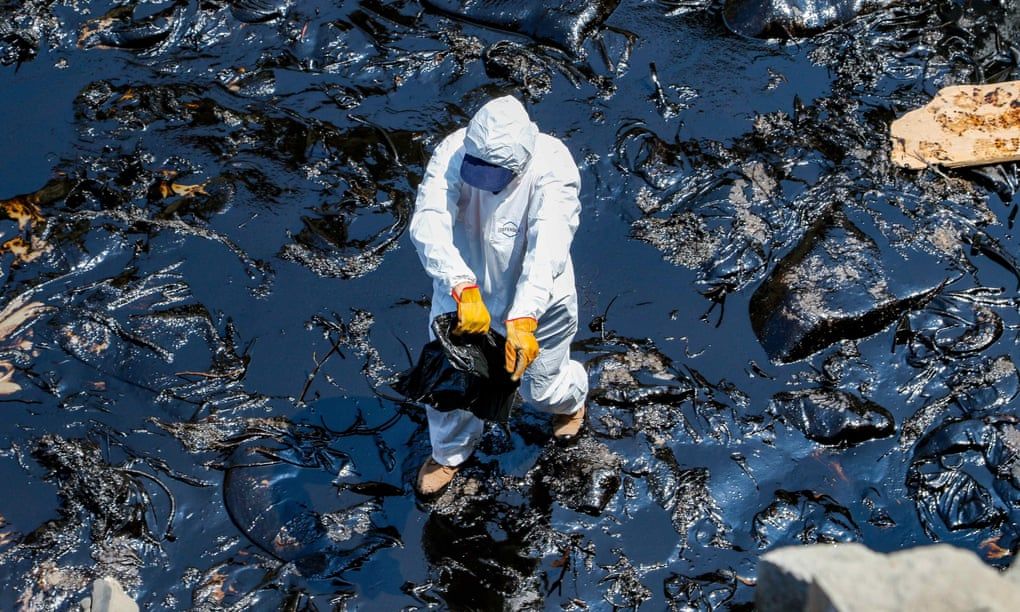 Peru has demanded compensation from the Spanish oil giant Repsol after freak waves from a volcanic eruption near Tonga caused an oil spill described as the worst ecological disaster to hit the South American country in recent history.

Peru’s prime minister, Mirtha Vásquez, told journalists on Wednesday that the Pampilla refinery, run by Repsol, “apparently” did not have a contingency plan for an oil spill.

The country’s foreign ministry called on the company to “immediately compensate” for the damage caused by the spill on Saturday which had inflicted “serious harm to hundreds of fishermen’s families” and had “put in danger the flora and fauna” in two protected natural areas.

Authorities cordoned off three beaches on Monday after 6,000 barrels of oil were spilled during the offloading of a tanker at La Pampilla refinery off the coast near Lima, just north of the capital Lima.

Images on social media and TV showed blackened beaches and dozens of dead seabirds drenched in oil, among them the rare Humboldt penguin, in an area considered a marine biodiversity hotspot.

Officials at the refinery, managed by Repsol, initially described the spill as “limited” and said it was working with authorities to clean up the beaches.

However, there has been public indignation at what has been perceived as the company’s tardy response.

Tine Van Den Wall Bake, a spokesperson for Repsol, denied it should accept responsibility for the incident.

“We did not cause this ecological disaster and we cannot say who is responsible,” she told national radio on Wednesday. 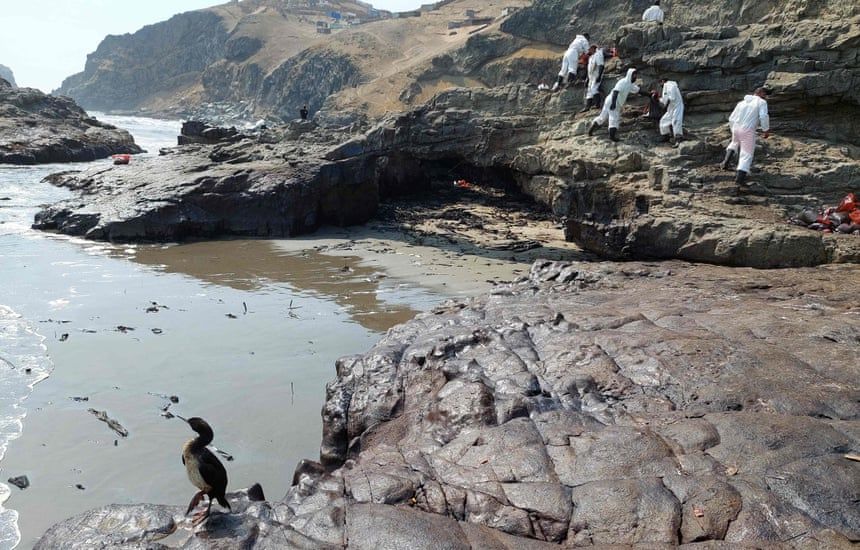 Cleaning crews work to remove oil from a beach in the Peruvian province of Callao on January 19, 2022 after a spill which occurred during the offloading process of the Italian-flagged tanker “Mare Doricum” at La Pampilla refinery caused by the abnormal waves recorded after the volcanic eruption in Tonga. - Peruvian authorities sealed off three beaches on Monday after 6,000 barrels of oil were spilled and demanded compensation Wednesday from Spanish energy giant Repsol over the oil spill.

Environmental groups have criticized the company’s response, as well as that of the Peruvian authorities. The oil was spreading along Peru’s Pacific coast affecting seabirds, seagulls, terns, sea lions, otters and dolphins, Oceana Peru said in a tweet.

“The environmental and social impacts of the Repsol oil spill in the short and long term are devastating, and the company’s response has been weak,” said Christel Scheske, conservation specialist from the Peruvian Society for Environmental Law.

“The oil spill has affected a highly biodiverse part of the Peruvian coast, including two protected areas which are important not only for Peru’s astounding marine biodiversity, but also for over 1,000 artisanal fishers in the region that depend on them,” she said.

“Heavy metals from the crude oil will remain in the ecosystem for many years, rendering fish, molluscs and other marine species dangerous for human consumption, and affecting the entire marine food web,” Scheske added. 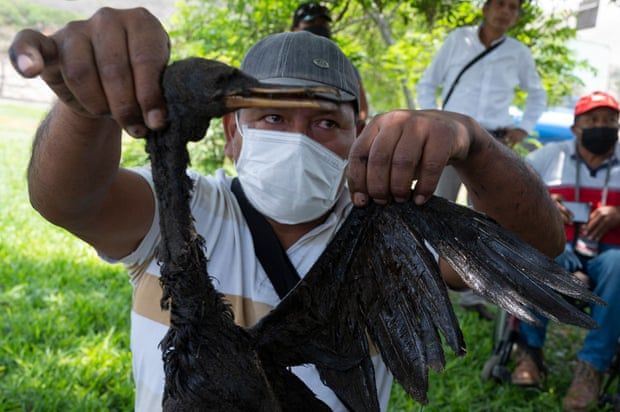 An artisanal fishermen from a community affected by an oil spill on the beaches of the Peruvian province of Callao caused during the unloading process of the Italian-flagged tanker “Mare Doricum”, holds a dead oiled bird in a protest on January 19, 2022 in front of the Pampilla Oil Refinery, responsible for the accident due to abnormal waves recorded after the volcanic eruption in Tonga.

The refinery could face a fine of up to $34.5 million, Peru’s environment ministry said on Monday as prosecutors opened an investigation into the company for environmental contamination.

In a tweet, the attorney general’s office said the spill “is the worst ecological disaster in Lima in recent times, and has caused serious damage to hundreds of fishing families. Repsol must immediately compensate for this damage.”

The energy and mining regulation body Osinergmin has ordered the suspension of operations at the refinery pending an investigation into the causes of the spill.