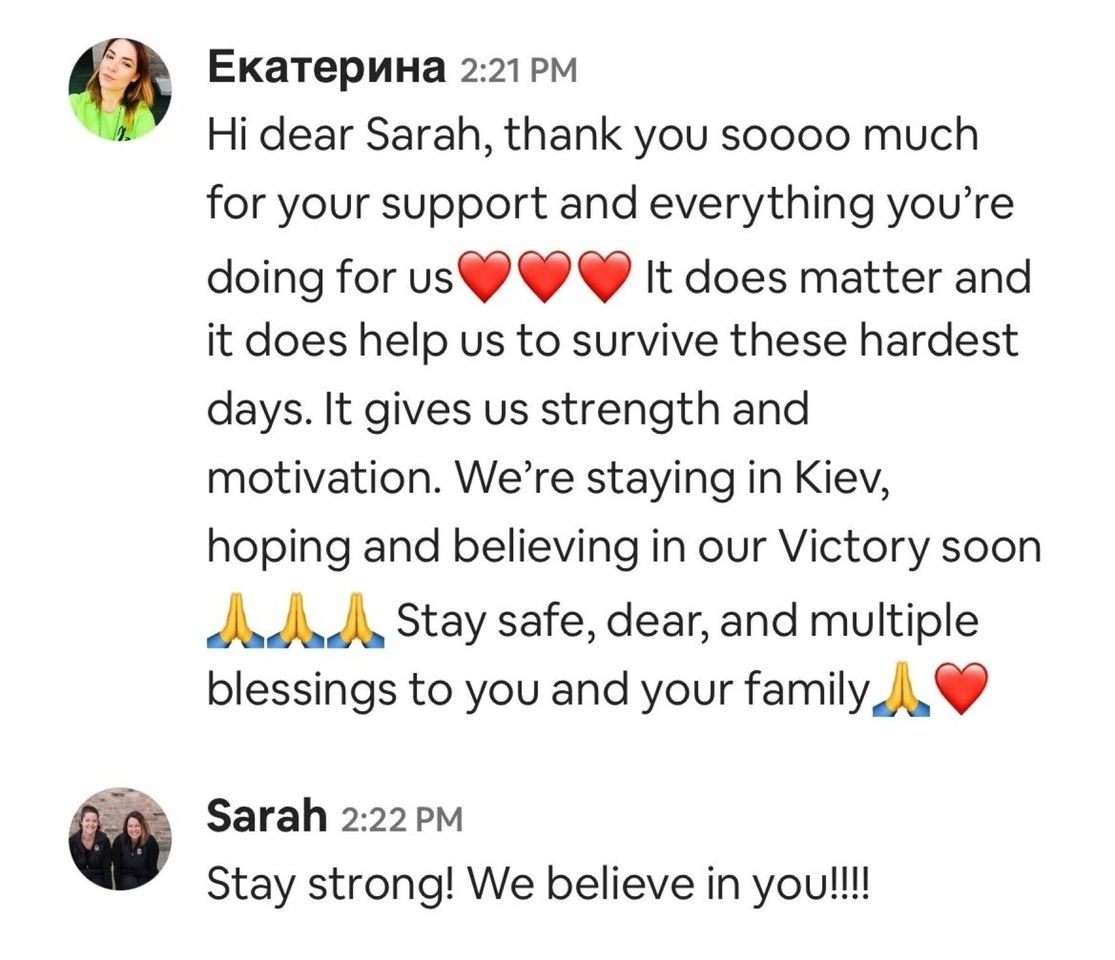 People are booking Airbnbs in Ukraine — not to stay, but to lend their support

As the idea spread, more than 61,000 nights were booked, grossing nearly $2 million. One host in Kyiv says the donations have helped pay staffers who have fled and buy food for elderly neighbors.

Some people have found a novel way to get money to Ukrainians as their country is under attack from Russia: booking immediate Airbnb stays they don't intend to use.


Sarah Brown, who lives in Salt Lake City, is one of those who got the ball rolling in a Facebook group for Airbnb hosts. She booked a stay in Kyiv.

Someone in the Facebook group noted that it was important to support Ukrainians in places other than Kyiv, so Brown booked two more stays in smaller cities, with plans for more.

Ekaterina Martiusheva is the host of the first apartment Brown booked in Ukraine.

Speaking to NPR from Kyiv, Martiusheva says the bookings mean a lot: "These days we do not have any income. We do not have any right to ask our country to help us, because all the country's resources are for the war and for the victory."

Airbnb hosts are paid 24 hours after a guest checks in, so people abroad are booking stays and letting hosts know that it's a gesture of solidarity, and they don't plan to appear.

The idea spread over the last few days, and Airbnb is waiving all host and guest fees in Ukraine for now. On Wednesday and Thursday, more than 61,000 nights were booked in Ukraine from around the world — bookings that grossed nearly $2 million, Airbnb tells NPR.

The bookings have helped build a sense of connection


Brown says the experience has helped her feel more invested in Ukraine beyond the news, by connecting with an actual person — in this case, with an Airbnb host like herself. Brown and her husband own three properties listed on the platform, and she owns a business that operates another 28.

"It makes me feel like I have so much more skin in the game. I am so heartbroken for Ukraine, but I don't know anyone there. And now I care so much about this woman and what happens to her," she tells NPR.

Of course Airbnb hosts may not be the neediest cases. But Brown says there are ways of finding hosts who are likely of limited means, for instance by looking for those who rent out a shared room or live in smaller towns.

Martiusheva says the donations via Airbnb bookings have been valuable because of human connections. "It's not just money, it's the support and encouragement. We get these notes of people who are calling us brave, and it does feel great," she says. "It's just amazing, really."

She has also been directing donors on Airbnb to contribute to a fund for the Ukrainian army as well.

In Kyiv, the donations make up for lost income and help neighbors


Along with her husband from whom she is separated, Martiusheva operates 30 apartments on Airbnb in central Kyiv for property owners who live abroad; most of the owners are not Ukrainian.

Martiusheva says the property owners understand that the money coming in now is intended as donations to help Ukrainian people, and they don't ask for a share of it.

With the money that has come in via Airbnb, Martiusheva is able to pay the six people on her staff of maintenance workers and cleaners. Most of them have fled to western Ukraine, she says, and the money helps them as they're on the move.

She's also using the money to support elderly neighbors with food and transportation, as the price of basic goods and taxis have risen.

The mother of two school-aged children, Martiusheva says she stayed in Kyiv because her parents are in their late 70s and have health problems that make it difficult for them to travel.

But she has also stayed to give encouragement to the Ukrainian army.

"It's hard to protect to an empty city," she says.

Last week Martiusheva woke up to the noise of bombs, helicopters and planes.

But the last three days have been quiet, she says, as Ukrainian forces hold back the Russian army outside Kyiv.

"Only pharmacies and supermarkets work now," she says. "Everything else is stopped. People are just surviving on their savings, and that's it."

The company has taken its own steps to help Ukrainians


While this solidarity-booking phenomenon appears to have developed in a grassroots manner, Airbnb also has its own initiative to provide housing to those in need. The company will offer short-term housing for free for up to 100,000 of those fleeing Ukraine. People can go to Airbnb.org and sign up to host refugees or donate to the cause.

CEO Brian Chesky said this week that the company had suspended its operations in Russia and Belarus.

For Brown in Salt Lake City, the bookings are not meant to replace donations to organizations like the Red Cross that provide crucial aid.

"This is a multiprong approach," she says. "This is just as much about shared solidarity and making sure people don't feel alone, as much as getting money to those who need it most."