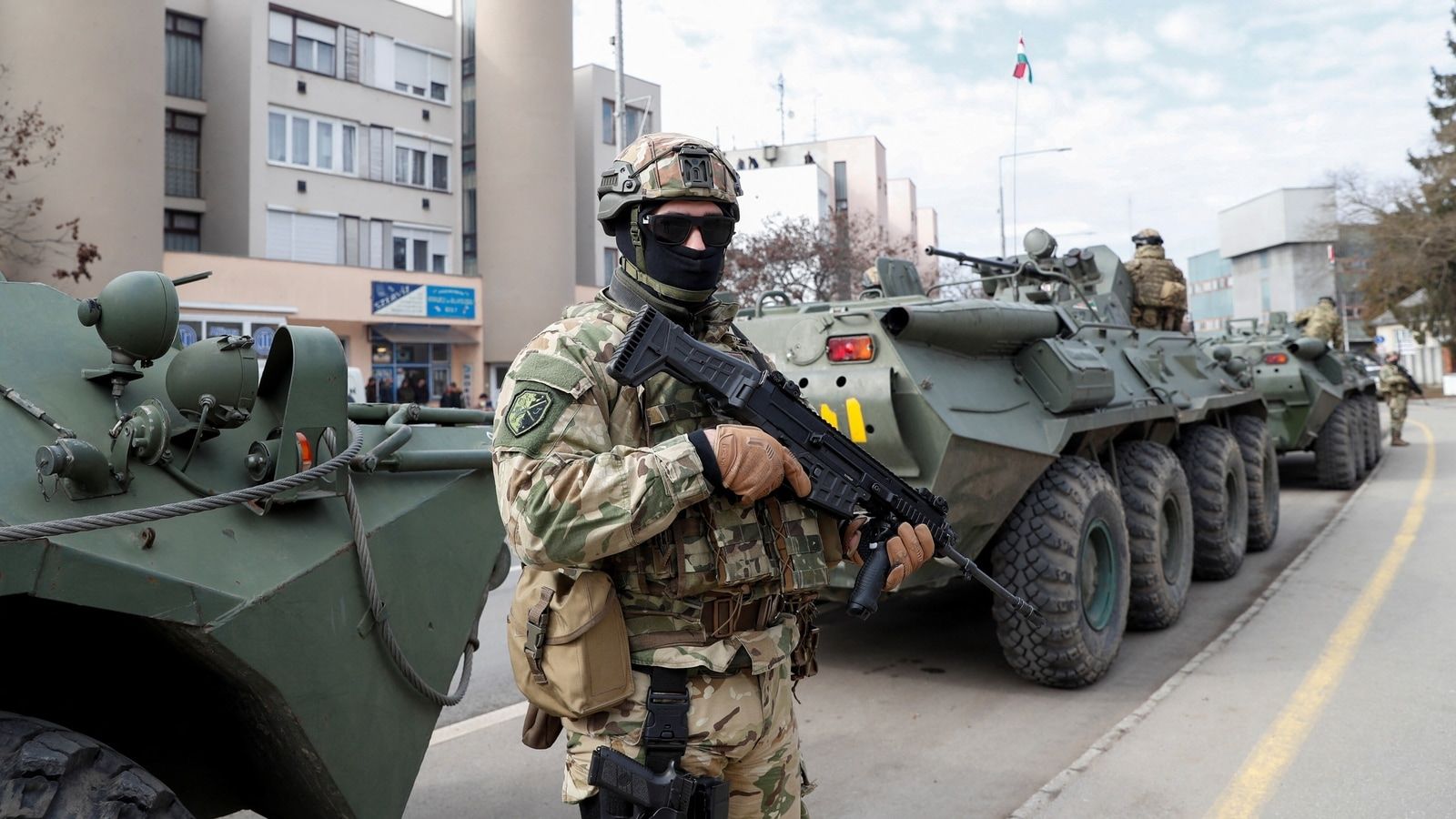 Pentagon official: Russian forces do not have enough men and equipment to encircle Kyiv, let alone take it

They have supply problems, mud, lack of motivation. The Ukrainians do not have to win, they have to survive. The Russians lose every day they do not win.
A Russian airstrike at NATO’s doorstep raises fears of an expanded war.

Russia launched a barrage of airstrikes on Sunday against a military base in western Ukraine where American troops had trained Ukrainian forces just weeks earlier, bringing the war 11 miles from the border with Poland, where NATO forces are stationed on high alert.

Western officials said the attack at NATO’s doorstep was not merely a geographic expansion of the Russian invasion but a shift of tactics in a war many already worried might metastasize into a larger European conflict.

“He’s expanding the number of targets,” the U.S. national security adviser, Jake Sullivan, said of Russia’s president, Vladimir V. Putin, adding that “he’s trying to cause damage in every part of the country.”

In recent days, Russian forces have been broadening their air war right up to the border with Poland, said John F. Kirby, a Pentagon spokesman. Before Sunday’s attack, Russian missiles also struck airfields in Lutsk and Ivano-Frankovsk, cities in western Ukraine near the Polish border. The airport in Ivano-Frankovsk was struck again on Sunday, according to the city’s mayor.

Pentagon and NATO officials reiterated on Sunday that they did not intend to directly confront Russian forces in Ukraine. But they are sending military supplies, and Russia has warned that it regards those convoys as legitimate targets.

The military base that was hit, which is called the International Peacekeeping and Security Center, has been a hub for Western military troops to train Ukrainian forces since 2015. Troops from the United States, Britain, Canada, Poland, Sweden and Denmark, among others, have trained 35,000 Ukrainians there under a project called “Operation Unifier.”

But Western nations withdrew their forces ahead of Russia’s invasion of Ukraine. Since then, the base has been used by Ukraine to train and organize the thousands of foreigners who have arrived in the country and volunteered to help defend it.

The Russian missiles struck the base during the predawn hours Sunday.

“They hit us when we were sleeping,” said one of the volunteer fighters, Jesper Söder, a Swede who had arrived at the base three days earlier. “We woke up to them bombing a building.”

At least 35 people were killed and 134 were wounded in the strikes, including both military personnel and civilians, according to Ukrainian officials. Russia’s Defense Ministry said it killed 180 foreign fighters in the strikes. Neither figure could be independently confirmed.

Two senior Pentagon officials said the U.S. military believes the sites in western Ukraine were struck by cruise missiles fired from Russian warplanes. It was unclear where the Russian bombers were when they fired the missiles. Ukrainian officials said the planes had flown from Saratov, in southwestern Russia.

Until Sunday, the invasion of Ukraine, now in its 18th day, was most notable for Moscow’s indiscriminate attacks on civilian areas, and even as it bombarded the military base in the west, Russia continued to punish ordinary Ukrainians.

In the southern Ukrainian port city of Mykolaiv, a Russian airstrike on a residential neighborhood killed nine people.

And in eastern Ukraine, Russian forces fired on a train carrying Ukrainian civilians, including more than 100 children, who were attempting to flee the violence. The train’s conductor was killed and Ukraine’s national railroad scrambled to send a new train to evacuate the surviving crew and passengers.

In the suburbs of Kyiv, Brent Renaud, an award-winning American filmmaker and journalist working to document the toll the war has taken on refugees, was killed. Mr. Renaud, 50, had contributed to The New York Times in previous years, most recently in 2015.

The United Nations said Sunday at least 596 civilians had died in the war, including 43 children, while another 1,067 civilians had been injured. The U.N. said those figures most likely undercounted the actual death toll. Ukrainian officials said that 85 children had been killed and more than 100 injured.

In the besieged coastal city of Mariupol, Ukrainian officials said Sunday, at least 2,187 people have died since the start of the war. The figure could not be independently verified, but the situation has clearly become dire since Russian forces encircled the city nearly two weeks ago and began trying to pummel it into submission. Eyewitnesses who have managed to communicate to the outside world describe a hellish landscape, with dead bodies on the streets, little food or clean water and no medicine.

President Volodymyr Zelensky of Ukraine has repeatedly requested that NATO members establish a no-fly zone over his country to deter Russian airstrikes, but even after Sunday’s attack on the military base, Western officials rejected his pleas.

Mr. Kirby, the Pentagon spokesman, said that the U.S. military remained concerned about NATO’s eastern flank on the border between Poland and Ukraine and that it was looking for ways to bolster the protection of that airspace. But he said the United States remained opposed to the idea of a no-fly zone.

A no-fly zone, he said on ABC’s “This Week” on Sunday, “is combat — you have to be willing to shoot and to be shot at.”

“President Biden has made it clear that U.S. troops are not going to be fighting in Ukraine,” Mr. Kirby said, “and there’s a good reason for that, because the United States getting involved in combat in Ukraine right now or over the skies of Ukraine right now leads to war with Russia.”

Still, in the coming weeks, NATO plans to gather 30,000 troops from 25 countries in Norway for biannual military exercises, including live-fire drills. The exercises were announced more than eight months ago, but the training has taken on greater significance as the fighting in Ukraine approaches the Polish border and raises alarm across the alliance.

About 10,000 American troops — half of which were deployed since the invasion began — are now stationed in Poland. Late last week, the United States moved two surface-to-air missile batteries there from Germany. And on Saturday, President Biden approved sending an additional $200 million in arms and equipment to Ukraine.

U.S. officials are also looking for ways to resupply and strengthen Ukraine’s air-defense capabilities, which are composed largely of Soviet- or Russian-made systems.

Among the options under discussion are transfers of similar equipment from NATO members in Eastern Europe, though there is concern these nations might then be left vulnerable themselves, U.S. officials said. Defense Secretary Lloyd J. Austin III is scheduled to meet with NATO defense ministers in Brussels this week and then travel to Slovakia, a NATO member located south of Poland on Ukraine’s western border.

American military officials say they believed that, after weeks of pummeling other parts of the country, Russia has begun to target western Ukraine in a bid to shut it down as a base of operations for the Ukrainian air force and a source of weapons and equipment. Arms and aid have flowed into western Ukraine from Poland and Romania.

But the American officials, who spoke on the condition of anonymity, say they also believe that the Russians want to terrorize the refugees who have fled the violence in other parts of the country for what had been relative tranquillity in the west.

As wounded foreigners and Ukrainians flooded hospitals after the attack at the military base, Ukrainian officials said their air defense systems had intercepted 22 of 30 Russian missiles. “The air defense system worked,” Maksym Kozytskyi, the head of the Lviv regional military administration, said at a news conference. But it was not enough, he said, repeating calls for a no-fly zone.

Even in the absence of a no-fly zone, American officials said, Russian jets have been trying to avoid Ukrainian air space when they can, striking Ukrainian targets from Russian-controlled skies to evade the surprisingly effective Ukrainian surface-to-air missiles. Ukrainian forces have shot down at least 15 fixed-wing aircraft and at least 20 helicopters, according to a U.S. official.

When Russian bombers do enter Ukrainian air space, they are mostly flying quick in-and-out missions, officials said. In ideal military strategy, a country would destroy another country’s air-defense systems and then be able to fly freely through the air space. Russia has been unable to do that in Ukraine.

As of Friday, Ukraine still had 80 percent of its air force intact — 56 warplanes — operating out of three bases in the country’s west. Pentagon officials believed that recent strikes there aimed to render those airfields inoperative, but it was unclear how effective they had been.

A senior Pentagon official said that as of Friday, Russians still had not targeted arms supply shipments coming into western Ukraine. There has been speculation that Russia may have been distracted by fighting in other parts of the country, but the stepped-up attacks in the west suggest that this may no longer be the case.

There were also signs that Russia, staggered by sanctions, may be having trouble sustaining its war, and that is has asked China for military equipment and support, according to U.S. officials.

“We are communicating directly, privately to Beijing that there will absolutely be consequences for large-scale sanctions evasion efforts or support to Russia to backfill them,” Mr. Sullivan, the national security adviser, said on CNN on Sunday.

“Russia is starting to talk constructively,” said Mykhailo Podolyak, a Ukrainian presidential adviser and a member of Kyiv’s delegation. “I think we will reach some concrete results, literally, in a few days.”

The Kremlin said it would not rule out the possibility of a meeting between President Putin and President Zelensky. “We would need to understand what the result of such a meeting would be and what would be discussed in it,” Dmitri S. Peskov, the Kremlin’s spokesman, told the Interfax news agency on Sunday.
Add Comment